A fearful email from Malta 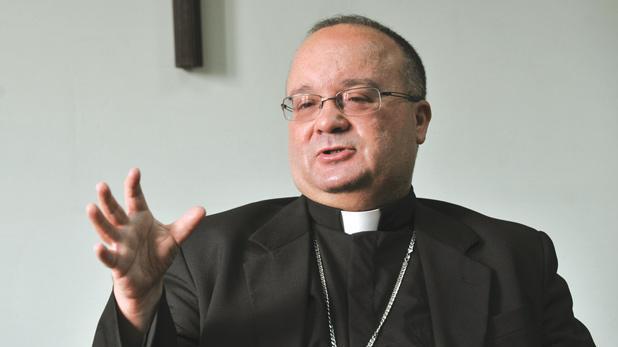 I had this email from a friend in Malta who is concerned about the high handed way in which Archbishop Scicluna is dealing with his clergy over Amoris Laetitia,  I will be grateful if others could verify or otherwise its details. It is very sad that faithful priests are mocked by their bishop, who despite his CDF credentials and the apparent rebuke from Cardinal Mueller has not yet retracted his singular interpretation of the Pope. Several unconnected people have told me similar things by telephone or email.

If any other Maltese priests wish to comment anonymously, I will happily withhold their names before publication they can either comment in the combox or contact me here.

I can understand why many of you might be somewhat afraid.


On Sunday this article appeared in The Sunday Times of Malta: in which Archbishop Scicluna says that he has held 'frank discussions' with his priests regarding the Maltese Criteria on Amoris Laetitia chapter 8.

This is did not happen.

Apparently all parish priests of Malta last Wednesday, 1st February were summoned to a meeting with Archbishop Charles Scicluna held a scheduled meeting last Wednesday, 1 February 2017. They were to attend by SMS text sent from the President of the College of Parish Priests. It was made known, also but not in writing, that the Abp will talk about the Criteria, but no one will be allowed to say anything in return. He started off by saying that he was not he was not planning suspend any of his clergy (many have read this as a subtle dig at Bishop Mario Grech, the Bishop of Gozo, who was reported to have threatened suspension to one of his priests because he found objection to the Criteria - See this link

I know for a FACT that he did threaten to suspend this priest. Mario Grech is known for his bullying tactics: See here Several people have told me this

Many parish priests were disgusted at how Scicluna, while brandishing a copy of the newspaper, openly mocked the parish priest for speaking to the journalists about his concerns. Many said after that if this is how he deals with dissent, then they will not speak to him, and prefer to follow their own conscience in the matter.

It is worth and important to point out, that at that very morning, the interview with Cdl Mueller denouncing the rogue interpretation of Chapter 8 of AL, was published. Scicluna, while mockingly acknowledging its existence, he chose to ignore it completely even though Mueller clearly corrected the Maltese Criteria. This comes from multiple sources.

In the meantime, one of Abp Scicluna's attack dogs, Father Joe Inguanez, who is one of a group of liberal clerics who have plagued the local Church for decades, has written an article in the local press stating that Mueller's comments in no way correct the Maltese Criteria.
See this link:

We are quite desperate here in Malta.

However when is one always bound to follow the instructions of a Pope? My understanding is that in the case of the ordinary magisterium I may think he is wrong but I still have to obey him. However paragraph 3 of Amoris Laetitia says:

"3. Since “time is greater than space”, I would make it clear that not all discussions of doctrinal, moral or pastoral issues need to be settled by interventions of the magisterium."

So clearly AL is not part of the magisterium at all but merely to be interpreted at local level in which case I am not bound to obey the Pope in what, anyway, I think he would claim to be a purely pastoral matter. Perhaps a Bishop though owes a higher duty in obedience to the Pope so you have the situation where a Bishop tells me one thing but I am not obliged to agree with my Bishop.

Pope: It will rain tomorrow.

Bishop: It will rain tomorrow because the Pope says so.

Me: I prefer to wait and see and in the meantime rely upon what the Met Office says.

And if I am right that there is a basic contradiction in what the Maltese Bishops have said how should they be treated:

Aristotle said that against such an individual “it is ridiculous to seek an argument” for he is no more than a vegetable.

The celebrated Arab commentator Avicenna (ibn Sīnā, 980–1037) confronts such as maintain such a contradictory situation with a more severe fate than Aristotle's vegetable reduction: “As for the obstinate, he must be plunged into fire, since fire and non-fire are identical. Let him be beaten, since suffering and not suffering are the same. Let him be deprived of food and drink, since eating and drinking are identical to abstaining” (Metaphysics I.8, 53.13–15).

But apparently Hegel has less of a problem with such contradictions.

Hello Father, only posting this link to affirm the concerns had by our faithful priests; laity are available. Call on us.

No wonder Pope F is so keen on Luther: all this conscience and discernment stuff, along with the ditching of tradition, is pure protestantism.

Father Ray, please check this out - doubleudoubleudoubleumybookoftruthdotcom - it refers to current schism within the church.. begin with the first message from November 9, 2010 , God bless you

"...this principle is is the most traditional of principles: we follow whatever the Pope says."

I simply can't wait to see the results when this principle gets mooted at the next round of the Joint International Commission for Theological Dialogue with the Eastern Orthodox.

I have often used the argument with Mormons that their acceptance that the current 'Prophet' can change doctrines given by earlier 'prophets', is one proof that their religion is false (God being immutable as even the Book of Mormon attests). I guess that I can't use that argument any more. The bishops' opinion that we just follow the current Pope's views (whatever they may be) is the most un-Catholic statement possible. Haven't you heard from any German priests yet, Father?

I have just read the latest from Sandro Magister on Settimo Cielo and the news there is that the Pope is hinting that he is looking at women priests! The suggestion is that maybe the words of St. John Paul II that the Church does not have the authority to Ordain women and that this mut be accepted by the Faithful, may not be the last word on this matter. In other words, his infallible ruling may not be infallible at all because the Spirit could be moving with this 21st century and could be moving along with these times!!!!!
Is that heresy that I can smell amongst that smoke which has entered the Church?

I wonder if today's gospel, Mark 7:14-23, is being read at Masses in Malta today. The last part: 'And he said, “What comes out of a man is what defiles a man. For from within, out of the heart of man, come evil thoughts, fornication, theft, murder, adultery, coveting, wickedness, deceit, licentiousness, envy, slander, pride, foolishness. All these evil things come from within, and they defile a man.”'

Pope Benedict on a number of occasions drew a clear distinction between what his theological opinions were on certain matters, eg, in the books he published when he was pope, and the Church's teaching.

I remember reading in a biography of Cardinal Gibbons (hard'G') of Baltimore that when he was travelling home by ship after Vatican I that declared the infallibility of the Pope, a Protestant passenger asked him, 'Is it true that the Pope cannot make a mistake?' The Cardinal replied, 'Well, he still call me Jibbons!'

I was on a pilgrimage to Malta in 2015 with a group of mostly Filipinos from England and was struck by the religiosity of the people. One of the waitresses in the hotel where we were staying, a widow, approached me and asked me for a blessing. And earlier that year when I was boarding an Emirates plane in Manila to travel to Dublin via Dubai, the pursar asked me for a blessing. She was Maltese. (On both occasions I was wearing my Roman collar, which I have discovered gives people 'permission' to talk to me, especially when travelling). May St Paul, whose memory is still vividly carried by the Maltese people, obtain God's special protection for them these days.

Regarding Sandro Magister's article on women priests he quotes from Father Spadaro's "La Civilita" as follows:

"The historical fact of the exclusion of woman from the priesthood because of the “impedimentum sexus” is undeniable. Nevertheless, already in 1948, and therefore well ahead of the disputes of the 1960’s, Fr. Congar pointed out that “the absence of a fact is not a decisive criterion for concluding prudently in every case that the Church cannot do it and will never do it.”

That strikes me as a non sequitur so typical of liberal thinking.

That would be instant schism, were that to happen.

As to that site I posted in the comment section: doubleudoubleudoubleumybookoftruthdotcom, you can also type in schism, in the search bar, and it will give you relevant messages..

As to that site I posted in the comment section - doubleudoubleudoubleumybookoftruthdotcom you can also type key words in the search bar, such as "schism' , and it will give you relevant messages .. or as I said earlier, begin with the first message (not number 1) but go to the drop down menu .. 31 of 31, bottom of page.. first message from November 9,2010..

"We have one Pope, the present pope - Francis and reminded his parish priest that this principle is is the most traditional of principles: we follow whatever the Pope says. He went on to say that if the next Pope says something else, we will then follow what he says." This position is not a Catholic position at all. If the Pope requested or pursued a policy that was at odds with the teaching of the Church then as Belarmine recommends we would have a duty to obstruct the implementation. For example when Pope John Paul broke the first commandment to which he was bound by kissing Korans and the Assisi events in which Buddhas were put on altars etc we have to quietly resist and limit the damage and scandal.

Clearly it would be "raining spiritually, only we were too sinful to see it". I believe this is now known as "Mottramism".

Your forefathers held out in great sieges before you - and we are eternally grateful for their courage and faith. Please, for the love of God and the salvation of souls, stand strong in Our Lord's divine presence among you.

So many souls need your witness to the constant teaching of the Church. Please do not abandon us to the wolves in sheep's clothing.

May the Immaculate Heart of Mary be your refuge.

In His Most Sacred Heart.