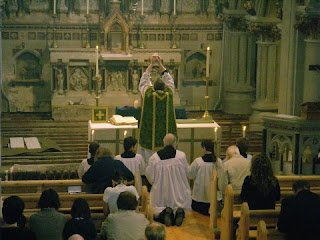 A priest friend asked me if I knew of some good catechetical material to teach about 'ad orientem' worship. Maybe you might be able to help him out in the 'comments box'.


For us the transition from 'contra populum' to 'ad orientem' was relatively easy as it happened in 2009 just after the publication of Summorum Pontificum. The great advantage we had was because of our restoration work we had no sanctuary floor for almost three months, the only sensible option was to celebrate Mass facing East in the narrow space between the pews and the sanctuary. In fact when the boards were laid and we did return to facing the people there seemed a general sense that East was best and at that time was the mind of the Pope, as it had been up until the late sixties the mind of the Church. Very occasionally, like once or twice a year, a visitor of which we have many might express surprise at the orientation of our worship, though the normal, almost weekly comment, is about the beauty of the Mass and the quality of our music.

We did do some catechesis, for Lent we, those took a significant role in parish liturgy studied Benedict's Spirit of the Liturgy but the for the majority of the congregation what convinced them was not catechesis but the actual experience that 'ad orientem' was obviously right and fitting.
at February 06, 2017

Thanks for this Father. It suggests that the scaremongering that is put around re. 'ad orientam' is poppycock.

We began ad orientem here for weekdays in a small congregation of between 2 and 8. We lost one parishioner whose attendance was irregular anyway and a second parishioner whose love for the Eucharist overcame her annoyance with the change in about two weeks. It really is the way to go. So many little things start making sense to both priest and people when ad orientem becomes the norm. We still celebrate versus populism on Sundays.

How fortunate you are to have a congregation willing to accept ad orientem as the norm. I'm sure that the vast majority of our priests would give you some horror stories to show their difficulties

My only criticism is that after having attended Masses for so many years 'ad orientem' when I attend Mass elsewhere I feel quite uncomfortable and wish other parishes had done what you, Father, were brave enough to do.

Short of suggesting other Priests dig a hole at the back of the altar and explain to their parishioners that it would be impossible to celebrate from behind, I don't know how one can change those who regard 'ad orientem' as 'having their backs to the people.' After all we don't expect the bus driver to be looking at us do we? People today seem to have forgotten that the Priest leads us in prayer towards God and is not there to chat to us over the altar.

This weekend I attended Sunday Mass in Notre-Dame Cathedral, Paris and was very surprised when the Archbishop and the many Priests in attendance all turned towards the High Altar after the Confiteor and sang the Kyrie. I have been to Mass there on many occasions over the years but presume this is something new as I have not seen it before. Unfortunately at the end of the Kyrie they all turned back again! Will this be known as a 'half ad orientem?'

David O'Neill - we accept it as the norm because it was once the norm and because it makes sense. It is such a pity that so much time has elapsed since 'the changes'and this has resulted in the hostility which seems to exist today with so many.

Fr.Ray to benefit from your blog once again is a super blessing. Praying for your complete recovery. If any liturgy lovers happen to be in Glasgow next Sunday 12th there will be a Mass in Arabic in the Maronite Catholic rite to celebrate the feast of St.Maron at St. Aloysius' Jesuit (yes!) Church at 7:3Opm.

Cardinal Sarah deals with ad orientem in his book "La force du silence" - due out in English shortly. What he says probably led to his assistants being replaced in toto by Pope Francis.