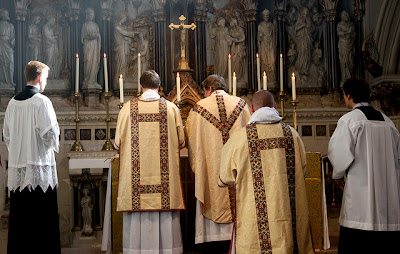 I loathe it when people talk of "Fr Ray's Church" or "Fr Ray's Mass". I loathe it because it suggests a  clericalism which my whole being revolts against. The problem is that although the Mass is the Mass is the Mass, the great difference between the New Mass and the Gregorian Mass (TLM) and indeed the Divine Liturgies of the Eastern and Oriental Rites, is the options.

Though at one time parishes might have had a Liturgy Committee that decided whether or not to sing the Introit or Kum by yah or a hymn of doubtful theology, or which penitential rite, whether to have the Kyrie of the season from the Gradual or the one that goes to the tune of Humpty Dumpty, which Gloria or even which collect, etc., etc., these committees have by and large disappeared or else they continue with the same people they had thirty years ago and continue with their iron grip imposing their choices on everyone else, or else they have disappeared and Father now makes the decisions and imposes his will. Whether it be priest or committee it is a new form of clericalism, moving something that had a certain objectivity to something entirely subject to an individual's or group's whim.


The Missal of Paul VI introduced the idea 'options' into the Catholic Church and these options were imposed from above, by priest or a committee. I understand in the US some dioceses' Liturgy Committees make these decisions and so the whole diocese ends up by singing from the same Mass sheet, despite what be in the Gradual or even the Missal, this is only going to increase following Magnum Principium, Pope Francis Moto Proprio of September this year. 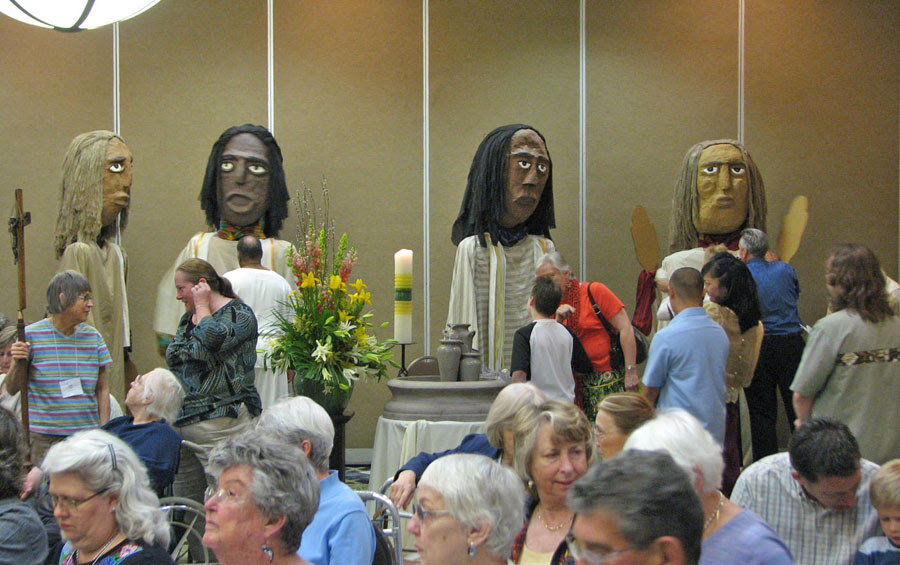 The old Mass reflects the old theology, it is without many options and personal choices. The Old Mass, the Gregorian Mass reflects a certain pneumatic egalitarianism where priest and people served something over which they had no control, they continued to do what their fathers had done before them and which their sons would do after them. They were not the imposers of liturgy anymore than they were the imposers of theology or doctrine or morality, the clergy like the faithful were servants of what had been passed on to them, fidelity rather than innovation was the watch word.

The parallel seems to be the enclosure in 19th Century England, where land from time immemorial was held in common for the good of everyone suddenly became the property of a few individuals, thus robbing the masses not only of a source of sustenance but also of that which symbolised their common culture and rootedness.

The Missal of Gregory the Great, like the more recent liturgies of the East and Orient come from the same school of thought as the writings of the great St Vincent of Lerins.

The "old" theology which we see in Vincent of Lerins (see below) and sometimes better preserved in the East than the West, identifies a certain pneumatic egalitarianism in which the whole Church served the same ends. The Gregorian Mass, like the Divine Liturgy was is part of that and therefore differs from the many optioned Missa recentior, in which it is clerics who day to day choose the preferred option. The old theology seemed to understand the faith was given in its entirety at baptism (What do want? Faith) by the indwelling of the Holy Spirit, teachers and pastors gave it form or helped its recipient to articulate it, they were there to serve it they were certainly not its masters.


Lex orandi, Lex credendi, Lex vivendi: it is not liturgy alone but morals, doctrine that is effected, by this Optionism, in fact every aspect of the Church's life, even its banking and relationships with its employees and the poor. Everything becomes an option because nothing is set, everything is in flux, everything becomes a choice, not according to Divine Revelation because even that has become a choice and option.

This is something that suits and maybe gives rise to the new hyper-uber-Ultramontanists because in the world of options everything depends on the spider at the centre of the web, which is of course as East and West would have said is positively anti-Catholic 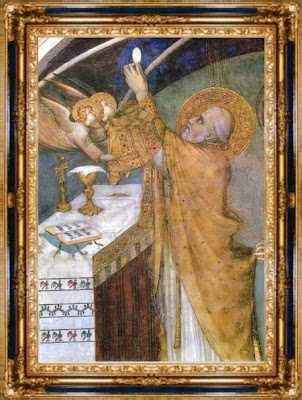 Thanks to Mark Lambert: Saint Vincent Of Lerins once said:
“If one yields ground on any single point of Catholic doctrine, one will later have to yield later in another, and again in another, and so on until such surrenders come to be something normal and acceptable. And when one gets used to rejecting dogma bit by bit, the final result will be the repudiation of it altogether.”

“All novelty in faith is a sure mark of heresy.”

“True piety admits no other rule than that whatsoever things have been faithfully received from our fathers the same are to be faithfully consigned to our children; and that it is our duty, not to lead religion whither we would, but rather to follow religion whither it leads; and that it is the part of Christian modesty and gravity not to hand down our own beliefs or observances to those who come after us, but to preserve and keep what we have received from those who went before us.”

“I cannot sufficiently be astonished that such is the insanity of some men, such the impiety of their blinded understanding, such, finally, their lust after error, that they will not be content with the rule of faith delivered once and for all from antiquity, but must daily seek after something new, and even newer still, and are always longing to add something to religion, or to change it, or to subtract from it!”

“What, then, shall a Catholic Christian do … if some novel contagion attempt to infect no longer a small part of the Church alone but the whole Church alike? He shall then see to it that he cleave unto antiquity, which is now utterly incapable of being seduced by any craft or novelty.”

Many thanks for this very edifying post, Father Ray, and hopes for your continued good health. Personally, I think that we are already at the point of having to cleave unto antiquity, the only question to remain being in which ecclesial community is that best done? Glory to Jesus Christ?

Thank you once again, Father.

This describes precisely why I ended up in a parish that celebrates the Old Rite (which I did not enjoy at the time). It was NOT that I wanted something that reflected my personal taste. It was almost the opposite: I was so tired of watching peoples preferences and political positions play themselves out around the altar in the liturgy.

I wanted to worship in an environment free from all of our personal preferences. The Novus Ordo, and all the jockeying for position (whether in favor of orthodoxy, tradition, or innovation) was just too distracting. I was having trouble praying in that environment. I started looking for the changes as signals, rather than the liturgy.

I actually started off at an Eastern Rite church because I disliked the quietness of the low TLM. It was jarring based on what I was used to. But while worshiping in the Byzantine liturgy, I took opportunities to go to the TLM. Once I assimilated, I gradually discovered its beauty and value. It is the liturgy of the theology of the redemption as seen through the crucifixion, as the Eastern rite is seen through the resurrection. I love both.

The Novus Ordo seems to be a hodge podge which, at its best, is great in that it resembles other things.

My bishop is inaugurating a programme of parish amalgamations, which will, de facto, be laity controlled. Any incoming cleric and laity outside the controlling clique will be subject to the whims of that clique. The bishop has asserted that demographic changes are responsible for the necessary changes - not flight from and alck of teaching of The Faith. Diocesan web-site promoted visits to mosques and synagogues. Adjacent diocese(s) have called-in the Traditional Orders, my own not even enlisting The Ordinariate - for whom I have 'time'.

"Options" began within the Latin church as soon as it was permitted to say Mass in the vernacular. That opened up the musical options and from there on, what happened became a battleground. That which was intended to unite became a source of division and conflict. Whose work was that, one might ask.

What should a Catholic Christian do? Lapsation or walking away is no answer. It is necessary only to remember that the current problem is a specifically Roman phenomenon, and act accordingly depending on one's circumstances.

'It is a long established principal of the Church never to completely drop from her public worship any ceremony office or prayer which once occupied a place in that worship.'

This evening after Mass we said the usual Leonine prayers which were once the norm after every Mass. And yet they were dropped only to be retained after Mass in the Extraordinary Form. What would Bishop Sheen say today?

In the TLM prior 1962, the celebrant on "green" Sundays and weekdays often could choose a third prayer freely (but out of the Missal, of course). I wonder, whether the priest really used this power to choose, and if so, what they choose at those times as final prayer. Does anyone reading this post has ever asked an old priest this question?

The article is a damning indictment of the Ultramontanism of the last 50 years. And so, of Popes and of a Church that have made this approach to the Liturgy normal. It also destroys any reasons for confidence in the Popes. There is no reason for anyonr to trust them - they have turned what used to be Catholicism into just another Protestant sect.

Be careful, you are in danger of losing your faith. If you have lost your confidence in the Papacy, then remember it is based on a particular interpretation of Matthew 16:18 and a disputed account of history and tradition.

There are a quarter of a billion people who belong to a Catholic church which has been untouched by the Second Vatican Council, where the liturgy is invariably celebrated in a worthy manner, and which has produced a vast harvest of saints, most notably in the twentieth century.