Rosary: against the Pope? 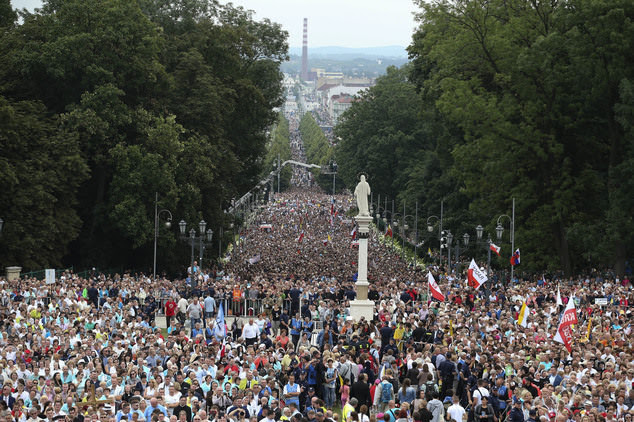 Today millions of Poles are going to the peripheries of their country to say the Holy Rosary, which is a wonderful way to celebrate the feast of the Holy Rosary, it is also a demonstration of the power of the Polish Church. Could our English bishops or the Germans across one of Poland's borders be able to motivate such numbers of people?

The Feast of Our Lady of the Rosary is of course 'political', it marks the destruction of Islamic forces at the Battle of Lepanto, in the same way the importance of the conversion of Languedoc through St Dominic and the Rosary was important, because of the need to have strong Christian Lords on the borders of Christendom to counter the insurgence of Islam on the Iberian peninsula.

One political strand which I find interesting are the ecclesiastical politics of this event in Poland. Though Polish bishops would deny this was an anti-immigrant demonstration, the borders with Russia and the tensions there since the rise of Russian aggression against Ukraine and its other neighbours are as much a concern as the immigrant crisis. In Poland national identity is linked to its Christian identity. The British media see this event as an indication of Poland's far rightness.

For Catholics there has to be the question, "What would Pope Francis say? " though he has backtracked on open borders, as has Mrs Merkel, it seems pretty likely he would strongly disagree with the Polish bishop's and their people's actions. Yet the Polish bishops seem often in strong disagreement with the Pope, over Amoris Laetitia and JPII's magisterium, as much as over the issue of borders.

Here, a small group of Poles and their families want to come to the Church today to join their Rosaries to that of their compatriots, one of them said it was important to him because, "The Pope was so opposed to closing borders to immigrants who do not share Polish culture". I suspect he might oppose the Pope on numerous other issues, including those mentioned in the Filial Correction.

So for him and presumably other Poles the Rosary today is in part in opposition to the Pope Francis.

Today I spent 2 hours in a packed Church in Poland. The borders were all too far away. We prayed all 4 mysteries. Politics did not crop up. There were prayers for the Pope.

"The British media see this event as an indication of Poland's far rightness." Well, they would, wouldn't they.

Even though I am not a Pole, I will say another Rosary today in Solidarity with them.

I wouldn't say that this is a case of the Rosary against the Pope. Isn't Pope Francis just another human being when it comes to prudential matters such as topical politics? In these matters, is it not so that Pope Francis receives no special graces or favours or am I in error?

Event met with ex cathedra silence. Not one word of encouragement or comment.

Michael, I am sure does receive special graces but the Church teaches quite clearly grace can be resisted, especially through hardness of heart.

This Rosary, like every authentic expression of the love of God, represents resistance to Pope Francis to the exact extent that Pope Francis himself resists Almighty God--no more and no less.

More clarification: 1/ The event was organised by the foundation of two laymen running Protestant-like apostolate (organising spiritual retreats, promoting aberrations like the so-called slaying in the spirit, pseudo-charismatics in the type of fr. J. Bashobora and the above-mentioned visioners of Medjugorje, 2/ For unknown reasons the foundation has a wide support in the Polish Conference of Bishops (imagine somebody without connections who goes to the Bishop Conference to ask for putting at his disposal several hundreds of churches across Poland - for his planned event - whatever ithe subject of such event would be). 3/ The Polish Conference of Bishops is well known for their modern tendencies (including such pioneering initiatives as day of Mohammedanism and Talmudic Judaism in churches in Poland - every January for almost 20 years). 4/ The whole action has no connection with the battle of Lepanto whatsoever, nor with the traditional Rosary of St, Dominic and St. Pius V, promoting mldern JPII version of the prayer, 5/ The whole matter shows two parallel, coexisting things - huge amounts of good will in the Polish nation (simple people who went to say the Rosary) and the incredible mess in the Church, also in Poland.

It's really time to stop saying that the luminous mysteries are not authentic. Get over it.

"nondraco" said (amongst other things) : “4/ The whole action has no connection with the battle of Lepanto whatsoever, nor with the traditional Rosary of St, Dominic and St. Pius V, promoting modern (I corrected this, HMcL) JPII version of the prayer…”

Quite frankly, this is nonsense. Not being a linguist I have had to rely on Google translate, but the meaning of the statement on the organiser’s website is still clear enough:

“The Great Prayer is scheduled for 07.10.2017 ,
at the Feast of Our Lady of the Rosary (set up after the great battle of Lepanto, where the Christian fleet overcame many times the Muslim fleet, saving Europe from Islamization).
On the first Saturday of the month (when the devotion to the Immaculate Heart of Mary requested for us as a rescue for the world is celebrated),
in the 140th anniversary of the apparitions of Our Lady of Gietrzwald (the only recognized Polish Marian apparitions, Our Lady asked penance and daily rosary),
on the 100th anniversary of the Apparitions of Fatima (great, ever-present revelations in which the Virgin Mary transmits a spiritual program for the whole world),
on the eve of the 100th anniversary of Poland's independence (Freedom is given to us; God and only with Mary we are truly free, independent).

On this day we will go to the borders of Poland and we will pray on the rosary. Through this unprecedented prayer of the Rosary, we want to show the faithfulness and obedience of Mary, who tirelessly calls us to recite the Rosary. We also want to apologize and pay for all blasphemy, insults against the Immaculate Heart of Mary. We wish to implore by the intercession of the Mother of God to save Poland and the world.”

I am in solidarity with the Polish people praying the Rosary! And yes, I would say they are praying for multiple intentions. I don't think they are praying 'against Pope Francis personally' they are praying against his initiatives which are anything but Catholic. They as I, are most likely against his promotion of anti Catholic directives, NOT against him and the office he represents. The distinction must be made.

@ Hugh McLoughlin
"The whole action has no connection with the battle of Lepanto whatsoever, nor with the traditional Rosary of St, Dominic and St. Pius V, promoting modern [autocorrection] JPII version of the prayer"
"Quite frankly, this is nonsense"
----
Prove your point, I can easily prove mine.
ad. 1/ ad. Lepanto - the website you quoted refers only to the genesis of the feast (of the Holy Virgin of Rosary) on the 7th of October when the event took place. If you have spare time - please check an official prayerbook of the event (on the website of the foundation) - you will wind no reference to Lepanto, islam or islamisation of Europe. The Polish Conference of Bishops promote the so-called "refugee" migration to Europe and are at odds with simple Catholic faithful in that regard and would not allow the prayer in such purpose as avoiding islamisation (as western alt-right websites label it)
ad. 2/ St. Pius V, St. Dominic & traditional Rosary
The organisers inserted the so-called luminous mysteries in the prayer during the event (even as John Paul II made them optional). You probably know the main document of St. Pius V regarding the Holy Rosary - Cosueverunt Romani Pontifices (link to English translation: http://www.papalencyclicals.net/pius05/p5consue.htm) where you may read: "...so Dominic looked to that simple way of praying and beseeching God, accessible to all and wholly pious, which is called the Rosary, or Psalter (sic!) of the Blessed Virgin Mary, in which the same most Blessed Virgin is venerated by the angelic greeting repeated one hundred and fifty times, that is, according to the number of the Davidic Psalter (sic!), and by the Lord’s Prayer with each decade. Interposed with these prayers are certain meditations showing forth the entire life of Our Lord Jesus Christ, thus completing the method of prayer devised by the by the Fathers of the Holy Roman Church. This same method St. Dominic propagated ...". John Paul II introducing 50 more Ave Maria broke with the above almost 1000 years long tradition. The tradition of St. Dominic, St. Pius V and Lepanto. Organisers of the Polish action followed him with the several years old version of the Holy Rosary.

Our Lady of Fatima requested that we pray the Rosary daily and wear the Brown Scapular. We still have not received the full third secret which has to do with apostasy and the consecration of Russia was never done properly. Consecratio - World Group for Consecration of Russia and Fatima Message - https://www.facebook.com/groups/329670727086733/

Well I said my rosary specifically for the conversion of Muslims and in solidarity with the people of Poland. What others do or did, I have no control over. I simply know what I did.