It's What Cardinals Do 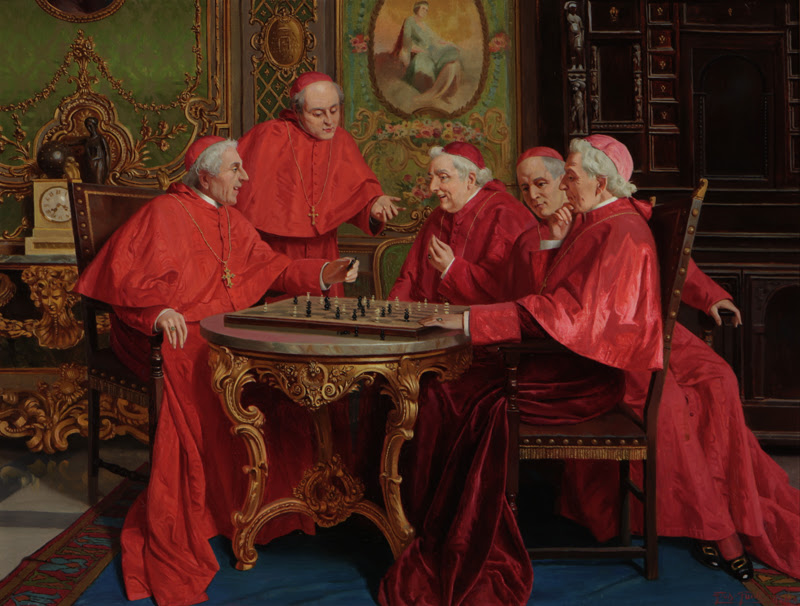 Apparently, just before the last Conclave Cardinal Murphy O'Connor held a meeting for Anglophone Cardinals at the Venerable English College, just opposite in the window of a restaurant in full view sat Cardinal Pell ostentatiously noting the names of those who turned up, he himself had not been invited. Pell was obviously totting up who was in Murphy O'Connor's gang and Murphy O'Connor was obviously trying to extend its influence. These meetings were happening at colleges, universities, and interestingly, embassies through out the pre-Conclave period they are as much part of the pre-Conclave season as the official gatherings, the Congregations, organised by the Cardinal Dean, nothing in law forbids them and little governs how they operate, except good taste.

In the time of John Paul's long period of dying they were happening on a more ad hoc basis over a much longer period, similarly they were taking place from the period of the announcement of Benedict's resignation.

There are still stories going the around on the internet that the canvassing that took place before the last Conclave somehow invalidated the election of Pope Francis, I can't emphasise enough it really is nonsense. What happens during the election is bound by strict rules to maintain secrecy but they govern Conclave itself, those thinks that happen behind locked doors, presumably to stop the faithful from being scandalised and protect the new Papacy beginning in the shadow of scandal.

Certainly Pope John Paul established rules governing what happened inside the Conclave, the new rules were necessary because no longer were elderly Cardinals to be literally locked away and living in the makeshift unhygienic airless garrets and galleries in and around the Sistine Chapel. This is why John Paul built Santa Martha, it was for Cardinal Electors, not another Papal residence. Using it means Cardinals are bussed from there to the Sistine Chapel and rather than being served cold food by a few stewards, mainly clerics, the whole lay staff of what is really a luxurious hotel are employed, together with an increased gang of others to ensure they are kept incommunicado. Modern technology of course makes this much more difficult than a hundred years ago.

Amidst the changed circumstance John Paul's rules attempt to maintain a retreat like atmosphere in the Conclave and for its proper ordering, and yes there are rules against causing scandal to the faithful by openly soliciting votes for individuals; putting up posters or adverts on the television for example but what actually happens or did happen is bound by secrecy on pain of excommunication, so no-one really knows.

Before the Conclave, especially during the period of Congregations, their Eminences are free to do what they always have done. During the Conclave today they are less likely to be intimidated by foreign armies or starved into making a decision and who nowadays would even contemplate removing the roof of the Sistine Chapel if they were dilatory in their decision making.

The rest of the time, what do Cardinals do? Years ago I asked the disagreeable Cardinal Daneels this in an attempt to make conversation, his reply was short, "We look for the next Pope". It would be a fool who thinks that when Cardinals meet they do not talk about the state of the Church and who might best deal with it, or most probably who are the most unlikely candidates to solve its problems. It would be a dereliction of duty if Cardinals didn't do this, or if they didn't introduce to their friends someone who they thought might be overlooked in the next Conclave.

I hardly think that Cardinals Mueller, Burke and Sarah discuss the weather and the use of the doctoral birreta in the Rite of Braga or kitten pictures on Facebook when they are in private conversation, or at least most of us would hope not. One of the reasons for Cardinals coming to Rome other than being a splash of scarlet at Papal events is to discuss the succession and lobby for or against their preferred candidates with all the scheming and guile one would expect of high ranking clerics.

Thank you for clarifying this Father Ray. I had read the reports that seemed to indicate that the discussions that took place before the Conclave should not have taken place thus possibly invalidating the election of Pope Francis. I am grateful for you for explaining that this was normal procedure and consequently Cardinal Cormac did not act against the rules as I had been led to believe.

"Ay, marry, is't:
But to my mind, though I am native here
And to the manner born, it is a custom
More honour'd in the breach than the observance." - 'Hamlet', a Tragedy

Fr.Ray, I'd be very interested in your thoughts on this article by Elizabeth Yore for The Remnant Newspaper if you wouldn't mind. Thank you.

Fr. Blake's comments would be more convincing if he quoted paragraph 81 of Universi Dominici Gregis, in which the penalty of excommunication latae sententiae is levied on those who make "any form of pact, agreement, promise or other commitment of any kind which could oblige them to give or deny their vote to a person or persons", and explained how the specific accusations made against the St. Gallen Mafia, and the actions they have admitted, do not violate this law, and if they do violate the law, how an excommunicated cardinal can validly vote in a papal election. Because, you know... that's what's being alleged.

HPE,
What aspect of it?

Matt,
I think that is simply explained but only by setting it in the context of previous legislation - law in the Church has its own hermeneutic, it does not come ex nihil, it must be understood, can only be understood when set against previous legislation and judgements. These words, "any form of pact, agreement, promise or other commitment of any kind which could oblige them to give or deny their vote to a person or persons&quot reflect the instructions for previous Conclaves when Electors votes were 'owned' by the Emperor of Austria or could be coerced by another power (like the Nazis, or Communists or Masons).

It might be profitable to examine the background and legislation of Pio X following the 1903 Conclave, you might find a reflection of these words, as I say, in order to be understood, they need to be seen in context.

Besides, how could your interpretation ever be implemented as the same legislation forbids discussion of what goes on in the Conclave under sentence of excommunication? It simply doesn't make sense and could never be binding - the Churches law isn't irrational, or at least not until now.