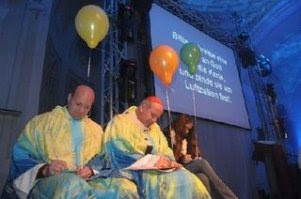 I am rather intrigued by Cardinal Koche reported words in L'Osservatore Romano on Ecclesiae Universae and the reform of the reform. Interesting that he is President of the Pontifical Council for Promoting Christian Unity. The future of Christian unity is about recovering a common Tradition with members of the ancient Churches rather than looking to a future with the 16th century Protestant ecclesial communities. One of the obstacles to this on our part is the hermeneutic of rupture, the disharmony with our common history, symbolised by liturgical rupture.

One of the difficuties of the style of worship used at Mass over the last forty years is that it was difficult for many to recognise what happened in Church with what they do at home when they prayed. This dychotomy alone I suspect caused many to lapse. In most parishes Low Mass, with its profound silence, was all that was on offer, in larger parishes High or Sung Mass was usually left to the curates, with the Parish Priest hardly ever saying it. It was Low Mass that formed the spirituality of both priests and people. I don't believe the VII Fathers intended what we ended up with what we have. They certainly intend some vernacular and I suspect their real intention was some blurring of the distinction of Low and High Mass. Their intention was to open up the treasures of the liturgy and form a liturgical people who participated fully in the liturgical life of the Church, hence the abreviation of the Divine Office.

It is prayerfullness within the the liturgy, not alonside the liturgy seems to be the aim of the Reform of Reform. It was prayerfullnes that marked the Holy Father's liturgical celebration to Britain, and that prayerfulness was plainly recognisable both by Catholic and non-Catholic commentators in a way that the dancing, hand waving, wordy style of liturgy is not.

Cardinal Koche has spoken about mutual enrichment and yet Universal Ecclesiae clearly forbids modern innovations, such as Communion in the hand, female servers. Yes, there will be a new missal, including new Prefaces and commemorations of new saints etc. but the Usus Antiquior seems not to to be reformed in a radical way. So in what way will mutual enrichment take place and how will we move towards a single Roman usage which Koche speaks of? I don't think details are that important but finding someway of combining the best of the two usages is important.

As far as the Usus Antiquior is concerned, it is important to remember High Mass is normative; Low Mass though most usual, should be seen as an exception, the reforms from Pius X through to Pius XII seem to encourage the non-passive involvement of the faithful. The expectation is that the people are at least singing the Ordinary and dialogues, understanding the texts that are used, so these, not a parallel or personal devotion are  the underpinning of the Church's life. At its best this happens in the Novus Ordo. The problem is it rarely happens. Antiphons are replaced by hymns, what should be sung prayerfully is said in a rather perfunctory way, with little personal prayerful engagement. What should be a prayerful encounter with God is not, and easily slips into a celebration of the community, or worse, the celebrant.

Speaking personally, I would have low Mass every time. It is like resting by the quiet stream of living water. Pure balm. I would not be too keen to overestimate the importance of "active" participation. The centre is Christ and His sacrifice for us. The Mass is still of infinite value in and of itself whether we are even present or not. We come as beggars deserving death to our good God of infinite mercy Who seeks any pretext upon which to lavish life upon us if we but turn to Him. Let's not pretend our sheepy bleeting is terribly important!

On the other hand there is a very goodfarmer who looks after sheep near to me. When the sheep see him at the gate they all come running down the hill to him bleeting. It has often struck me how delightful that must be for the farmer and how our Lord the good shepherd might feel the same.

What do the ancient Churches have that the ecclesial communities do not?

Answer: Communion with the Soul of Christ.

It is ontologically the substantial form of His glorified Body, the principle which determines it as countably one. It is also, physiologically, the driver of His Body's vital processes through the brain stem, the organ which integrates and co-ordinates the sub-systems of the living organism.

But the Soul of Christ, having finite essence and limited existence, is not present beyond the limits of the Body, whether externally extended as It is in heaven, or in the Blessed Sacrament.

Why would parish priests not say the High Mass or Missa Cantata, Father? It would seem logical that they say the main mass and the curates assist them as deacon/ sub-deacon & say the low masses?

James,
You may be right. In most Brighton parishes the Parish Priest sang HM at Christmas and Easter, then seemed to spend most of Sunday morning taking Holy Communion to the sick.
Why? Maybe bad knees?

I will take 1,000 Low Masses at 5:30 a.m. over the awful Spanish/English/pop music Easter Vigil Mass I suffered through this year.

I love the sentiment of High Mass but I agree with Ma Tucker that Low Mass is like a balm for the senses.
Fr Ray: "Bad knees". I think gentle sarcasm is a greatly under estimated asset to parish priests, although you have just made me splutter my Earl Grey yet again!