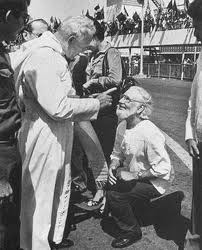 This for me is one of the images of John Paul II that marked a change in the life of the Church the end of much muddle and confusion.

The other image is this one: 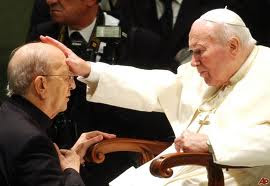 The beatification of Pope John Paul II reminds me of what it is to be Catholic, it is to think with the Church. For many John Paul is undoubtably "the Great", for others there might be nuanced thoughts but for all Catholics, today he is "Blessed John Paul".
Now, we are called to accept without question his Blessedness. God worked in an outstanding way through him. I could have put up other images, the vast crowds that flocked to be in his presence, the fall of oppressive regimes at his words, the inspiration he gave the young, his oustanding defence of Life, his heroic struggle with his own sickness.
As with St Peter himself there is ambiguity, but that only serves to make us thank God for his Grace which works on flawed human nature. God loves human beings not plaster statues.
at May 01, 2011

Sorry Shane, I think we now have to see the good even if we accept there are problems.

The Council of Trent said (I quote from memory): "It is good and useful to venerate the saints." You might never utter a single Ave Maria and still be a good catholic. While we are not obliged to venerate any saint or keep a special devotion for them, we are very much obliged to accept the Church's verdict about the blessedness or sainthood of Her children.

Of course you can also get well after a serious illness without taking your medicine. But if it is there and it is known to help, it would be foolishness rather than sin not to take it.

Father, if there had been cameras at the time we might have a picture of Judas receiving communion from Jesus' own hand at the Last Supper. Even so, Our Lord had the gift of "knowing what was in men's hearts". But that gift is not necessarily given to others, even the saints.

It is difficult for anyone under the age of 50 (I am mid 40's) to appreciate the disastrous state the Church was in in 1978. There is no way that JPII could have turned things round fully in one pontificate. However we are now witnessing some of the friuts of his efforts. Such as a correct translation of Holy Mass that we shall, God willing, have from September.


I have a feeling tambourines and anything else 1970s is going to seem very out of place with the new translation and many will be troubled by the inclusion after 40 years of all those censored phrases of supplication to God, phrases making us aware of our sinfulness and inadequacy before God and making us aware that the Mass is a sacrifice.

JPII reformed Icel and set the translation reform in motion.

Sorry Father, but for us ignoramuses, who are those people he is with in the pictures?

His heroic virtue was evident from his days fighting the Nazis to his stand off with the might of the Kremlin (over 30 years). Don't forget what happened to other priests like Fr Popieluszco. And having suffered in the War, he was still generous enough to appoint a German to be his right hand man (luckily). He then bore his illnesses patiently and uncomplainingly, although had every excuse to resign - he kept going - reduced from an active healthy man to a painridden invalid.
If some within the Vatican took advantage of his trust to hide what was going on, then their responsibility is a terrible one.

Our Lord had the gift of "knowing what was in men's hearts". But that gift is not necessarily given to others, even the saints.

Sadly, in the case of Fr Maciel as in the case of Cardinal Groer, Bl. John Paul had been given ample evidence of what was in the heart. He appears to not to have believed it or wanted to pursue the matter further.

I think we have to accept that Bl. John Paul was beatified for his personal holiness, not for the brilliance of his governance of the Church. If anyone finds that distinction offensive, they should look up St Celestine V.

Let us not forget that David, now revered as forebear of the Messiah, as a prophet and as author of the Psalms, was also an adulterer who contrived to have his lover's husband killed.

What are the pictures from?

I have two questions:

What is the story behind the second image?

In my copy of Butler's lives of the saints it cheerfully states that St Veronica probably didn't exist. Are you sure that beatifications and canonisations are infallible? (I have heard that the latter is infallible but the former is not.) When the Church declared that She cannot err in making those pronouncements was the declaration infallible? That sounds facetious but there seems to be so much disagreement about what is certain in the Faith that I am genuinely confused.

Father,
I was at the beatification this weekend, and the cultus of Blessed John Paul was absolutely incredible. The love for him and devotion to him shown from everyone from the Holy Father to the little Polish nun who elbowed me in the ribs to get a yard further down via della conciliazone made me discard my doubts. He is truly among the number of the Blessed. Thankfully we do not have to regard every decision he made as fantastic, just note that he lived a life of exemplary holiness. Those who rightly worry about his mistakes in re Fr Maciel etc. should perhaps just focus on his beautiful and inspiring devotion to Our Lady,for example. The endless complaining does no one any good....

Sorry the first picture is the Pope reprimanding a dissident priest, who was also a politician, the second is him with Maciel.

The dissident priest was, if I remember correctly, Ernesto Cardenal SJ then a minister in the Sandinista government of Nicaragua.

The endless complaining does no one any good....

Nor does the endless sycophantic praising in some quarters of the church.

I'm surprised that you didn't mention the images of the Pope kissing the Koran?

Hestor,
I suspect JPII kissed anything that was given him: babies, tarmac etc...
I blame his MC.

Can I ask a (simple?)question concerning the beatification ?
I watched on three different channels and had a choice of a voice-over in French, German or Polish.The mass was in Latin - the faithful in the square seemed to be following, but how are they supposed to be involved when back home they have mass in French, German or Polish? Shouldn't there be more opportunities to tune up to the cadences of Latin?