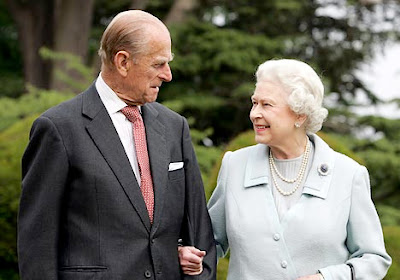 I am not a republican!

There are a lot of problems with monarchy. It is suggested it perpetuates a class system and privilege. I am not sure that is really so or if the monarchy was absent there would be less of a class system or less privilege? Members of the "best" families seem to dominate the Ivy League University of the US, the prefix du still carries a certain cache in France. Italian aristocrats are still given a certain precedence, even today's Labour Party seems to be dominated by a certain privileged class.

One of the things about the English monarchy is that it emulates ordinariness: the tupperware of the royal breakfast table, the prosaic conversation, "You arrived in quite a small car", as the Queen said to the Pope, the obvious but rather restrained affection between the Queen and the Duke. Now, even the annus horribilis of fires and royal marriage break-ups and other disasters marks a time of transition from being a rather special family to being rather like any other family in country with its wounds and bruises.

The difference between monarchy and presidency is that the monarch is there for the duration, until death. Selection by birth in many ways is a lottery, we don't choose our monarch and they don't choose monarchy, they are simply born to it, like Edward VIII they can opt or be opted out but being monarch is about duty, not choice.

In many ways as George VI's speech impediment showed it is not even about natural ability or gifts, again is about duty, even in that very English way "of just muddling through". For the nation too there is something important about knowing that for good or ill the monarch is there until death, the acceptance of having someone in charge who may not be that gifted or even necessarily that bright is an important part of Englishness.

For Americans having a flag as a national icon or a constitution is fine but we English have monarch with a family with all its quirkiness, and during our history, often folly. There is something very incarnational about it all, it can be described as feudal but better, about a relationship of a nation with a person or a family. Flags and legal documents are static, one might venerate them but what seems to have happened over the last reign is some sort of dialogue has taken place, the people speak, the monarch adapts but that has taken place throughout our history. For a monarch who doesn't listen the sword in some form hovers.

The great state occasions are vulgar, my objections to the wedding were more to the gushing presentation by the media but as someone commented, "vulgarity is part of royalty", so too is the duty of fulfilling expectations. The marriage itself is good, obviously, behind the carriages, jewels, hats and uniforms are aching bunions, boredom or just a desire for cigarette or to burst out laughing; something very human, something very incarnational.

Whether the Cambridges would have preferred a quiet wedding or not is not up to them they had a duty which they fulfilled, somehow for them they have to bear the Cross of Royalty until death, doing not what they want but what they should do.

It's arguable that Britain already IS a republic implicitly since the Glorious Revolution. In 18th century France the great liberal philosophes were notorious for their cultural cringe towards liberal Enlightenment England. French orthodox clergy also condemned Gallician and Jansenist clergy for their 'anglomania'. Montesquieu and Voltaire were rabid anglophiles who wrote books extolling Britain and its Constitution and became Freemasons in London. In many ways the French Revolution was just an attempt to transplant the British constitution onto France.

An advantage of monarchy is that the nation's unqualified affections and loyalty can be given to a King who stands above politics in an hereditary office, while the politicians we elect can take all the criticism and contempt we can throw at them.

I am not a republican!

Just a small point of correction. There is no such thing as the English monarchy and there hasn’t been since 1707. On the day that the Treaty of Union took effect England ceased to be an independent state and became just a part of the United Kingdom. The last English monarch was Queen Anne. All monarchs since then have been British. Anytime you English want to reclaim your independence and become a separate state just let us know. One thing that I don’t understand about the English is that although they like to pretend that England still exists as a separate state and has its own monarchy they are not very keen on breaking up the United Kingdom. Correct me if I’m wrong on that but that’s the way it appears.

I hope I didn't upset you father. I just sensed an apparent "hermeneutic" of republican sentiment in the previous posts and the comments that followed. Possibly becuase the viewpoint offered more usually (seems to me) to come from those who are republican (in the English sense)

- I do think that the service yesterday was sublime and solemn and it is on such occasions that it seems especially sad that the C of E is no longer part of the Church, the pain of separation is apparent - and you can only feel sadness that their devout members are consequently deprived of some of the sacraments (as, in most cases, through no fault of their own, they have been taught that they are ficticious).

Father Ray, I like, in parts, your latest post on Duty and monarchy. There are other parts with which I would totally disagree. Republicanism would make you a British, or English citizen. At present you are merely a British or English subject".

I like the notion of duty and service, but one may have that in an elected President! Especially if he has powers, such as in Ireland, to refer laws to the Supreme Court to test their constitutionality before signing them into law at the behest party politicians.

Republicanism does make for equality of all before the law. I am not suggesting that equality is a virtue! I doubt that one could argue for equality before the law exists in England. Far too many have provisos requiring permission of Attorney General or Crown Prosecution Service before seeking redress.
I remember a case recently which failed because the Queen might have been called to give evidence.

So, "behind the carriages, jewels, hats and uniforms are aching bunions, boredom or just a desire for cigarette or to burst out laughing; something very human, something very incarnational."
I totally agree with your sentiments here Father Ray. Those born into Royalty, anywhere, can either respond to a life of "duty" and accepts it's trappings; which often actually are just that; or they can rebel and decline the silver spoon and the large crystal fishbowl and be viewed as deserters. The situation for the Kate / Catherine Middletons of this world is somewhat different: little girls sometimes want to be princesses and sometimes Mummy and Daddy want that for them too. Sometimes the dream sours after the honeymoon, just as it does for parlour maids.
I thought your wedding post was too harsh and rather ranty; middle-aged at 28?? Wills can't help thinning on top; although Harry certainly could do something with that barnet, and I have no idea why he was dressed as the Governor General of Ruritania. The trees were dreadful. Kate / Catherine looked beautiful and her dress was perfectly modest and elegant. The couple looked shyly happy with one another exchanging their vows. Nothing, absolutley nothing, can be done about the Duke of Edinburgh now. All much of a muchness for a Royal Wedding.
I am neither a republican nor a monarchist. I don't really trouble with the Royal Family unless they trouble me. I fear they may trouble me with a hefty security tab for this non public funded occasion. I endorse the points raised by both Mike and EFpastor emeritus; and I object strongly that the monarch can decline to give evidence under oath.
At the end of the day, the Queen, God bless 'er, sets a fine example...of being a queen. We all have a duty to ourselves, to others and to God. Many of us "serve" in many different ways, whether that be to our families, in public srvice, through Holy Orders etc. I hope the Cambridges are in love and will be faithful and kind to each other. I pray they will stay together. But I still don't understand why those sentiments need to be conveyed by the Red Arrows.

An important aspect of our monarchy is the sacramental consecration of the king or queen at his/her coronation, with holy oil and participation in the Eucharist. This must never be set aside in favour of some milk & water multi- (or non-) faith initiation ceremony.

England was a republic for a while. It didn't work.

The first requirement for any head of state is that they have never wanted the job. Which a monarchy pretty well guarantees.

With all due respect Britain hasn't actually tried the Republican experiement properly.

we traded one obnoxious tyrant (charles 1) for another (cromwell) who wanted to be king and intimidated parliment into apointing him Lord Protector (king in all but name).

But if the winsors don't mind taking a break from ruling for 10 years we can actually try it properly.

But one thing was embarrassing, watching the wedding with friends. After the wedding, as the couple passed through the screen from the choir into the nave, there seemed to be two cardinals at the front row of the nave who - alone of all the congregation - started clapping.

Is it really so long since some of our senior bishops attended a dignified church service, that they have forgotten how to behave?

To paraphrase John Adams: I have no King but Christ and no Queen but Mary.

The alternative might be President Blair, Brown, Kinnock,Mandelson,Patten,Beckham, etc.

The Church of England never was part of the Church IN England.