That "work of art" 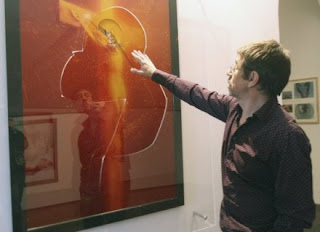 That "work of art" is certainly blasphemous, attempts to destroy it, to publicise it are exactly what its creator wants. It is all rather puerile, a not very significant "artist" wanting to offend a handful of Christians, a rather silly gallery curator putting the wretched thing on display - it is about publicity seeking - giving the thing publicity, taking it seriously, is playing their game. Better to campaign for the sacking of the curator for wasting public money. The "art" here is not the object itself, a crucifix in a yellowish haze, it is not actually unattractive, it is offensive only when we are told it is a crucifix in urine. It is the reaction the creator is interested in that is the "art".

I am offended by it but on Good Friday the Passion of Christ tends to put things in context, this particular object is just another reminder of Jesus, and his followers, being loaded with contempt, there are worst acts of blasphemy. Abortion is worst. Child abuse is worst. War is worst. Torture is worst. Treating the young, the elderly with contempt is worse.

The pit of hell has it's levels, so we are taught. Perhaps this painting will be in the entrance lobby of the latter, to greet those arriving there, as they wait to be dispatched to their allotted 'rooms'. No checking out allowed.

Golly, I was a bit snarky there, but it is Good Friday and I am not in the mood to hear my Saviour mocked today!
There, but for the Grace of God go I and perhaps also but for, what St Teresa of Avila described as natural goodness, neither of which, are to be boasted of, by the self, ofcourse. I've seen some pretty murky things inside myself when Christ's merciful light of clarity has shone within my own being.

'Father forgive them, they know not what they do'

I agree with you, Father, almost entirely, but have a reservation over the use of torture, which I would endorse in certain circumstances.

Does anyone remember the 'moors murderers', Brady and Hindley, who witheld the location of the graves of the children they had killed? Torture would have quickly produced the information, and the children could have had a Christian burial.

I know the Church's (current) teaching on this subject, and hope it doesn't make me a heretic.

Is he a piss artist?

So, you can't see any merit in the piece (twenty years old now) as a comment on the commodification of religious iconography? Iconoclastic, yes; blasphemous, even. But in its own way curiously devout.

I think Walker has the right idea. It's just a pathetic joke. Not worth agonising over.

Just got back from a nice Good Friday service with meditations on different paintings.
One was The Descent from the Cross. Rembrandt Workshop c. 1650, probably Constantijn van Renesse.
The light is amazing. The speaker pointed out the inner, radiating light illuminating Christ and in the far right corner Our Lady. Everything else including the Cross is hardly visible.
Now that's what I call a painting!

I would echo Shadowlands and also agree it is a silly curator at the heart of this awful blasphemy.

I completely agree, Father. The "art" here seems to be less the object itself - which as you say, isn't entirely unattractive -, but actually the context: the offence of knowing that it is a Crucifix "submerged in urine."

I suppose if something offends public morality there are legitimate grounds to consider that thing's removal, and in this case it might be more appropriate to campaign for the removal of the "artwork." Attempts to destroy it might actually be counterproductive, increasing its popularity and "fame" and might even "fan the flames" of the scandal created.

Worse, the silly man who created it might actually make more money out of all the fuss and commotion (!)

To anyone who says corporal punishment is wrong: it is better to suffer in this life, than in the next.

Beauty is in the eye of the beholder-

"Sister Wendy Beckett, an art critic and Catholic nun, stated in a television interview with Bill Moyers that she regarded the work as not blasphemous but a statement on "what we have done to Christ": that is, the way contemporary society has come to regard Christ and the values he represents."

I respect Sister Wendy and her opinions.
Can we talk about some nice for a change like the love of God.

Isn't it interesting how the leftist creeps pat themselves on the backs for 'bold' statements? Not one of them would have the guts to make a 'bold' statement such as putting a 'rainbow flag' or red AIDS ribbon in a vat of urine.

There are two appropriate responses: ignore them or laugh at them.

Laughing at them is by far the most effective as they take themselves sooooooooo seriously.

I really love the way Sister Wendy Beckett has turned this round on the originator!
Definition of art: the expression or application of human creative skill and imagination, typically in a visual form such as painting or sculpture, producing works to be appreciated primarily for their beauty or emotional power.
Personally, I see no beauty here; I realise esentially it is in the eye of the beholder. Emotional power? Well, it is certainly emotive enough to elicit indignant public responses, including this blog. I suppose it becomes art if we afford it that power and interest. I'm choosing to adopt the same view as I do when I walk past someone weeing indiscriminately in Trafalgar Street: move along everyone, there's nothing here to see.