Reigning but not ruling 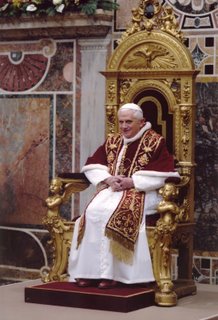 The reign of Pope Benedict doesn't fill everyone with joy, acquaintances working in Rome in the offices of the Curia often rage about him for a variety of different reasons: Cardinals who have been promoted above their competence,  ignoring particular offices and doing things motu proprio, under his own initiative, or simply not reading documents they have prepared with a great deal of effort, expertise and diligence. The younger ones, complain that the Spirit of Vatican IIers are still in place and now hold many senior positions, not by merit but by virtue of their age. Some suggest he reigns but he does not rule.

Pope Benedict seems to consider life too short to become overly involved with reforming the Curia, it is a labour of Hercules for a younger more beaurocratic Pope. Any real reform is about changing attitudes. Promotion in the Curia depends on seniority, and for the most part Curial recruitment is a self selecting Magic Circle, changing its direction would involve either brutal sackings or detailed micromanagement, neither are Benedict's style. It is probably accurate to portray John Paul I's death as being caused, in part, by a slew of paperwork from the Curia. Benedict avoids it, leaving it to be dealt with by rather kindly, if not too effective Cardinal Prefects, who some suggest are chosen more for their past connection to the Pope than their effectiveness.

Occasionally, often perhaps, the Pope does intervene, nuncios complain their ternae are rejected, being returned from the Papal Apartment marked "none of the above", although they are left to make their suggestions the Pope appoints those he has learnt to trust or to veto others. The Secretariate of State for the most part seems to do its own thing working diplomatically with other states but hardly putting forward a coherent ecclessiology.
Amongst the Cardinals there is criticism, Cardinal Zen attacked vehemently the Ostpolitik of Cardinal Casaroli in the person of Father Jeroom Heyndrickx, which was pretty obviously a criticism Secretariate of State. It is perhaps more significant than the spat between Cardinals Schönborn and Sodano, the retired Secretary of State.

Edward Pentin interviews Massimo Franco about his new book "Once the there was a Vatican", which goes further into these divisions.

Benedict XVI will always be a Pope of divisions, for many he is still an object of hate, "dragging the Church backwards" away from the rupture of the "Spirit of Vatican II" or the "betrayer", the one who refuses to refute the legacy of the Vatican II etc.

In order to understand Benedict XVI, I think it is important to understand that he is a man of thought and ideas, who understands the power of history. The Curia will continue doing its day to day work today and tomorrow but the future belongs to the intellectual concepts he scatters on the changing tide of history.

Remember his real ambition was to retire and write, not to become Pope.
at April 12, 2011

I thank God daily that he did not follow his ambition and retire, but listened to Gods call upon his life and ministry.
As an Anglican waiting to join the Ordinariate you will understand why!
His visit to England has done much to further enhance healing amongst Christians. I believe his work will be talked and written about for years to come.The Vatican will carry on ever changing and ever complaining, whoever sits on the Chair of Peter - but that's the way of things in any organisation.

While some people view the Pope as an absolute ruler with unlimited power, Pope Benedict hardly sees himself in that role. After decades in the Vatican he well knows how things work there. Conscious of his age and the limited time available to him, he doesn’t seek to be a revolutionary introducing radical change. I suspect he is conscious of the evangelical admonition: “One man sows, another reaps” and his goal is to plant the seeds which will flourish after he is gone.

Like Moses, he may see his role as holding the Church together in difficult times, knowing that he himself will not get to “see the Promised Land” but conscious of his role in facilitating the path towards it. Others may see him as a caretaker Pope and are impatiently waiting for the day when someone else - younger and more ‘with-it’ - can get us back to more ‘progressivism’. I suspect they may be in for a disappointment.

But as the Holy Father has repeated frequently: “It is His Church, not ours” and the predictions of its imminent demise are - as always - premature.

I do hope Pope Benedict will not be remembered as a 'Pope of divisions.' Didn't Fr Z call him the Pope of Christian Unity?

However only yesterday I was reminded of the divisions which have arisen among the laity whenever I broach the subject of the two forms of the Mass with Catholic friends. We do seem to be becoming polarised.

Someone I have known for many years of a similar age to myself mentioned the new translation soon to be in force and said strongly 'I hope it doesn't mean we are going backwards. And we don't want to see the Priest with his back to us again either.' She continued quite angrily and added 'We are all familiar with the translation we have got and if it changes I shall leave the Church and go to a C of E one.' She is the Catholic representative in her parish meeting up with other faiths too and is convinced that there will one day be women priests and is all in favour. She is also in favour of politically correct inclusive language objecting strongly to everyone being referred as 'man'. It never worried me as I regard myself as belonging to 'mankind' but there do seem to be women who do object to this which is another division between us.

We have been sent a wise Pope and we can only pray that he may continue to guide us all for many years to come.

Please tell me it is precis of something off the Web?
As a linguist I find it shows a deviation from your normal use of language.
If these student observers looking at clerical blogs see this I fear it is not representative of your usual standard.
The infighting and paranoia amongst Catholics seem a type of hellish alienation your last post described so well.
Regards

Margaret,
I do not think this something which has developed in the last five years. It was there under JPII & PVI JXXIII too.
It needs reform but the problem is, how?
BXVI would see the solution, I suspect, as conversion through catechesis and preaching.
I am sure he would like too see a smaller Vatican but then there has to be agreement by local Churches as to what is a Catholic.

I also thank God that the Ven. John Paul 2nd refused Cdl Ratzinger's resignation. Am I alone in noticing that the Pope started his reign looking older and haggard, but gradually has grown younger looking and more serene?

Welcome, Fr Ian, by the way.

Pelerin said:
I do hope Pope Benedict will not be remembered as a 'Pope of divisions.' Didn't Fr Z call him the Pope of Christian Unity?
For anybody who has not yet seen them, Fr Aidan Nichols has some very interesting things to say about that very idea:
http://ordinariateportal.wordpress.com/2011/04/10/aidan-nichols-the-ordinariates-the-pope-and-the-liturgy-part-ii/

There are some - e.g. Father Gruner, Father Malachi Martin (RIP), Abp. Lefebvre (RIP) and the Abbe de Nantes (RIP) - who believe that the Vatican is under the occupation of Freemasonry, and has been since the 1960s, and that there are 4 active lodges embedded therein. If this is true, then the perennial paralysis of modern Papacies should be traced to that first, rather than to Curial personalities. Moreover, if this is true, it could be said that the "progressive" mindset - otherwise known as the "Spirit of VII" - creates a good sheep's cover for these wolves.

I doubt if any feminist has ever objected to the phrase 'the sins of men' which is mentioned a number of times in the liturgy.

Actually the word 'man' is gender neutral isnt it? The sexes used to be distinguished by werman and wifman

DILLY, I think you are quite right!
He seems to look serene, inspite of the aweful burden that has been placed on his shoulders.