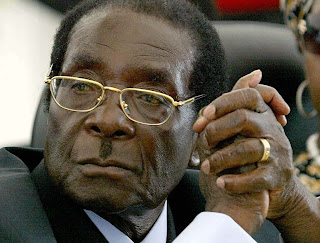 To every one's embarrassment the President of Zimbabwe, Robert Mugabe is going to attend Pope John Paul's Beatification. Mugabe is the subject of an EU-wide travel ban, according to the Independant, "the Vatican had to obtain special permission for him to be allowed to enter the pocket statelet." I am not sure that that is quite so.

The Holy See still talks to the Mugabe regime and rather than issuing specific invitations there is general invitation to all world leaders, or their representatives, to attend such events. Mugabe has decided to go himself.

Apparently, from whichever Italian airport he arrives at he is under Vatican protection from there until enters the City State and so is immune from arrest by the Italian state in the same way he would be if he arrived in New York to attend a UN meeting.

I am pretty certain I know what John Paul would have said to the President, Pope Benedict is less outspoken.
at April 30, 2011

At least the Vatican will not be dictated to by rabble rousing,corrupt media.

Mr Mugabe is a democratically elected leader of a former colony of an Imperialist Power.

The paternalistic former power can't get over the fact that they were hated.

The former power still holds all the purse-strings which accounts for the hardships they are still suffering from.

Unless he is excommunicated he has every right to attend.
Unlike the Wedding the Holy See can't exclude just because someone doesn't like someone elses politics.

He's an old rogue isn't he.

Do you remember at John Paul II's funeral Mass he positioned himself near Prince Charles so at the 'peace be with you' handshake, he got himself a photo-opportunity.

Trouble is, with his record, it's beyond a joke..

I am surprised that the Holy See have forgiven him for his governments vicious attack on Archbishop Pius Ncube. Mugabe is no friend of the Church. His only desire is to be seen on the world stage - and this is one occsion when he can be seen without fear of arrest for crimes against humanity.

Mr. Mugabe did not win the 2008 presidential election. In spite of rampant voter intimidation by his thugs Mugabe lost but simply refused to leave. Eventually, an arrangement was made to share power with his opponents.

His policies have reduced to abject misery a country which was once agriculturally bountiful.

Diplomatically, his attendance at the beatification ceremony cannot be avoided, but his will be a most unwelcome presence.

Mr Mugabe: "I am very proud to be the conqueror of the British Empire, and I am willing to be King of Scotland if the Scottish people want me. Excuse me while I award myself an enormous medal."

Thankyou for that reminder Parepidemos.But I still think that Mr Mugabe would have to go some to top that other Bundle-of-Charm Cecil Rhodes.

He STOLE the country in the first place and destroyed millions of lives in the process of turning it into paradise for the colonists.

I find it somewhat unbelievable that this decision is being defended here. It is, in both senses of the term, scandalous. Most certainly it brings scandal to the Faithful. To legitimise the monstrous brutality of Mugabe and his regime in this way is totally reprehensible.

Why the man is still in good standing with the Church given the appalling things he is responsible for, I have no idea, and that the Vatican would effectively protect this man from arrest while he is in Europe is tantamount to condoning evil.

Pachomius,
I am not defending his attendance!
However he is the de facto leader of Zimbabwe.

De facto leader indeed. Essentially, he was not re-elected and so he just refused to relinquish power. He clearly sees himself as A Leader and an international Very Important Person. He likes to press the flesh with the great and the good and that includes the Church. Of course this is another photo opportunity for him on the world stage.
I would never condone the history of the former imperialist governors. But that history does not negate this man's actions, which he is responsible for today and which will continue tomorrow. I appreciate he has not been excommunicated. I am not going to drone out comparisons with Hussein and Gaddafi. I understand the Holy See cannot exclude or bar on political grounds: personally, as a Catholic, I do not view heinous crimes against humanity as merely political.