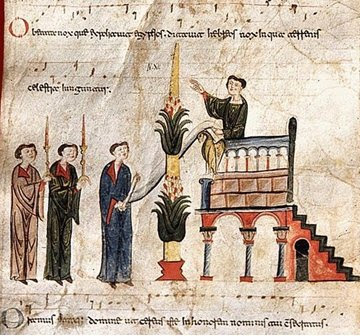 J'Accuse...
...myself of having publicly contradicted a rubric, deliberately and with forethought and ordered others to obey me in this act of disobedience. The parish Master of Ceremonies, Andrew had indeed pointed out the incorrectness, indeed the wrongness of my action but I overruled him and I am afraid I am very likely to do it next year. 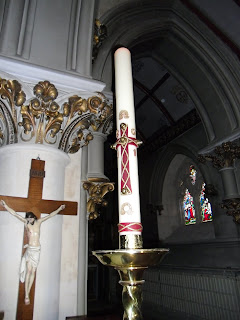 This as far as I know, and hope, is the only piece of liturgical law which was deliberately broken during the Sacred Triduum at St Mary Magdalen, Brighton, another was broken too but that was slightly different, see below.
The rubric of the Easter Vigil calls quite clearly for the "lamps" of the church to be "lit" immediately after the third "Lumen Christi". It is quite clearly lamps and not candles. I gave instructions that they were to be kept unlit until the fanfare of the Gloria!
Thus, the Old Testament readings were read in the light of the Paschal Candle, whilst the faithful reflected on them holding there own candles. Because of the size of our sanctuary we chose the second option for its placement, by the ambo, rather than the first option, in the centre of the sanctuary.
In St Peter's the rubric was followed strictly, but not here, obviously at a Papal celebration there are security considerations. I must admit I don't understand quite why lights are turned on at this point, especially as the Exultet sings of the light of the Paschal Candle, and the lights of the people, "a flame divided but undimmed". When the lights are on that symbol is diminished.

Apart from that I was incredibly moved by our "very correct" Triduum. We celebrated ad orientem throughout, it just seemed more appropriate, and it is of course a valid option as the CDW have continually pointed out.

For the first time our choir was up to singing the proper chant, the sound of the Church which was quite beautiful. I was struck on Good Friday, which was sung by women alone, a couple of wonderful women came down from Spanish Place to help us out until then I hadn't realised how glorious and triumphant the sound of the Church is on Good Friday. For the first time we sang the Passion in English, thanks to the great kindness of the music librarian of Birmingham Oratory who sent us the score. Next year maybe it might be augmented by the Victoria crowd, the chant is so incredibly beautiful.

For the Vigil we followed the option and only had five readings, with the proper Gradual, which was amazingly prayerful, next year we will have all seven. Here again I broke the Law, though I observe many of our Bishops did the same, we began the Vigil before the sun had left the sky, again Andrew, our MC, had pointed out darkness and therefore the First Day, the Lord's Day would not have begun until at least half an later, hence we began before the Sabbath had ended but this was more my laziness and concern that people would not come if it was later, than deliberate flouting of the Church's Law.

Actually, it would be even more logical to revert to the Pre-Pius-XII practise of starting the Exultet only with the light of three small tapers, to put the incense into the candle when the Offering of Incense is mentioned in the Exultet, to light the candle only when the candle is praised in the same text, and to light other candles only when the Exultet speaks of the distribution of light that does not diminish its brightness. One would hope that future reforms would go back to something like this, otherwise the second half of the Exultet can seem a bit pointless.

By the way, I never encountered the electric lamps being lit at the third Lumen Christi. In some places they are lit after the Exultet and in others, more sensibly, during the Gloria

Overruling the MC (Master of Ceremonies) when he is correct is a dangerous business, Father, and more than one MC I know would not have stood for it. As the 'Bible' of Fortescue points out - "It is his business [the MC] to see that the ceremony is carried out correctly by all [ALL] who take part in it."

If the MC is correct in his application of the rubrics and the priest decides otherwise then the MC is undermined in the eyes of all the other servers. In effect, he is no longer the Master of Ceremonies but simply the senior server who is there to obey the particular whim of the celebrant.

A recipe for trouble, Father Ray, if I may say so.

Pedant, Quite right! Hence I confess my fault publicly.
Having such an excellent Master of the Ceremonies means that I can do my proper job and pray the Sacred Liturgy rather merely "perform" it.

Surely onfessing your fault publicly should be accompanied by purpose of amendment? and that clearly is not going to happen next year, you state place,

I agree that the rubric seems out of place but imagine how things would be if everyone changed liturgy to what they consider it should be! It does happen, of course, as we all know and we lament it when it does.
Joyous Eastertide, Father Ray.

Because we are so far north, because Easter is so late this year, and because the sky was so clear on Saturday it was well after 9pm before it got properly dark. Our Vigil began at 8pm when it was still broad daylight. A great pity, I thought.

Not doing as your particular MC says is risky Father... I have seen him call Bishops to order.
However I am inclined to your view about switching on the lighting in church later rather than earlier during the Vigil. I was serving selsewhere ythis year, but the usual Oxford Oratory practice, as in a more modest way at the church I served this year is to have the prophetic/typological readings by the light of the Pascal Candle and people's tapers, and then to switch on the lights together with a fanfare - always makes the hairs on the back of my neck at least tingle.

I never thought I would see you admit to contradicting a rubric, Father!

However I was glad you did start the celebrations on Holy Saturday evening when you did - any later and I and others would have missed the last bus home and Brighton at night is no place for senior citizens!

With sincere thanks for such a beautiful Sacred Triduum.

Clever Boy,
Yes, I want an MC capable of making my celebration of the Mass, not mine but the Church's.

However I suppose that the difference between Roman Law and English Law, is that R Law supposes a wise and benign lawgiver, also I think we could argue "custom"; in many places it has become the custom to light the lamps at the Gloria, so I don't think it is an indefensible aberration.

At my parish we were told to blow out our candles after "lumen christi", but they did not light the 'lamps' (other than a spot-light focused on the lectern) until after the readings.

This left the church in almost total darkness - certainly too dark to read - throughout all that time.

I was surprised how much difference it made, having to concentrate on listening to the readings rather than reading along. Back to older, aural disciplines that we have lost.

Also listening to the Exultet in Latin, without being able to read the translation, gave a completely different (and valuable) experience.

If I may say so, the Case for the Prosecution is "not proven". Your MC is right to point out that the rubrics say that the lights should be put on at the third Lumen Christi, but they also say (nn 3) that that the Vigil by its very nature "ought to take place at night", and I think there is at least a prima facie case for saying that the practice which you (and we here at the Birmingham Oratory) followed is more in accordance with the spirit of the law, even if it can be argued that it doesn't strictly comply with the letter. At any rate, our MC was quite happy with doing it this way and I have to say that the unveiling of the statues and the switching on of the lights whilst the choir were singing the Gloria was one of the highlights of the Triduum as far as I was concerned.

My arguement too Richard, I presume the writer of the rubric imagined "lamps" as being a few dim oil lamps just breaking the gloom, not electric light that is brighter than daylight.

Our website has some Videos of the Easter Vigil in 2008 so that you can see the sort of effect I’m talking about. Much better than putting the lights on before the readings start!

Fr Ray mentions having 'broken the law' by celebrating the Easter Vigil at 8.30 pm before it was dark.

I have just read a post in another blog written by a Priest in which he also admits to starting the Vigil early - at 8pm. He mentions one of his parishioners who told him that he had attended the Vigil in another parish and it had started at mid-day. The Priest asked what about saying 'This is the night' of the Exultet? Apparently this was changed to 'This is the day!'

I wonder what the record is for an early Vigil. Any advance on mid-day?

I'm sure your vigil was beautiful. I used to keep the lights off until after the Exultet.

The Vatican Easter Vigil was not a model of rubrical correctness. The catechumens (or elect) made their renunciation of Satan and their baptismal promises at the same time as the whole congregation renewed theirs. And the Pope's baptism appeared doubtful. By the time the shell reached the candidates most of the water had been spilt, only one pouring was administered rather than three, and so little water actually ended up on the candidates that they needed no towel to dry themselves.

No, the Vatican does not always do things well.