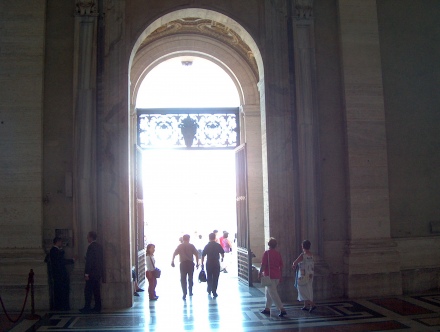 Fr Hunwicke presents a difficulty with the Office of Readings, which struck me this morning Origen very eloquently sees the High Priestly action of Aaron going into the Tent of Meeting and sprinkling the East of the Mercy Seat on Ark of the Covenant as being a prophetic gesture, because "Your propitiation came from the east. From there came the man whose name is the Dawn, who became the mediator between God and Man." The Leviticus reading on which Origen comments in both the Neo Vulgate, Latin translation and the English version merely says, "the front of the Mercy Seat". Obviously this is a case of modernised liturgy influencing the translation of the sacred text.

The image that Origen presents is incredibly rich; the Mercy Seat, Aaron and the East are all images of Christ, as is the sin offering. The East especially symbolising the Risen Christ, who come to judge from the East. There is a richness in Origen's translation, his offering of a sacrifice in the presence of, and on behalf of Israel. In New Testament terms one can even see a sense of those standing behind Aaron as a Holy Nation, a Royal Priesthood, it just evaporates when "front" replaces "east", as does the relationship of the ministerial Priesthood to the Priesthood "of Believers" in the current normal liturgical practice.

Yesterday's Gospel might have needed less explanation if we all turned to the Light to pray, the East is the great primal-icon of Christ. I love the idea of the faithful turning to the great block of light that would have almost blinded them streaming through eastward facing door of St Peter's.

I have always celebrated Good Friday facing East, now my servers are pressing me to celebrate the rest of the Triduum that way too, maybe I shouldn't have got them to read Spirit of the Liturgy.
at April 04, 2011

Dear Father,
Do take the trouble to celebrate ad orientem for the Triduum. I have celebrated all Masses ad orientem for the last five years, with a sprinkling of Latin for the Sanctus, Pater Noster and Agnus Dei at the Sunday Vigil, often with the Greek Kyrie thrown in for good measure. Although it feels like a hybrid Mass to me (some kneel to receive on the tongue here; others kneel and receive on the hand; some stand and receive on the tongue; others stand and receive in the hand) people do get used to it, and many like it. Only a few hard-liners think we are going back on Vatican II despite all the handouts and Bulletin readings they have had. Still, the trouible is worthwhile. I do wish the Holy Father would stipulate that in all Masses the Ordinary be in Latin -and restore at least the Placeat Tibi beofre the final blessing.

Nice post, Father. It's going to take time for us to come to the realization of how pervasive this theme is in the tradition, but it's good to see it happening slowly. Hopefully this will come about with a new translation of the Breviary.

Yes, I too have celebrated ad orientem (liturgically, that is: it is really geographical south-south-east) for several years, after catechesis, etc. Many kneel for Communion; many receive on the tongue. We use Latin for Asperges, Sanctus, etc. at the principal Mass. But when I go away, the supply priest is unable to do it, so every summer it reverts. So few priests know the conventions, even though the rubrics seem to be actually drafted for it, for instance, by repeatedly telling the celebrant to face the people. I think I noticed one extra instance of this in the 2002 Missal, but could not find it quickly for this comment.

Yes, dear Fathers, there is nothing illegal to start fertilizing the OF as it is now usually celebrated, whith various elements of the EF. I have never read details of the prescribed ritual, but when all sorts of abuses are tolerated, why the "abuse" with the TLM fertilizers should be so awful, although the rubrics are so ambiguous that nothing is unlawful.

As I pointed out on Fr Hunwicke's blog, since the Temple faced east, and the high priest entered the Holy of holies from that direction, the east of the ark/altar was the front to him, and to sprinkle it he must have been facing west. I do not see that this has any bearing on the question whether today the priest should stand on the (liturgical, though not necessarily actual) east, facing west, or on the west facing east.

"I do not see that this has any bearing on the question whether today the priest should stand on the (liturgical, though not necessarily actual) east, facing west, or on the west facing east."

See Ezekiel 43:1-4
Afterward he brought me to the gate, the gate facing east. And behold, the glory of the God of Israel came from the east; and the sound of his coming was like the sound of many waters; and the earth shone with his glory. And the vision I saw was like the vision which I had seen when he came to destroy the city, and like the vision which I had seen by the river Chebar; and I fell upon my face. As the glory of the LORD entered the temple by the gate facing east...

True, but the original post concerned the sprinkling of the hilasterion ("mercy-seat") by the high priest on the Day of Atonement, and whether this was "ad frontem" (Nova Vulgata) or "ad orientem" (as LXX and Fathers interpreted). My point was that the "front" was the eastward side, but that the priest himself faced westward.
Ezekiel has harsh things to say about the priests who faced the rising sun with their backs to the Temple. It is the altar that represents Christ, on whichever side of it we stand.
If the Lord is going to return on the Mount of Olives, our "orientation" will depend on where we are in the world.