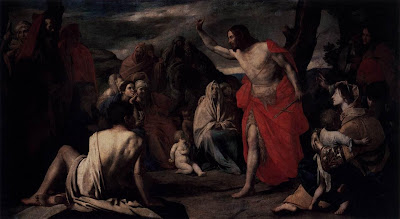 Austen Ivereigh has an interesting article in America in which he calls for a "covenant of civility" amongst bloggers and also, I presume, he would include journalists and other commentators on the state of the Church.

I agee with him, at least in part, I often do. He also apologises for using the term "Taliban Catholics". I find that term distasteful but I think some bloggers and journalist, and commentators do tend towards the "Taliban", others are just "robust". So robust that I can't be bothered to read them, and I suspect few do.

I am less happy with Mr Ivereigh's suggestion that people should stop identifying dissent for what it is, after all the Pope himself said to our Bishops on their Ad Limina visit, "It is important to recognize dissent for what it is, and not to mistake it for a mature contribution to a balanced and wide-ranging debate." Whether he meant "recognizing dissent" as being part of our Bishop's charism or something all Catholics should be involved in is matter of debate. Obviously for a Bishop to do so has more far reaching effects than a mere parish priest or a parent, they can decide whether a school or a newspaper or organisation may or may not describe themselves as Catholic.

Discerning what is authentically part of the Tradition and what dissent is, is part of Catholic life, identifying tendencies towards heresy is tool towards that discernment. Newman speaks of "magisterial intolerance" of error and falsehood, Ratzinger in Truth and Tolerance takes up the same theme. Culturally we might not be into the open confrontationalism, not for us the beard tugging of Nicea, or French walk outs or even the stern clear rebuke of a Bruskewitz or the honest refutation of a Pell. We are more into being Disgusted of Tonbridge Wells writing  letters or pamphleteering, or latterly blogging.

There are not a variety of Truths, there is only one, it is not obscured but plainly reveal as the person of Jesus Christ. St Paul tells Timothy "to call to obedience", ultimately that is a episcopal act but it is also something which belongs to all the faithful by virtue of their baptism. Speaking Truth unto Power is a Christian duty, it should part of taking up one's Cross. I think it is possible that Mr Ivereigh could be suggesting that the duty of lay and even clerical Catholics is simply to pray, pay and obey, I hope he is not. That just encourages rampant and abusive clericalism, whether it is from clergy themselves or their growing number professional catholic voices.

It was the failure to hold to account that lead to the crisis caused by cover-up following the abuse scandals, which . There are in the Church necessary tensions, Paul rebukes Peter publicly, and is happy to tell the story afterwards, yet he also seeks to be obedient and in communion with Peter in all things. If the Church in the last forty years lacks anything it is a loyal opposition. The fudging of the Masgisterium has lead to a catechetical and moral wasteland. Thank God for prophetic voices like Daphne McLeod who has demanded clear and authentic catechesis and John Smeaton who continuously points out the dangers of our anti-Life culture, and tendencies towards it in the life of the Church.

In many ways these and others are prophets, as are the various disgruntleds who follow in their wake, they are necessarily critics of bishops and clergy. They are a necessary source of scrutiny. Like John the Baptist they have a duty to make us uncomfortable. The bishops and clergy are called to hold in communion, to gather the broken and the weak, to work for conversion and consensus, to walk at a pace the flock as a whole can follow as the gently lead it onward. The role of the prophet is to be the lone voice in the desert, crying out aloud, rebuking, urging, condemning, even threatening, to point out dangers. It is often their role to be downright and uncivil, to actually get angry, even to be abusive; often of course this might well be sign of lunacy but one man's prophet is another man's nutter.
at April 19, 2011

The hardest thing I find as a blogger is the division between "types" of Catholic bloggers mainly in matters of Liturgical preference. I am happy going to EF OF Masses but find increasing intolerance in the blogosphere...

Jackie Parkes has a good point. We do seem to be becoming polarised. I can remember a time when parishes had just two 'types' of Masses - High Mass and Low Mass.

As Jacquie points out there does seem to be increasing intolerance in the blogosphere. Those who prefer the NO seem to be terrifed of the spread of the TLM as they see it as 'going backwards.' And some followers of the TLM don't even accept that the NO is legitimate.

Three or four years ago when talking to an elderly Priest about changing parishes he expressed his fear that the resurgence of the TLM could bring division in the Church. We can only hope and pray that this will not be so.

The vocabulary used in this post reveals an aggression I don't find in the traditional Roman Catholicism in which I was raised and remain...

"... crying out aloud, rebuking, urging, condemning, even threatening, to point out dangers. It is often their role to be downright and uncivil, to actually get angry, even to be abusive".

He spoke through the prophets but God has been finally revealed in Jesus Christ,the God who kneeled to wash his friends' feet.

Sean,
The vocabulary you object does seem to be consistent with the role of OT prophets, even with the Lord himself at times.

"White sepulchres", "hypocrites" etc are not the words of an English gent but they are Jesus'.

There is a serious danger in making the Lord or his Church in our own image!!!

The blogospere is a new forum enabling a wide variety of inividuals to engage and express themselves to an equally diverse audience. It is often a rough and ready place- a wild west of social communication. These are still early days but I expect that in time things will settle down as we all become more discerning. In the meantime it is not difficult to appreciate the discomfiture of journalists and other "professional Catholics" at the rise of the amateur.

They are no longer "Taliban Catholics" but merely "proud devils" of the Jansenist school.

It's interesting, isn't it, that the present communications revolution has arrived, like the previous one, in the middle of a crisis in western Christianity. In both instances it has served to carry unprecedented volumes of toxic effluent into the mainstream. In both cases, the "still, small voice" has frequently been drowned in a bedlam of delusion, egotism, psychopathological projection and cognitive dissonance. Kyrie eleison.

The answer isn't a "code", and it isn't yet another Orwellian frenzy of ideological waggon-circling. It's the same answer it's always been, the one that finds supreme practical expression in the Lenten Prayer of St Ephraim the Syrian:

O Lord and Master of my life! Take from me the spirit of sloth, faint-heartedness, lust of power, and idle talk. But give rather the spirit of chastity, humility, patience, and love to Thy servant. Yea, O Lord and King! Grant me to see my own errors and not to judge my brother; For Thou art blessed unto ages of ages. Amen

Is AI really having a go at the Pope over "dissent"? As you point out it was Pope's word.

Uk usage as above

Three or four years ago when talking to an elderly Priest about changing parishes he expressed his fear that the resurgence of the TLM could bring division in the Church. We can only hope and pray that this will not be so.

The only thing that has brought division amongst the people of God are the liturgical reforms and the theological implications that follow therein.

Thanks for your excellent post, Father. There must be room for discussion and freedom of speech, always within the bounds of charity;-
'The Lord be in our minds, in our eyes, on our lips, and in our heart'.

atholic Bloggers, let's have a drink in Rome on May 2nd, right after the official Vatican Bloggers event ends.

We'd be really happy to meet you there! More info on http://www.catholic-bloggers.com

So Austen is dropping "Taliban" in favour of "Jansenist". The problem with "Jansenist" is that it is a term which is often used but very difficult to define. Pascal was accused of Jansenism but read his "Lettres Provinciales" and tell me what is unorthodox in what he writes. Some say he was not really a Jansenist or was moving away from Jansenism. Read Ronald Knox on Jansenism - it is still very difficult to put one's finger on what was wrong particularly as they were accused of things which they hotly denied. They considered themselves very unworthy, not having much faith in God's grace, and made the rest of the world feel even more unworthy and generally came over as an exclusive and snobbish lot which irritated many people. To-day they are generally seen as discouraging frequent communion to the extent of suggesting it should be only a yearly event. But what else? I suspect that most people using the term "Jansenist" would be hard put to explaining exactly what they mean other than disliking a "holier than thou attitude".

I certainly have not seen bloggers suggesting infrequent communion. Unless suggesting belief in the real presence and greater respect for the sacrament can be caricatured as such.

Austen then goes on to give a technical meaning to "dissent" which I do not think the word will bear. He suggests that only certain Church authorities should ever decide that something is "dissent". That is over the top. I really think we must stick with the common understanding of the word as "disagreeing". I believe he has called for a new sexual ethic and has given a liberal interpretation to the Pope's recent remarks on the use of condoms. If this is correct is he not dissenting from or disagreeing with traditional Church teaching?

I think to say that ordinary laypeople should not express their concerns, when there is silence from the Bishops on doctrinal issues or administrative decisions that seem to undermine the Catholic position, is ridiculous.

Would he agree that there is another extreme diametrically opposite to Jansenism into which the English Church has fallen?

One of my favourite cartoons was by Brocklebank. It was a picture of a English Pub with the RAF Padre, with handlebar moustache, standing at the Bar and quaffing a foaming tankard of beer and perhaps recounting some risquee joke to his companions.

In the corner there are two men sitting at a table and one of them is saying to the other "I simply cannot stand his unholier than thou attitude".

I often feel that!