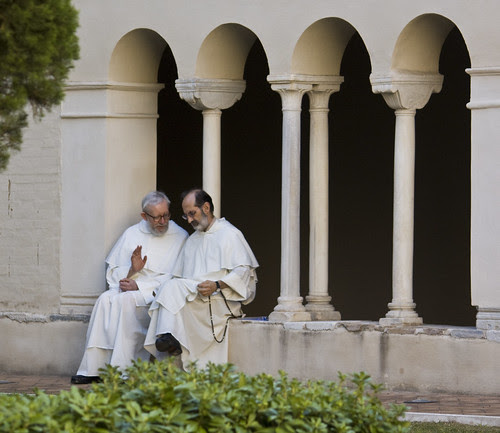 Rome Reports has the whole of the Pope's Lenten Message up, I thought this extract on fraternal correction was most interesting. How do we put into practice?
Fraternal correction seems to be entirely absent from contemporary Ecclessiology, its lack has meant that the Pope himself had to correct the Twowomba for example, or the CDF had to correct loonie theologians. One of the faults of the post-Concilliar Church though not of the Council is to make "ownership" of the faith a specialism rather than something which belongs to the whole Church.

“Being concerned for each other” also entails being concerned for their spiritual well-being. Here I would like to mention an aspect of the Christian life, which I believe has been quite forgotten: fraternal correction in view of eternal salvation. Today, in general, we are very sensitive to the idea of charity and caring about the physical and material well-being of others, but almost completely silent about our spiritual responsibility towards our brothers and sisters. This was not the case in the early Church or in those communities that are truly mature in faith, those which are concerned not only for the physical health of their brothers and sisters, but also for their spiritual health and ultimate destiny. The Scriptures tell us: “Rebuke the wise and he will love you for it.


Be open with the wise, he grows wiser still, teach the upright, he will gain yet more” (Prov 9:8ff). Christ himself commands us to admonish a brother who is committing a sin (cf. Mt 18:15). The verb used to express fraternal correction - elenchein – is the same used to indicate the prophetic mission of Christians to speak out against a generation indulging in evil (cf. Eph 5:11). The Church’s tradition has included “admonishing sinners” among the spiritual works of mercy. It is important to recover this dimension of Christian charity. We must not remain silent before evil. I am thinking of all those Christians who, out of human regard or purely personal convenience, adapt to the prevailing mentality, rather than warning their brothers and sisters against ways of thinking and acting that are contrary to the truth and that do not follow the path of goodness.

Christian admonishment, for its part, is never motivated by a spirit of accusation or recrimination. It is always moved by love and mercy, and springs from genuine concern for the good of the other. As the Apostle Paul says: “If one of you is caught doing something wrong, those of you who are spiritual should set that person right in a spirit of gentleness; and watch yourselves that you are not put to the test in the same way” (Gal 6:1). In a world pervaded by individualism, it is essential to rediscover the importance of fraternal correction, so that together we may journey towards holiness. Scripture tells us that even “the upright falls seven times” (Prov 24:16); all of us are weak and imperfect (cf. 1 Jn 1:8). It is a great service, then, to help others and allow them to help us, so that we can be open to the whole truth about ourselves, improve our lives and walk more uprightly in the Lord’s ways. There will always be a need for a gaze which loves and admonishes, which knows and understands, which discerns and forgives (cf. Lk 22:61), as God has done and continues to do with each of us.

Sigh, I had a post on my blog a few days ago on this point. I wonder if the Pope reads my stuff? lol Seriously, it is more important to lose a friend than chance that a soul is lost to hell. We must be kind, clear, but really loving with
tough love". Thanks for posting this. God bless your ministries.

Very nice place once you have got up the steps!

Thanks for this it is very good.

Have you heard or seen the Pastoral Letter of + Mark Davies for the First Sunday of Lent?

It is very, very good.

How did I get it, not being near Shrewsbury, you may ask?

I will tell - but only in the Confessional!

I very much recommend it to everyone.

I don't know how you do it but you are right, the First Sunday of Lent will make the faithful sit up in their pews!

You said that your Confessional is 'Open All Hours'. I liked that idea and I am trying to do this for Lent.

I need to figure out where you get the info from or have you got special gifts??

Isn't it strange that so few have commented on this crucial moral duty considering that it was the need for the application of same that was at issue in the discussion of the terrible abuses at the "Soho Masses"?

"Be open with the wise, he grows wiser still, teach the upright, he will gain yet more” (Prov 9:8ff)!! Is the Holy Father hinting that the laity should correct the hierarchy? I hope so though, from earlier contact, I feel that the hierarchy may not have read this passage.

That's the courtyard of Santa Sabina, motherhouse of the Order of Preachers!