Who are these monks? Was a question many asked last week when I begged for a little money to buy some choirstalls. The answer is: they are just silent men living a silent life. A longer answer is given on NLM in an interview with the Prior of the Monastère Saint-Benoît. 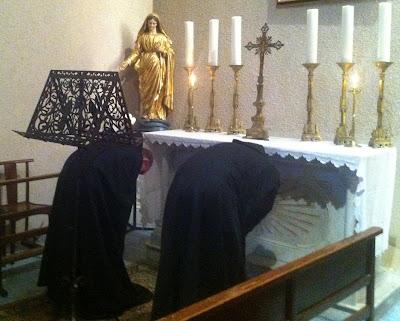 They are in the diocese of the excellent Mgr Dominique Rey, the Bishop of Fréjus-Toulon in the South of France and their foundation is his initiative. Apart from the diocese of Paris, his diocese has half as many vocations as the rest of the French dioceses together. The bishop himself happily promotes and ordains men to celebrate both Forms of the Roman Rite. Father Prior says of him-


The bishop and the diocese have been, and remain, utterly supportive. Bishop Rey’s approach is to always ask how he, as a bishop, can encourage and further the growth of the Church. He is willing to put his person and his diocese behind initiatives that he believes will further the Kingdom of God on earth. He looks for solutions, not problems. So too do his team – from the vicar general, his secretaries and canonists, his financial officer, etc. All work together in order to build up the Church – to be sure, on sound financial and canonical foundations also!

The bishop himself happily promotes, and ordains men to celebrate, both Forms of the Roman Rite. The Monastery of Saint-Benoît uses the Usus Antiquior. The Prior says it "...is about first becoming liturgical myself, about being steeped in the sacred liturgy, about letting it form whom I am and how I live, about allowing it to bring about that conversion of life that is at the heart of the Rule of Saint Benedict."

I can't help thinking that Summorum Pontificum was a great boost for contemplative communities. Monasteries are by nature slow moving but those monasteries which have adopted the Usus Antiquior seem to be the ones which are thriving. As one elderly French monk once said to me "the old Rite gave us less time to think about squabbling and less to squabble over." I kmow some monasteries use the same Office as secular clergy, it hardly seems to form "liturgical people".

Saint-Benoît is a tiny, almost embryonic monastery, their community has been borne out of a reat deal of suffering, it has been in gestation for a number of years, it came to birth on the Feast of the Immaculate Conception last year. I was touched by the final words of the Prior in the interview, when asked about the future:


It holds the next monastic office, the next opportunity to exercise fraternal charity amongst the brethren, the next occasion to endure suffering in faith and hope, the next opportunity to welcome as Christ the person who comes to the monastery who perhaps is not even aware of the need to search for God. And if I am faithful to what the Rule commands of me in each of these circumstances, the future holds – no, it promises – that God shall be praised and found, and that in this I shall be more conformed to Him.

How heartening to read this. The monks are added to my list of Lenten donations.