I used to wash the feet of the poor 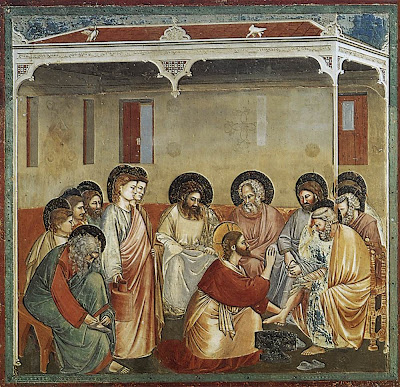 I used to wash the feet of the poor on Holy Thursday, I don't do it anymore. In Brighton it is pretty easy to find a dozen homeless people for the foot washing at The Mass of Lord's Supper. They are more than happy to do something on a Thursday evening and to have a part in the drama, and if you also offer a new sleeping bag or better a small amount of cash they are quite delighted. And the good thing is the sign it gives: we are a Church who puts the poor at its heart, and you are a priest who cares for poor.


I have stopped doing it, because it was seriously sinful. I was using the poor, and exploiting their poverty and I was using the liturgy to satisfy my own pride. It rather thrilled me that people would suggest this parish and I were more concerned about the poor than the next door parish. If I was willing to give up my bed or what is more valuable to me, my solitude and silence, even the simplicity of my life it might have been of value. There is a great danger for priests and bishops to use religion as theatre.

True humility is really about going against one's nature and natural inclinations rather than giving into them.
See this post by Fr Zeeeee on those read shoes, I can't help thinking of that old man who was our Pope when he would have preferred the solitude of his study or the simplicity of his apartment on the other side of the Vatican walls rather than the crucifixion of the Papacy as an example of true humility.
at March 18, 2013

Father
I have no words ..after reading your post.......other than it brings tears to my eyes.
Thank you
Sandy.

Thank you for this post Father.Amy welborn has another explanation for the red shoes.She says that they are symbolic of the Blood of Christ and the blood of the martyrs upon which the Pontiff stands.
Sandy

The thought may be there but the corresponding angle is often missing. What Pope Francis was able to do as archbishop may elude him as he is assailed 24/7 by the cares and duties of his pontificate.
Like Benedict, he will be unable to accomplish much of what he clearly longs to do. As with Benedict, that will be his cross to bear.

Dily, very kind but forgive for not publishing your comment.

There is a horrible loop it is possible to get into in trying to avoid the potential pharisaism in charity on the one hand and being un-caring on the other. The foot washing is part of the liturgy but why not just draw the names of parishioners out of a hat, or something like that?

I think some people who help on soup runs do it for the company because they are lonely but where is the harm in that? Better than staying at home and feeling sorry for oneself, surely.

Isn't God so good and merciful to show you these things. Blessed be God.

Amen, Father. Thank you for this.

Fr Z said (with regards to the liturgy which is deliberately beautiful and sublime which made him uncomfortable at first): "I had fallen into the trap of thinking that [it] made me look too important...The fact is that none of those gestures were about me at all. They are about the priest insofar as he is alter Christus". Peter (the first Pope) at first refused to have the Lord wash his feet, his sense of propriety was so offended, to submit to such a personal extravagance, to sit and allow the Word Incarnate to make a special symbol and sign of washing one's feet; but it was the humble and proper thing to do - the act was beautiful, rich liturgy. The beauty, those rich signs and symbols that are part and parcel of being invited close to Holiness is what the Church lived. A couple of posts back gemoftheocean repeated what the Church has always taught: "The liturgy is to be a foretaste of heaven." A Church trying to teach us not to look for heaven in the liturgy but in worldly things like hunger and unhappiness, in others in a buddhist sort of 'the buddha in me acknowledges the buddha in you' fashion seems to have lost its unique purpose; the message of poverty is preached everywhere these days, anyone can find a myriad of mediums whereby they can help the poor, institutions relgious and secular abound, and yet we still have poverty. we have welfare systems in the West and we still have homeless. The Church cannot 'end world poverty'. That was never Her unique role - the sacraments bringing eternal realities into time is something only the Church can do. people show up to Mass, or at least some, hungry, tired, needing the 'life and strength' of Christ in order to live His Words. Holiness is beautiful and were the liturgy too lacking in beauty it would be lacking in holiness. 'leitourgos', "one who performs a public ceremony or service, public servant,"; meaness of liturgy seems to me, simply meaness in the 'leitourgos' - 'performing the service' with as little self-sacrifice for the sake of the 'people' in the world who might just become citizens of heaven, as possible.

If a man went out of his way to make a point about being humble, that person does not necessarily commit the sin of pride if he continues to live a life of simplicity. In any case, if that person cloaks himself with false humility and knows that what he has done is sinful then he should seek forgiveness for that act in confession. And that should be the end of that saga.

What is the catechetical benefit of: “I used to wash the feet of the poor, now I don’t…”? Does it not tend to commit false humility all over again? True humility is foregoing “I” and similar forms which points to self and submitting to God and others for God’s sake. We all struggle towards that but perhaps, The Litany of Humility is one that can help direct us towards the virtue upon which all other virtues rests.

recently the parish priest informed us in the Sunday homily that 'the kingdom of heaven can be found in a rubbish dump'  (that verbatim ) - he didn't qualify his statement - is he speaking of people who live on and survive off dumps. I used to live a stone's throw from where food companies trashed rotten goods...IMO the Kingdom of heaven neither looks nor smells like a dump which means he is taking the gnostic Thomas 'the kingdom of heaven is inside you', the Gospels of the Canon have Christ say what the Kingdom of Heaven is like - the wise maidens, the merchant after the precious pearl etc. Christ warned not to cast pearls before swine. If the pastor is right it must be a false heart that seeks the kingdom at mass.

Father, I'm not convinced that the homeless people's appreciation of this shouldn't have trumped your concerns about your own motives. If I waited for my motives to be 100% pure I'd never do anything!

Mr Gumpy - in my own experience, many times the poor want to be included but not exclusively singled out. i.e. if you've got 12 guys and one or two are homeless that's one thing. But exclusively all homeless says something else.