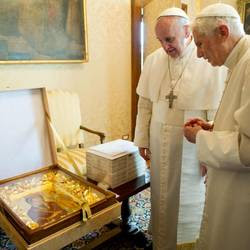 There is nice little piece by Tornielli on what unites the Pope and Pope-Emeritus. I think we should regard them as, "Brothers". Tornielli also puts pay to the rather rude remarks to Mgr Guido Marini, that flashed across certain blogs, which from what we have seen so far seems quite out of character.

P.S.
I like the idea of Pope Francis "recycling" presents, the icon he gave to Benedict had been given to him a few days earlier by Metropolitan Hilarion.

P.P.S.
What are those white boxes about, is it the same box?

That might be the written results of Vatileaks to be handover to Pope Francis.

I believe the white box contains the Emeritus's Pope's post.

Anyone who has moved home will understand the problems in redirecting post. With the Italian postal service notoriously unreliable one can assume this will be problematic without intervention.

Benedict: "Are you sure the white Cassock in that small box will fit Father Ray?"

White boxes? it's what the Aussies call an Eskie.... a cool-box containing lunch!

The new pope is very collegial, it seems, and very sincere.

I have just come from a Holy Monday recollection presided over by Cardinal Tagle (he has given the Holy Monday recollection at our church for the past 16 or 17 years) and he told us this anecdote. On the first day after the election, all the cardinals were invited to the Mass at the Sistine Chapel. By tradition, all cardinals vest together prior to the Mass, and the Pope vests in a separate room. So all the cardinals were vesting, rather noisily, since the conclave was over, when the Pope entered. Sudden silence. Then the Pope told Msgr. Marini, "you can put the vestments there. I will vest with my brother cardinals."

So you are right that the nasty remark attributed to Pope Francis about the mozzetta seems out of character.

"You have already accumulated over $64,000 dollars in winnings Your Holiness. You can stop now and take it home with you, or you can trade it all in for what's in this box." :D

Is it the Papal equivalent of the red dispatch boxes used by ministers of her Britannic majesty, I wonder?

Recycling presents reminds me of my grandmother returning to my wife what we had bought her a few years prior. I didn't think it was very classy then and don't now. A present is for the person they should "recycle" discretely and allow agood passage of time to elapse. Could it not offend Metropolitan Hilarion.

Fidelisjoff -- try not to take offense. Your grandmother is likely forgetful that you gave it to her in the first place. Older people often have trouble going out shopping, and many haven't caught on to the "buy it on line on Amazon and have them gift wrap and send" concept. Also it may well be a nice item she has no use for and rather than have it sit gathering dust in a closet, instead of becoming a candidate for "hoarders" unwittingly gifted it back to you.

According to Vaticanista Robert Moynihan, Hilarion is not upset. Moynihan has reproduced some correspondence between himself and the Metropolitan:

“Pope Francis presented to Pope emeritus Benedict the icon which had been presented to Pope Francis by Metropolitan Hilarion on behalf of Patriarch Kirill [the head of the Russian Orthodox Church] after the private audience [with the new Pope] on 20 March. Отправлено с iPhone [Sent from iPhone]“

So the icon was the Russian icon Hilarion gave to Francis three days ago!

I wrote back: “Amazing. Are you pleased, or upset?”
I added: “It is reported here: ‘They spent 45 minutes talking alone. Pope Francis gave Pope Benedict an icon of Our Lady of Humility, saying that when he received it, he immediately thought of giving it to Pope Benedict.’”

This is the best video I have seen so far with Pope Francis. Enjoy!!