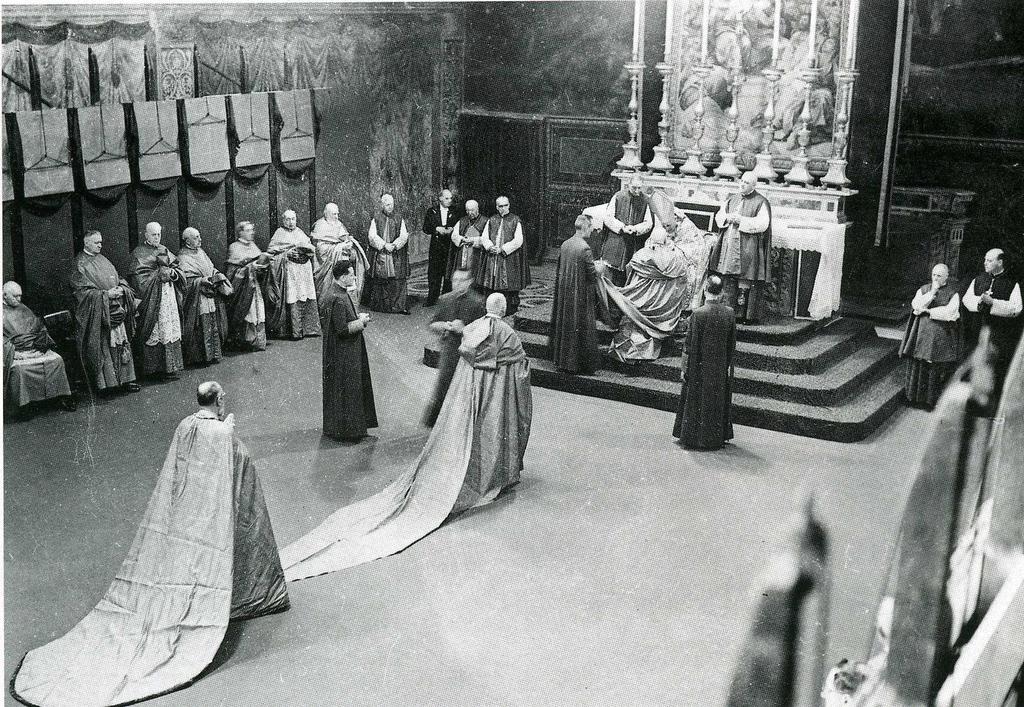 Now a Pope has shown us he can retire, endless questions are raised about the future of the Papacy, if Popes like the rest of us in the future can live to over a hundred, we could have two or three Popes living in the Vatican annexe at one time. So just a few questions for speculation:

Idle speculations, indeed!
But some things to think about whilst we watch and pray.
at March 12, 2013

It makes no sense to require retirement at a given age. Especially as supposedly the Holy spirit is supposed to be the prime mover in these matters. I think it very wise of Benedict to resign, gracefully, as he did, if he feels he can no longer do just to the task. For all we know, the pope was told he had shown signs of impending alzheimers or something else which could be mentally debilitating. Far better to retire to seclusion in that case than to soldier on.

The word that I have heard about Benedict is that he is loosing weight and he is now blind in his left eye. He saw what went on when John Paul II had lost it and he was not going to let that happen under his Papacy. Hence his abdication.
Your speculations are interesting Father but I don't think that we need to worry about them now. Sufficient unto the day is the evil thereof.

Unlike Gem, I think the former Holy Father's retirement an unmitigated disaster.

As to your questions, the answers are no, yes, and yes.

No one has the power to demand conditions from the pope, or to bind him in any way. And per Canon Law and the constitutions governing the Conclave, no one may put any preconditions on the election of the Supreme Pontiff.

Regarding delegation, the dicasteries already act in the Pontiff's name, with limited delegated authority, on many issues. Yes, that might be extended.

In the mediæval period, many Conclaves required all their members to swear on oath to do certain things if elected Pope - but all these "capitulations" were promptly disavowed once the one chosen became Pope upon acceptance of his election. Basically, the Pope is judged of none, and so cannot be bound by any prior promise.

Apparently the question of whether the Pope could appoint a Coadjutor with right of succession was raised in the nineteenth century, but it was theorized to be incompatible with the Papal office as it has been chosen down the ages. It is beyond my competence as to whether this is therefore impossible.

As to delegating all or some of his workload to a Legate or Legatine Council, this seems to be something that could be done theoretically, but it would hardly be seemly or fitting: at all times, the Pope would remain in ultimate command and could at any time reverse his grant of legatine powers, or change or veto any particular act of his legate(s).

I said this was a master stroke on the part of the Holy Father and I also believe that Gather Kung's comments recently, support that.

I am not happy with the resignation. The Pope was not managing the Vatican anyway as three books in eight years testifies. I see no reason why Ganswein could have not run things as the Pope's health declined but there is no reason for the Holy Father to leave his appartment in the final years. He might have actually started to manage and the results could have proved interesting. This resignation and his literary output imply that the Church is ungovernable anyway which is adding to the confusion.

Jon, but suppose he IS losing it mentally? Isn't it better to retire gracefully than have a captain at the helm raving about "who took the strawberries" from the wardroom? I watched my own husband deteriorate and die from a brain tumor, and these things are not fun to watch up close and personal. Not saying the Pope Benedict has that condition, but just in case - it's better to get out when you're still compos mentis. I pray it's nothing like that, but one just doesn't know. [Yes, I think it would have been nice had he reigned longer.]

The Holy Father said that God told him to resign. I don't have a hotline to God, but who am I to say Benedict doesn't? It is not for us to judge, just to pray for him and his successor. If subsequent Popes feel they have to bow to pressure to follow in his footsteps, then they are not strong enough to hold that office. I don't recall reading that the Popes who followed Celestine felt they had to. why should our next Pope?