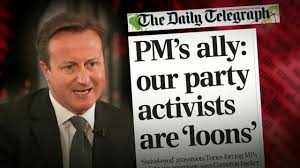 There was a time when it seemed that the Church's leadership in this country seemed to see much of its membership as "swivel-eyed loons" who needed to get with the programme. There was a tremendous gulf between the leadership and "activists" and suddenly we found Mass attendance plummeted along with vocations and practically everything else, see the statistics on the LMS site. The response by Hume and Warlock was to attempt to restructure the Church in England and Wales, which still hasn't quite worked, still there seems to be a gulf between the leadership and activists: those pro-lifers, traddies, those expect fidelity to the Magisterium and object to the The Tablet and would avoid Tina lecture. And rather like the Conservative Party (the same could be said for most of the other parties too) the Church seems concerned about internal issues rather than any serious attempt at mission or proclamation of its message.

The problem for both the Church and the political parties at the moment is that they both lack any "big idea", apart from "Equalities". For politicians this manifests itself in gay "marriage" and therefore the unequal ascendancy of the Homocracy; for the Catholic Church it has unleashed a whole raft of "equality" issues that seem to undermine the essential Catholic message of its uniqueness, Divine origin, the priesthood and much else.

In politics and religion the absence of any "big idea" is likely to result in the irrelevance of both. "Equality" in religious terms has led to seeing all religions as being the same and none of any particular value and all worshipping at the altar of "niceness". In politics it will result in the short term of endless legal wrangling but eventually a politics that lacks any distinctions where all parties attempt to impose a rainbow fascism on its citizenry by control of their speech and even thought.

Perhaps Pope Francis is offering a possibility of alternative, a big idea, for Christians to get behind, of reaching out to "the poor". In our present economic situation is it possible that this could actually be an attractive idea for politicians too?
at May 21, 2013

There are many Christian groups which run charity shops (I like the US term better 'Thrift Shops') which reach out to the poor and the not so poor.

LIFE runs a Charity shop in Weymouth concentrating on baby clothes and equipment and children's clothes. Customers have said that they don't know what they would have done without it. So it fulfills a need.

As Pope Francis spoke on the Vigil of Pentecost, “This current crisis is not just economic; it’s not just cultural; it is a crisis of humanity. What is in crisis isn’t the financial system but mankind. And what’s being destroyed is mankind. This is why it’s a profound, deep crisis. We cannot in this moment only be concerned about ourselves, to close ourselves in solitude and discouragement and think that we are the only ones who have problems. I ask you, please, in a small way, don’t close yourselves into a small nucleus or group of people in the parish or among friends or people who think in only the same way as you. People who are self-referential, who close in on themselves, a community that is self-referential and closes in on itself – they grow ill.”

We have to re-light our beacon. We begin with

Then we need to do some good works in accordance with our abilities. The Church will start to grow. The people are hungry and looking for a sense of identity. Desparately. Feed the lambs. If the state of the Church were a time of year, I would say that it is now in the third week of January.

Whatever happened to The St. Vincent de Paul Societies - operating in parishes throughout the land.

Oh! I know: The Bishops' Conferences transferred their work to The State - organising political 'pressure groups' instead.

I think the decrease in vocations to the priesthood in the 70s had less to do with the distance between Church leadership and membership than with parts 15 and especially 16 of Lumen Gentium. Once the Church officially declared that non-Catholic Christians, Jews, Muslims and even atheists could obtain salvation, there seemed to be little point in staying celibate and dedicating one's life to bringing people to what had just been declared only one of many ways to salvation. LG 15-16 did not help the issue of the emerging (false) religious equality either...

These first four posts are excellent, Thank you ladies and or gentlemen.

It is so good to read posts which do not harangue or vitiate other posters.

I can’t talk about other countries, but here in the US I think it may have become a bit top-heavy. Here, they operate ‘Thrift Stores’ where donated items are sold and the funds raised are used to help the needy – and cover overhead.

But it appears that parochial units of the Society are expected to ‘contribute’ to the diocesan or county headquarters to cover overhead – much like parishes being assessed a contribution by the diocese.

For this reason our parish recently dropped their affiliation with the Society, figuring the funds could be more properly used for the local parish community. The work still goes on but controlled by the parish volunteers.

As with all charities - especially here in the US - the concern is always about how much of what is donated actually reaches the needy and how much is consumed by 'overhead'.

The St. Vincent de Paul Society runs charity shops here in Western Australia too, GOR. Locally they are known as "Vinnies". Almost all of our Churches have Charity Bins outside where people can donate used clothing. It used to be possible to donate other items but a series of regulations have been imposed by Government so that one can no longer donate used electrical items even if they are perfectly good and useable.
Unfortunately these bins also became dumping grounds for unwanted rubbish and the Vinnies found themselves having to pay for the disposing of rubbish. They will come round and collect used furniture but you have to ring them up and ask for this service.
The items are sold in their shops and the proceeds go to the Society. A very dear friend of mine is very active in the Society and he has done all kinds of things for the needy (and the feckless!) like sorting out their Telephone Bills and finding them accommodation. We had a mother and her six children living in our Parish "Rooms" as a temporary measure until he located a more permanent arrangement. Knowing her...and I do...the degree of permanence may not be for very long and then she will be phoning him up to sort her out again, and again......!

The SVP does a good job in its way, unfortunately necessary, but the underlying problem is the mistake made by the Society's patron, when he got the aristocratic women at court to go around Paris doing good works to the poor. He apparently never thought to ask why there were all those poor people in Paris at the same time as a handful of aristocrats were living lives of the utmost extravagance at court?

Humanity in general, and the Catholic church in particular, have paid a terrible price over the years due to its failure to ask this fundamental question. In France, this was ultimately to lead to the Revolution. Pope Leo XIII's failure to address the same question in Rerum Novarum left Catholic workers' organisations unable to answer the challenge of Marxism in the twentieth century. It had nothing better to offer than the concept of the "just wage", a notion completely ignoring the economic laws by which wages settle at the rate they do, and how other costs, for example, housing, find their level accordingly.

True charity is founded in Justice, as Benedict pointed out in Caritatis in Veritate. We need to start asking "What does economic justice consist of?"

A good place to start is a recent book by an economist called Brian Hodgkinson, "A new model of the economy". Get reading, chaps. If the problem is to be solved, we cannot even begin if, like St Vincent de Paul, we do not even know what the underlying cause is and what would need to be done to fix it. It is not use explaining it away by talking about "greed". That is a lazy and useless absence of thinking.

The Vinnies are very active and very popular in NZ. There is a food collection for them every week at most churches, they have charity shops (here they're called'Op Shops' short for Oportunity) and they're very visible and very respected.

The Gays are not just a concern for politicians. There is a great essay on the effects of Homosexuals on our Church here: