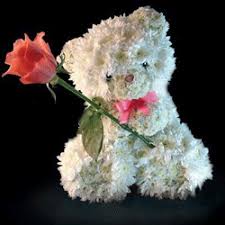 I did a funeral this morning for an unbaptised premature baby, she was just 17 weeks. Apparently, mum had been to our local hospital, the Royal Sussex several times and been sent home having been told the pains she was experiencing was just something she'd eaten, I mention this only because a couple of months ago another mother, one of our parishioners, miscarried and then had various life threatening complication, she too had visited the hospital several times over a couple of days and been told something similar. Two stories don't make a trend, but here are two women who weren't listened to, the lady undertaker told me that England had the highest miscarriage rate in Europe.

What rather surprised me is that apparently the young mum and dad had turned up at the Church looking for me a couple of weeks ago according to a parishioner 'with a box', I was out so they went away, next I had a telephone call from a young woman asking how much a funeral cost, I told her that Catholic churches tended not to charge and that she should see should contact an undertaker, I hadn't realised it was for a baby. Fortunately she went into see one of the good guys in the business. The 'good guys' don't charge, they provide their services absolutely free, so I was pleased this morning that Emily picked me up in one car and the mother and her family turned up in a Rolls Royce with Aaron, the funeral director and a driver, and the baby in a tiny coffin, resting between mum and grand ma on the back seat.

Emily told me the funeral directors were rather surprised that the mother and father had turned up at their office with the baby's corpse. Something had obviously gone wrong with counselling at the hospital, the problem is of course that they hadn't had a baby, their child couldn't be registered, result of this girl's pregnancy had been 'foetal remains'.

Heartwarming Father - and good for the funeral director.

My wife’s first pregnancy was with twins, but it was God’s will that one was stillborn. She was baptized and we gave her the name Kathy. Then too, the funeral director did not charge for the burial of our little Kathy. Though she never drew a breath, I got to hold her and she has always been very real to me and to the family. We feel that we have been given another advocate in Heaven. She would have been 35 today had she lived.

I am praying for this couple and their family. It sounds as if they badly needed to find a priest and a funeral director who would honour their baby girl as an actual human being after their treatment at the hospital. Thank you for the part you played in respecting the precious life of this little baby.

'foetal remains' - just how more disrespectful of a human being can language get?

This is a sad story. Something needs to be done about the hospital. There should be an evaluation to determine how effective they are in terms of maternal and child care. Those little angels will thank all the 'good guys' from heaven.

My mother lost several babies as miscarriages, plus my sister at one. Altogether, four...

The miscarriages were buried in the Catholic hospital cemetery, but that was a long time ago. When the nuns had to sell their hospital to a lay group, the little cemetery was destroyed. Few would remember those little ones.

My sister, of course, had the rites as a baptized toddler. She is buried in the Catholic cemetery in Davenport, Iowa. But, in our day now, life means little to most people. I am curious as to why Britain has such a high rate of miscarriages. Could it be bad care in the NHS? I have the same problem as my mom, or did in child-bearing age, of the Rh Factor, which can cause incompatibility with the fetal blood, and death of the little one. The shots after a birth should be common. I wonder if these are now given as a matter of routine. I had that injection in the old Cuckfield Hospital after my son was born.

One wonders if pre-natal and post-natal care is suffering from anti-life forces. God bless you and I am glad there are some compassionate good guys out there to help.

Supertradmum it isn't the anti-D injections that is the issue, these are routinely checked, but speaking as someone who has had 3 babies at the Royal Sussex, I can come out with more than a few horror stories of my own.

Put simply, the maternity unit is over-stretched and so they don't have the time to complete anything more than basic checks when you present with an emergency in pregnancy.

The issue of 'foetal remains' is tragic. Usually if you have a miscarriage under 24 weeks it is beholden on the parents to request the body, normal procedure is that he or she goes in the sluice. Most parents do not realise the importance of a funeral until it is too late. Furthermore I've witnessed grieving mothers taunted and vilified as 'freaks' on parenting forums for insisting upon a burial and tending to the grave of a 12 week old baby.

Abortion has led to a general coarsening of attitudes towards miscarriages.

blondpidge, I did refer to anti-life forces, which are abortion and contraception. I was just wondering why there are so many more miscarriages in GB than in other first-world countries. I shall do some research.

Of course, anti-life is the name of the game in all government sponsored health care programs.

What a terribly sad and poignant story. I pray that baby girl is with Jesus now and one day her parents may see her again. May the family be comforted by the Holy Spirit in their grief and sorrow, and blessed with another child.

The horrors of the NHS need to be revealed. Thank you for bringing this matter to light, Father.