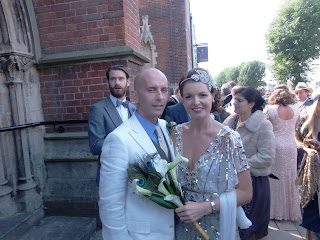 I had a lovely wedding, a bit retro, the one in white is Stewart, the one 'standing like a queen in robes of gold' is Hazel his bride in what I suppose is a 20s/30s dress. I also did an interview with BBC South on the Gardner story that got onto the agencies.

More serious journalists, who actually earn their living through their craft, have also advised me to fight this. I initially said I wouldn't, I thought that it was prudent to keep quite but as the Argus, our local paper, seems to do this kind of thing to me every few months and  various people have contacted me suggesting reasons for Will Gardner's attacks, which may or may not be true but I have come to the conclusion that it is important to make a stand, not so much for myself but because it is really an attack on the Church, my bride, Christ's bride.

Just as involvement with poor is messy so is involvement with media but actually defended that which is true is important, it is the manly thing to do, I was rather heartened by some of the comments Mr Gardner's piece, there are usual crackpots but I am grateful to those who got down into the mess of the forum in order to point out what was wrong with Brighton Argus' Bill Gardner's piece.

It is fine protecting the bride of Christ in the cosiness of the Catholic blogosphere, perhaps the truly manly thing to do is to protect her and fight for honour in the media, 'on the peripheries' as Pope Francis would say.

Oh, the interview is on 6.30 tonight, as I don't have a tv perhaps someone might put a link in the combox, I'll be doing something priestly at that time.

Fight them Father,especially that Silverman bird in the Telegraph,she is a diabolical defamer

Here's the link to the regional news item:

Here you are Fr. BBC South East, 9 minutes and 55 seconds in.

Please be assured of our prayers.

Fr Ray, your thoughtful and heartfelt posting has been mangled and distorted by the sort of journalism that Stanley Baldwin described as, 'Power without responsibility - the privilege of the harlot throughout the ages'.

I will pray for you in your ministry, for the homeless and destitute - and for Mr Gardiner and all journalists.

Bob, I don't think Stanley Baldwin had much to do with harlots; they have neither power nor responsibility. Sir Humphrey in 'Yes, Minister' was more accurate when he observed "Responsibility without power. The prerogative of the eunuch throughout the ages".

I pray someone gives him a good boot up the backside. Just posted a letter to the Argus now, only became aware of the hit piece late today.

Was that a "sorry" from the Bishop?

Sorry that Fr Blake has been so maliciously defamed?

Sorry that Fr Blake's name has been unjustly dragged through the mud in the national press and reported on television?

Sorry that Fr Blake should be put to so much trouble?

Sorry that Fr Blake's words should have been so maliciously reported?

Sorry that Fr Blake's much appreciated work for the poor has been overlooked due to an incompetent or malevolent journalist's report?

What a sorry state of affairs to have a bishop who doesn't back up one of his priests who is labouring conscientiously and devotedly in the vineyard.

God bless you Fr Blake and thank you for all you do.

Absolutely lovely photo of you in the Telegraph, Fr Ray.

These people are too shallow to understand what you meant in your recent thread on the poor. Or they simply don't wish to understand.

Keep up the good work and thank you for your blog.

Exactly totally agree with Cathy's comments at 10.28. Watched the BBC report. Unbelievable. Well, at least Bishop Conry had the black on this time.

We're all supporting and praying for you Fr Ray.

Cathy,
I think Bp Conry said what he thought appropriate. I think he felt the situation needed defusing and was speaking primarily to those who had merely read what was reported in the press.

It would be good if one could be assured that +Kieran was equally loyal to you, and determined that your statements too should be read in the best possible light. (Which any reasonable person would have not the slightest difficulty in doing.)

Fr Ray, I remember reading your post when it was first published, it made me uncomfortable though only in the way that one ought to when forced to reflect on their own approach in such things. The article is certainly a complete distortion from any concept of fact, and if you have not yet had the time it would certainly be worth registering a case with the Press Complaints Commission. It really is outrageous that any alleged journalist or editor should publish such untrue, sensationalist nonsense, especially when anyone could readily understand the message of your post, and still moreso in the context of your comments later on the thread. Please be assured of my prayers.

Wyn, that is what the Gospel impels us to.

I certain my Bishop is equally loyal to me, we live by the same Gospel. However he has wider concern which I respect and you should too.

In fact the "responsibility without power" quotation was first applied to harlots by Kipling (and quoted by Baldwin), and to eunuchs by Tom Stoppard.
http://en.wikiquote.org/wiki/Tom_Stoppard

Surely anyone can complain to the PCC, not just Fr Blake, whom it seems that we all commentators here support strongly?

I don't think it would be helpful to comment on Bp Kieran's words here.

I thought the TV coverage portrayed you in a good light. You dared to put your head above the parapet and challenge the dew-eyed nonsense that often passes for love of the poor. I bet the Argus journalist would run a mile if he was confronted with what Catholic priests see every day. And as for bishops in their gated houses....

When we were HOMELESS in 1943,my Mother,myself & brother & sister were housed by St Mary Magdalen's.We had been traipsing around for three years until we were rescued by Monsignor Wallis.

St Mary Magdalen's is situated in the worst area right on the flight path of drunks & druggies,we are unable to leave the doors open because we have been robbed & plundered so often.

This incident reminds me of Christopher Hitchens criticising Mother Teresa saying that the medical care she gave was rudimentary - which possibly it was. I wondered at the time whether he had whipped out his cheque book or his credit card to ensure that more expensive medical care was provided.

My knowledge of the situation of the homeless is slight and I live in the countryside where even tramps seem to have disappeared. However from what I have seen there are problems and often rather unpleasant problems when trying to help as Father Blake has illustrated. Take for instance the problem of a hostel for the homeless. Inevitably they have to have a strict rule about no drink and no drugs on the premises. So what happens? Well their clients will probably congregate on some nearby doorstep or more likely in the porch of some local church to drink and take drugs. This tests the toleration of residents in the locality of the hostel, who do not like the mess and are sometimes intimidated by these clients. The hostel itself will have to do its best to persuade its clients not to do this and reassure their neighbours that they are doing what they can. Then there are the problems of violence and poor hygiene - it is a tough job trying to deal with all this and I greatly admire Father Blake and others who try and tackle the problem.

Journalists should not indulge in such silly and irresponsible comment as has happened here and try and understand the problems perhaps by volunteering in a hostel for a few days. The police do that kind of volunteering so that they get a better understanding of the problems.

The Argus has an anti-Catholic, secularist, PC, "trendy Brightonian" agenda, and will find any excuse to try and appeal to the masses, for sales. Unfortunately I had to work for them as a reporter for a couple of years. The editor at the time was an irritating little bastard too.

Pity that Mr Gardner couldn't even get the name of the church right. "St. Magdalen's"?

How many of us have walked past a Big Issue seller or a beggar and ignored them? Yes, the poor and needy are trying - that is our test.

"It is the manly thing to do."

What wonderful words to hear from a Catholic priest, Father Blake. History is littered with 'warrior saints'; today people see that as an oxymoron. There's a pacifist strain in the Church that says to be a doormat is to be like Jesus even though Christ did battle with people who twisted His words to use against Him. You're here in the person of Christ, Father, so go to it and refuse to let others distort your words to suit their agenda.