Seminary life can be pretty dull at times, it is relieved by the occasional practical joke, I remember a prank where some wicked seminarians brought a priest mini van up the steps of my seminary and left in the front hall, and then there was the occasion when some ghastly youth wrapped a 'staff only' lavatory in cling film and then removed the light bulb: cruel and puerile!

Today I was speaking to a seminarian who told me he was going to ring up his friends and pretend to be Pope Francis, he did a pretty good, 'Hola! is a Papa Francesco ere, how are you? .... No. no you call me Jorge, eh? We are brothers, eh? ..... Avanti, avanti, No?'

I told him it would be absolutely wicked to telephone his Rector, and sinful to put it on You tube, I was grateful when he assured me he would never put such a conversion on the social media. I felt obliged to inform him that there were probably canonical sanctions for impersonating the Supreme Pontiff. 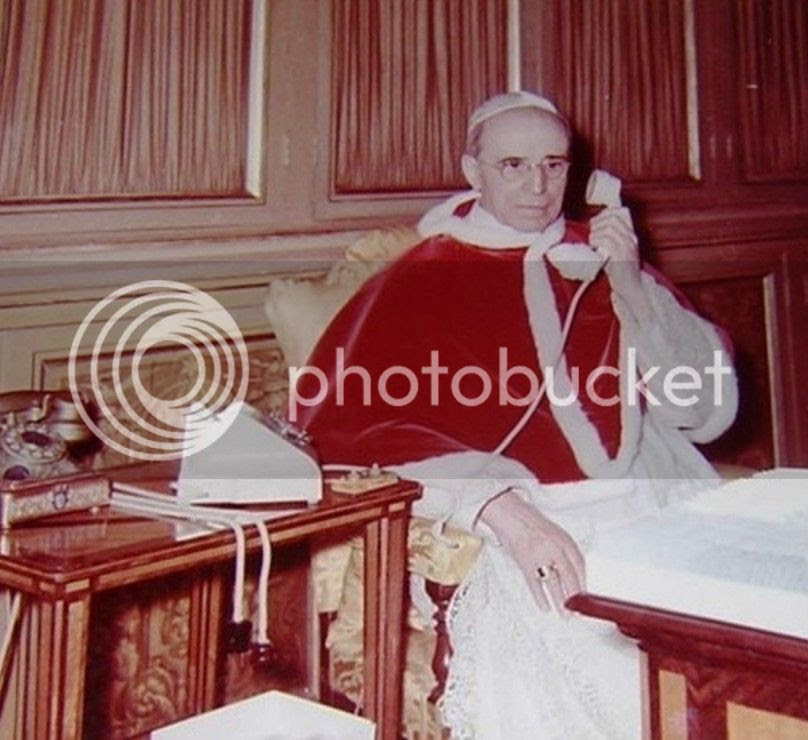 When I hear about these telephone calls from the Pope I can't help wondering (a) if it really was Pope Francis (b) who authorises their leaking, especially as at least one person claimed it wasn't them, and (c) how, if it is the Pope, he manages to convince people he is not some prankster.

I remember being told of a certain Cardinal ringing someone and announcing himself, only to receive the incredulous reply, 'Yeah and I am the monkey's uncle, tell His Eminence that he is a lazy, two faced, double-crossing ....'.

Anyhow, it is a far cry from the days of Pius XI when white ivory telephones were installed in various Vatican so the Pope's gilt telephone could be answered on one's knees.
at September 02, 2013

Supposedly Prince Charles had a problem with someone in Australia after he'd become engaged but not yet married to Lady Diana. He really had to work the hotel operator to convince him/her that he really WAS the Prince of Wales.

And God knows the pope can't call out for pizza to be delivered.

His Holiness appears to be using a British 300 series Bakelite telephone, manufactured by Ericsson for the GPO and in service from 1937 to 1959, when it was replaced by the lightweight 'modern' 700 series. It came in four colours - black, red, green and ivory.