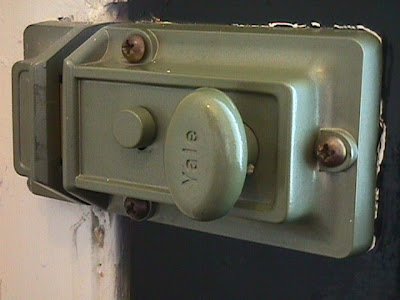 Today's Gospel OF
“Strive to enter through the narrow gate,
for many, I tell you, will attempt to enter
but will not be strong enough.
After the master of the house has arisen and locked the door,
then will you stand outside knocking and saying,
‘Lord, open the door for us.’
He will say to you in reply,
‘I do not know where you are from.’

I have locked myself out of my house from time to time, once I was a curate, the PP was sick, it was too late so I ended up by sleeping in the garden, fortunately I had a gold High Mass set with me, I put it all on, cloth of gold doesn't keep you warm! The other time it cost me a bomb to stay in a hotel.
I always have just a twinge of panic when the door goes click shut.

Perhaps the most often used Gospel illustration of eternal separation from God is the closed door, the being thrown out of the wedding party, outside of the sheepfold. As in the story of the wise and foolish virgins salvation is on offer but it passes, just the same as it is brought to Gallilean or Judean villages for so long as Jesus is there.

The post-Fall state of humanity is separation from God. Jesus alone brings us into Communion with the Father if we enter into Communion with Him, the Church is indeed His Body. Being outside the Church we remain separated from him. At one point the door will be locked either behind us or in our faces. We are either inside at the feast or outside in the cold where there is weeping and gnashing of teeth.

Being locked out, or excluded is the great fear of mankind today.

We have been called and predestined to be conformed into the image of the Son within His Church.

Just wanted to say, Father, that I do so appreciate and benefit from your musings and instruction. They make my day. God bless you!

Well, as one who is locked out really, truly, I appreciated this today.

I think an important point about the door to hell is that it's locked on the inside.

That is the terrifying thing.

Truth, even if it is unsettling is a balm from the 'calm' of 'I'm ok, you're ok.' Why is there a Lamb's Book of Life if some of us don't, without fear and trembling, work our way into eternal death?

I always hear people saying that it is always the person's choice to go to hell. While I can see that would be true, how does it fit with being locked out? People usually say to me, well, hell is locked from the inside. This makes them feel better about hell. (I think they get it from CS Lewis) While it might make them feel better, I don't see how it fits with gospel passages such as this one or the one about the virgins. They seem to lament that they won't get another chance, they aren't just locked up from the inside. They are banging on the door to get in but Jesus won't let them in. Is the Lewis idea of hell being locked from the inside just rubbish? Or perhaps in some cases it could be that way, but in others not?

I think everyone has at one point in their lives lock themselves out of their houses. Even though when it happen it may seem very frustrating and stressful, it's really not a big deal, all you have to do is contact a locksmith.

Thank you again for those wise words of wisdom. They help my wife and I greatly and we really appreciate reading your work. May god bless you and your family. I hope I can use what I have learnt and impact others the same way you have impacted me. Please keep sharing with us we are always willing to read.