There are few sermons I remember, especially from my time in the seminary but one I do remember was preached by the late Dr Frederick Broomfield, a Southwark priest. It began, 'Today many people do not have an orthodox Catholic belief in angels: I tell you that does not bother the angels one bit'. Angels are to men, as a man is to a microbe. Angels are beyond our comprehension, we can understand their actions but not what they are. God is so far above angels that the difference between men and angels is only paper thin.

In modern theology they have little place, in popular piety they are more like fairies than 'the mighty warriors of the Lord'. I rather threw our school by suggesting that rather than little girls with tinsel and gossamer wings appearing in the Nativity play, angels should be boys dressed and armed as soldiers. Angels in scripture are after all always portrayed as male in scripture, even if occasionally they wear 'shining raiment'.

I do not know if it is possible to have the same belief in angels as Jesus did, or even the writers of the first century. The more I think of them, the more muddled I get, even the names of the Archangels are confusing; 'who is like unto God', 'icon of God'. Quite how to understand them gets more confusing especially when trying to understand later writers like Pseudo-Dionysius and Gregory, if you add into the mix the idea that John the Baptist is referred to as the 'Angel' of the desert, and Jesus himself is referred to as an 'angel' or at least 'messenger' in some early writings and many would suggest in the 'supplices' of the ancient Roman Canon it is Jesus that is the High Priest and Angel of the Lord who takes the sacrifice from the earthly to the heavenly altar, who else would be worthy to transport it?

Almighty God, we pray that your angel may take this sacrifice to your altar in heaven. Then, as we receive from this altar the sacred body and blood of your Son, let us be filled with every grace and blessing. [Through Christ our Lord. Amen.] 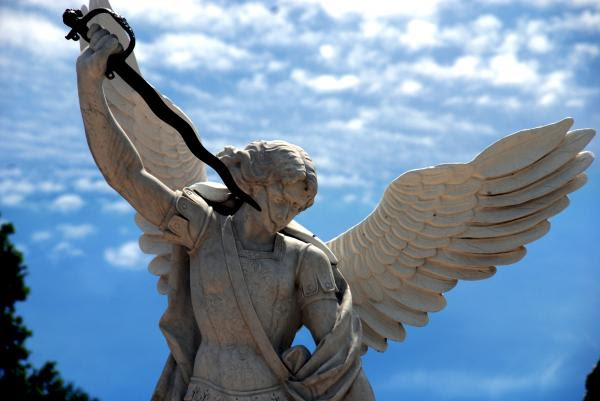 Dear Father, thank you for this interesting post. Have you, I wonder, read any of the work of the Methodist theologian Margaret Barker (most famous I think as the creator of the method of Biblical criticism called "Temple Theology")? She has done numerous detailed studies of how Angels fit in to both Jewish and Christian traditions, particularly in worship. I do believe she touches on the idea of Christ as the Great Angel. She is interesting, too, for the liturgically minded, as she tends to root Christian worship not in the synagogue or house worship of the Jews, but in the Temple: and therefore in what we often call the "vertical" dimension with a de-emphasis on the meal-aspects of the Christian liturgy. I do not, of course, as a Catholic, take it all uncritically, but it is most interesting.

Christopher,
No, Ishall look her up but part of my theology of angels is they incomprehensible.

And when we do Father, along with the hosts of heaven with blessed Seraphim, we can rest assured that our own personal Guardian Angel is joining in with us!

Yes Father, angels are a problem for us – at least as far as understanding them. I am re-reading what St. Thomas says about them in his Summa and frankly I am not much more enlightened (it’s not easy reading…). Some of it is understandable at a theoretical level, while much of it is of the order of: “Who cares about this?”.

For me, I just rely on my Guardian Angel. After reading about Pope JP II and how he dealt with his, I took more of a personal interest in mine (I do think of him as a ‘him’…). I gave him a name and I talk to him every day - asking his protection and thanking him for his past protection. While he doesn’t answer me, I believe he hears me and is always close to me. It’s not a question of ‘feeling’ - rather a conviction that Our Lord said he would be with me and I believe Him.

My mother said that when they were kids they used to sleep on one side of the bed to make room for their guardian angels.

Well, who can say with confidence - 'I've never seen an angel'. How can one be sure? Unless one announces itself. Tobit and Tobias had no idea they were in the presence of the Archangel Raphael till the journey was almost complete. Certainly angels when they are recognised, scare the daylights out of people so glorious and awesome are they, yet as you say, Father, the difference in the glorly of a glimpsed angel on earth compared to the Glory of God ALmighty in Heaven - no wonder St Paul cautioned us to work out our salvation in fear and trembling. Then Our Lady is hailed more honorable than the Cherubim and more glorious beyond compare than the Seraphim and we look to Her for comfort. Have I ever seen an angle - I'm not sure, but I'm pretty sure the pair of red eyes I once saw sailing a couple of feet from the floor in my flat one night a few years ago was probably not an angel. What is a demon? Something that used to be an angel, but I guess that doesn't help us on the 'matter of angels'.

For a quick romp through what Thomas Aquinas wrote about the angels, you could start at:

and carry on from there. This little commentary accompanied our group in York reading through the treatise on the angels recently.

Just a couple of days ago I happened to read what Fr. Dwight Longnecker wrote about his guardian angel. He said that he was aware of someone standing at the foot of his bed and this someone was about seven feet tall. He could not be seen but Fr. Longnecker is convinced that it was his guardian angel and he felt no fear at all about this presence.