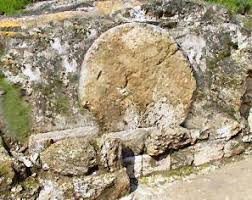 This is really the Good News: today Christ has descended amongst the dead, and death itself has been destroyed, the Just led from captivity to freedom. Mankind has has been reconciled to God, heaven has been opened up to us.

The past has been destroyed, the shackles and chains that held us in the grip of sin have been broken, once slaves and captive, now we are truly free as God has desired. Today God's plan for us has been revealed. Today what has been shown in the Old Covenant in a hidden Mystery is now shown clearly in the one who is the Resurrection and the Life.

An 'Ancient Homily' from the Office of Readings for Holy Saturday


"What is happening? Today there is a great silence over the earth, a great silence, and stillness, a great silence because the King sleeps; the earth was in terror and was still, because God slept in the flesh and raised up those who were sleeping from the ages. God has died in the flesh, and the underworld has trembled.
Truly he goes to seek out our first parent like a lost sheep; he wishes to visit those who sit in darkness and in the shadow of death. He goes to free the prisoner Adam and his fellow-prisoner Eve from their pains, he who is God, and Adam's son.
The Lord goes in to them holding his victorious weapon, his cross. When Adam, the first created man, sees him, he strikes his breast in terror and calls out to all: 'My Lord be with you all.' And Christ in reply says to Adam: ‘And with your spirit.’ And grasping his hand he raises him up, saying: ‘Awake, O sleeper, and arise from the dead, and Christ shall give you light.
‘I am your God, who for your sake became your son, who for you and your descendants now speak and command with authority those in prison: Come forth, and those in darkness: Have light, and those who sleep: Rise.
‘I command you: Awake, sleeper, I have not made you to be held a prisoner in the underworld. Arise from the dead; I am the life of the dead. Arise, O man, work of my hands, arise, you who were fashioned in my image. Rise, let us go hence; for you in me and I in you, together we are one undivided person.
‘For you, I your God became your son; for you, I the Master took on your form; that of slave; for you, I who am above the heavens came on earth and under the earth; for you, man, I became as a man without help, free among the dead; for you, who left a garden, I was handed over to Jews from a garden and crucified in a garden.
‘Look at the spittle on my face, which I received because of you, in order to restore you to that first divine inbreathing at creation. See the blows on my cheeks, which I accepted in order to refashion your distorted form to my own image.
'See the scourging of my back, which I accepted in order to disperse the load of your sins which was laid upon your back. See my hands nailed to the tree for a good purpose, for you, who stretched out your hand to the tree for an evil one.
`I slept on the cross and a sword pierced my side, for you, who slept in paradise and brought forth Eve from your side. My side healed the pain of your side; my sleep will release you from your sleep in Hades; my sword has checked the sword which was turned against you.
‘But arise, let us go hence. The enemy brought you out of the land of paradise; I will reinstate you, no longer in paradise, but on the throne of heaven. I denied you the tree of life, which was a figure, but now I myself am united to you, I who am life. I posted the cherubim to guard you as they would slaves; now I make the cherubim worship you as they would God.
"The cherubim throne has been prepared, the bearers are ready and waiting, the bridal chamber is in order, the food is provided, the everlasting houses and rooms are in readiness; the treasures of good things have been opened; the kingdom of heaven has been prepared before the ages."

Christ descends, splits assunder the created order, trampling the gates of Hell, under his feet are Satan's locks and fetters that have held us captive, he grabs hold of our ancient parents and leads them and all the just from hell, their inglorious prison to the their freely given glory.
This is the reason I find it incongruous, we should join the baying mob crying, 'crucify him' during the Passion, that some might disagree with me, I say this with a smile, indicates how far we fail appreciate what Christ has done for us, and how little the Resurrection, and therefore Grace, really impinges on our theology. Yes, concupiscence, the wounds of sin, exists but in the West we too easily loose sight of what God has made us.

Holy Saturday, today, is very much a dies non. It is not as the Orthodox might term it 'Holy and Great Saturday'. It is interesting that whilst most Catholics simply ignore it, for the Poles who use our Church it the time when even those who are lapsed still turn out in huge numbers for 'food blessing', even the lapsed come, Polish priests complain, 'they come for food blessing but ignore Easter Mass' for two hours there there are short back to back services of blessing. I estimate that with the Church filling and emptying over a thousand people pass through our doors. What the liturgy fails to do 'food blessing' manages to accomplish.

For Poles food blessing, not the Vigil, marks the end of Lent, perhaps that is why here in England Lent seems to fade out and people aren't that certain when to start indulging. I was really disappointed some of my parishioners decided it was after the Liturgy yesterday and went off to the pub opposite the church, someone else told me about her delicious bacon sandwich which she for lunch, I hope I am not moaning just saying how little impact our attempts at teaching have. Food blessing is an interesting vestige of the pre-Pius XII reform of the Easter Vigil which occurred not in the evening of Holy Saturday but early in the morning. Though the pious might have joined the clergy for the solemn Vigil, in which the Church was restored, 'Resurrecting' if you will, most of the faithful would have come to this rite of blessing later in the day, to, in a sense, take Easter home. Before Holy Thursday the Missal calls for fonts etc to be emptied of Holy Water, we pour all of ours into the sacrarium, the Poles keep some or bless some for this blessing of food, presumably that is a vestige too of the old early morning Vigil.

When we eventually come to rewrite, not just the modern Missal but the Rites themselves, perhaps the experts who do it might encourage some connection between the what happens in the Church and what happens the home, the 'domestic church'. I couldn't help noticing yesterday how dated the Intercessions sounded, time capsules from the 1960s!
at April 19, 2014

Thank you for this discerning and encouraging post. Wishing you a holy and happy Easter.

In the Orthodox Church, fasting does not end until the end of Divine Liturgy (in most places, that will be somewhere between 1am and 3am on Sunday morning). It is not unheard of for Orthodox to abstain from all food and drink after the Lamentations Service on Great Friday evening - not something, I hasten to add, that I have the discipline for. Food is blessed at the end of that service - in our church last year there was a mountain of small baskets at the back of the church. There is often a mini-feast immediately after Divine Liturgy, comprising chiefly of chicken or lamb soup, and boiled eggs. Oh, so many boiled eggs.

The Liturgikon also has provision for Divine Liturgy on Great Saturday morning (actually, the Vesperal Divine Liturgy of Pascha, by anticipation), wherein is celebrated the Harrowing of Hell. It is sometimes called "Little Pascha". I have only experienced it once, when I was on holiday in Greece, and I wish it were more widespread. It is a solemn service, but there are little bursts of joy here and there, as if the Church is simply unable to contain itself. A reminder that the Resurrection happened both inside and outwith Time, and its effects reach backward as well as forward.

The blessed food is not there to be scoffed immediately - it is held over for "Święcone", the Blessed Easter Breakfast (festive lunch), on Easter Sunday, which traditionally starts with the sharing of the blessed (hard-boiled) eggs.

An equally ancient Polish custom is keeping watch by the "Holy Sepulchre", the altar where the Bessed Sacrament is reserved, from the conclusion of the Good Friday ceremonies, all through the night and the next day to the start of the "Rezurekcja" Liturgy on Holy Saturday evening. Scouts, Guides, the local Army unit, firemen, police, miners, trades guilds, and of course church guilds, all turn out in uniform with their colours to "stand guard".

Or simply restore the intercessions from the EF. Timeless. Problem solved.

...or just abrogate the thing entire and restore the EF? Now there's a thought.

That "ancient source " reading always brings a tear to my eye.

Do we have to abstain on the Friday of Easter Week or does the Solemnity last the full octave?

VE,
It seems to be disputed, the Octave of Easter is still Easter Day, so that would indicate 'meat', yet by feria sexta I have surfeited so much on suckling lamb, bacon, peacock brains, sausages, larks tongues, terrines foie gras etc so I tend to eat some really good fish, a plate of roasted truffles, or asparagus, something that is entirely non-penitential, though it is surprising how fickle human nature is that even a plate of anchovies or fried sprats looks good at that stage of the party!

Gosh - I hope the Argus dosn't read about your feasting Father (and you forgot the caviar!) I can imagine the headline!

Here in Portugal we have had wonderful services with the Easter Vigil last night and this morning a 7.30a.m. mass which starts with a procession of the Blessed Sacrament round the village with hymns and bells followed by Benediction and then Mass. Next week the Parish has a pilgrimage to Compostella. Not to be outdone the secular civil Parish is organising an outing to Fatima at the end of May heavily subsidised out of the rates. Perhaps Brighton Council might be persuaded to do the same!

Happy Easter, Father, and thank you for all your hard work. Hope you are praying for me and son.

May the Risen Lord bless you in a special way today.