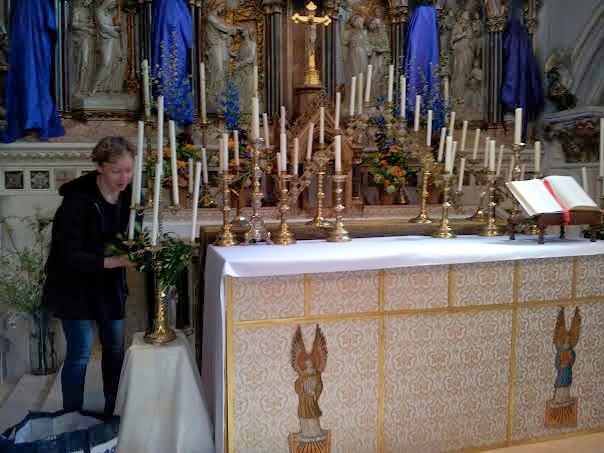 Whilst the Church sleeps Beata who is very talented, like our servers and sacristans and choir puts the finishing touches to the flower arrangements. The veils are of course removed from the statues when the altar candles are lit during the Gloria, for some reason we tend only to be able to get the lights to come on during the Gloria. I know the rubric says the lights should be on during the reading of the seven prophecies but they just don't work then, so we listen to them in the radiance of the Risen Christ. It does seem strange to have the three Lumen Christi's and then turn on the electricity straight away, as they do in Rome. I think there is great symbolism in reading the Old Testament in the light of the risen Christ.
As I say that is what the rubrics seem to say, though of course there is no specific mention of the 'electric light' or for that matter of the 'electric microphone', in the Missal, though there are clear indications that the priest prays at Mass facing the same direction as the people and most priest don't do it, we do here, so from the Gloria on the altar will be a mass of light.

Anyhow while everyone works hard here is a picture of me reading the tablet, we do not allow the magazine of that name in the Church but I love Universalis, quite a few of my parishioners have started saying the Office from it, much cheaper than the paper version, we use it to prepare Mass leaflets too, and the MCs are debating whether it appropriate to use a tablet for the prayers which here are done in the dark, and maybe the 7 prophecies too. 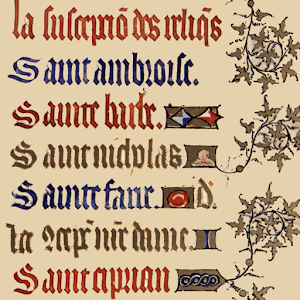 The Floral arrangements are the best ever Father Ray,Beata was working until Midnight on Good Friday

A tablet is somewhat different from "The Tablet". I had a tablet given to me by one of my sons and I have succeeded in downloading the traditional breviary onto it. It is there in both Latin and English and it is free!!!
It is certainly easier to use than the three volumes which printing requires.
If anyone wants it here it is:-
http://divinumofficium.com/cgi-bin/horas/officium.pl
I haven't used it in church but I'm tempted to try. I do use it at home.
I don't particularly like the "Universalis" version probably because I'm used to using the books.
I read somewhere that 30% of all priests use the Internet when it comes to saying Office.

Precisely when the lamps are lit is confused by changes to the rite since 1951. The current practice at the London Oratory is to have the lights come on at the Gloria in Excelsis, which is certainly dramatic, but wouldn't have worked pre-1969 since the Gloria was much later in the liturgy. By the time the 1955 Ordo came in the Vigil had already been moved to the evening and the custom of lighting the Paschal candle, and then all the lamps, during the singing of the Exsultet (which makes sense in an evening service) was unaccountably dropped.