Catholic Sociologist on the Family 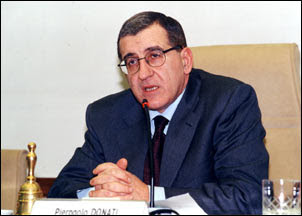 (Zenit.org).- The traditional family cannot be identified with regression while individualism is seen as progress, says an exponent of relational sociology. Pierpaolo Donati, a member of the Pontifical Academy of Social Sciences and a professor at the University of Bologna, spoke at a March 7 conference in Milan on the changes of the family in contemporary Europe. "It is not true that progress coincides with an ever increasing individualization of individuals while the strengthening of social bonds represents a regression," he said. After having analyzed phenomena such as the breakup of the family, demographic decline, lower birthrates, and the increase in divorce and separations, Donati discussed two theses that can help understand these situations. Opposing concepts The first, Donati contended, is that the so-called traditional family -- married couple with children -- will continue to decline and eventually disappear. The professor said that those who propose this current of thought recommend that the family should not take on roles given it in the past. He said that this is because they see the concept of marriage as a restrictive burden. Proponents of this first idea separate sexuality from fertility, and view having children as increasingly risky and burdensome. Donati said the second thesis -- opposed to the first -- sustains that a plurality of types of families reflects negative tendencies that are self-destructive, regressive and socially degrading. The professor added that these tendencies, it is held, give rise to lifestyles incapable of offering satisfactory and stable solutions in relations between sexes and between generations. According to this position, the professor said, society should reduce the variety of possible family behaviors and come to value again certain perennial characteristics -- that of contractual commitment and stability between sexes and generations -- typical of the traditional family. Shared weakness According to Donati, the weakness shared by both theories is in making reference to a "traditional family model that is used as a polemic stereotype, either in the negative sense -- to attack it -- or in the positive sense -- to defend it." "They forget that the term 'traditional family' refers to a 'natural society' founded on conjugal union between a man and a woman," Donati said. She added: "This gives stability, predictability and social grounding to their mutual interchange and their common tasks -- like the procreation and education of children. "One must confront the theme of the plurality of families with an outlook which is broader than mere positivist descriptions or pure extrapolations or historical projections."
at March 22, 2007

All good stuff but I haven't heard any Christian politician commenting on the wickedness of yesterday's soak-the-poor budget, which is helping to force more people out of work, or both parents into work for rubbish pay, or people to get on their bikes to look for work.

These fiscal policies are not confined to Britain but have been adopted my most countries in they world. Though they are distinctly hostile to stable family life, no church commentators seems to acknowledge this and to provide an effective critique from a theological perspective. All we ever get is the wooly "option for the poor".