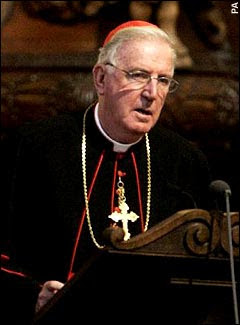 Cardinal Cormac Murphy-O’Connor has delivered the Thirtieth Thomas Corbishley Memorial Lecture on “The Kingdom of God and this World: the Church in Public Life” on Wednesday, 28 March 2007. The full text of the lecture can be downloaded at the bottom of this page.
Key extracts from the lecture
'Speaking as a Catholic Christian, as a Bishop and a Citizen of our great British democracy,' said Cardinal Cormac Murphy-O'Connor, 'I want to appeal for the freedom to believe and the freedom to serve the common good according to the convictions of our faith. For it is in the nature of who we Christians are to serve society, to be recognised by the sign of love, and to discover for ourselves and lead others to discover the inviolable dignity of every human person.'
The secular state
'The secular state, which we now risk adopting in Britain,' continued Cardinal Cormac Murphy-O'Connor 'seeks a politics entirely independent of religion, in which religious principles have nothing to say in the “real” world of political action. The choice of the State to side with the secular is said to be neutrality; and it is usually justified by an appeal to equality. But this is in itself ideology, divorcing religion from the public realm on the pretext that religion is divisive. This sets up great tensions in society. The more determinedly secular a state becomes, the more pressure mounts for religious beliefs to assert themselves. We then no longer have a common search for truth on the basis of shared reason, but a series of monologues in which each side excludes the other. People talk past each other. There is little reasoned thinking. There is no adequate civil discourse. Society is then at risk of the fragmentation of its moral structure.'
The freedom to manifest religious belief in a democracy
'The Church', explained Cardinal Cormac Murphy-O'Connor ' claims only its legitimate part in the political process – to assist the very reasoning which is fundamental to the pursuit of justice. The Church’s task is not to propose technical solutions to questions of governance or economic activity, but to help to form a social culture based on justice, solidarity and truth, for the common good. That is a culture that can form the kind of people who can develop those solutions against a transcendent moral horizon. The Church’s task is of nurturing, to assist a public debate that is tolerant, reasoned and inclusive, but within a moral framework which seeks to defend and promote justice and human flourishing.'
Meeting the challenge
'We Catholics' concluded Cardinal Cormac Murphy-O'Connor, 'and here I am sure I speak, too, for other Christians and all people of faith – do not demand special privileges, but we do claim our rights. We come not to impose, but to serve, according to our beliefs; and to be given the freedom and support to do so, as long as these do not undermine the rights and freedoms of others. I appeal to the good sense and fairness of the British people, and to the traditions which have shaped this great nation. I appeal to the need to keep faith with those traditions, lest we pass into a new intolerance which will over time shake the tree of our democracy free of its spiritual fruit.'
'Those who proclaim Britain as a nation under God must be allowed to continue to work freely for His Kingdom here in Britain. That is our tradition. And I believe it is the tradition which British people wish to maintain. We should now engage in tolerant, reasoned and democratic debate on what is clearly the beginning not the end of this question'.
Full text of Corbishley lecture devliered by Cardinal Cormac Murphy-O'Connor
at March 29, 2007

Too lame, too little, too late.