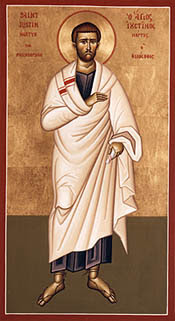 (CWNews.com) - Pope Benedict XVI spoke about the work of St. Justin, the 2nd-century philosopher and martyr, in his regular weekly public audience on March 21.
Speaking to the 25,000 people in St. Peter’s Square for the 88th public audience of his pontificate, the Holy Father recalled that Justin, who was born sometime around 100 AD, was a student of Greek philosophy and an ardent seeker after truth who discovered the Christian faith when a wise old man told him that prayer would open “the doors of light.”
St. Justin taught that Greek philosophers, along with Hebrew prophets, had held the “seeds of truth,” paving the way for the full Christian revelation, the Pope said. His defense of Greek thought, Pope Benedict said, clinched “the ancient Church's decisive option in favor of philosophy, rather than of pagan religion."
This early Christian apologist, the Pope continued, explained that “because Christianity is the historical and personal manifestation of the Logos in its entirety, it follows that everything of beauty that has ever been expressed by anyone belongs to us Christians."
St. Justin rejected the paganism of his age because it “did not follow the paths of Logos but persisted along those of myth,” the Pope told his Wednesday audience. Because it was not respectful of truth, the saint taught, paganism was inevitably “reduced to an artificial agglomeration of ceremonies and conventions.”
The teachings of St. Justin naturally angered the pagan leaders of Rome, and he was put to death under Marcus Aurelius. But his witness remains, Pope Benedict said, as a reminder that the faithful must honor “the truth of existence over the myth of convention.”
That reminder, the Pope concluded, is particularly important in “an age such as our own, marked by relativism.”
at March 21, 2007

So Justin introduces Greek thought into the Tradition at a time before the Canon of Scripture is formed, thus at the very least paving the way for the 4th Gospel to be included and on a broader level giving us the ability to express the natures of Christ in Greek philosophical terms.

See the Pope's Regensburg address for a few other significant reasons.

So what? So plainly of enormous importance. Are there several people called "anonymous" or is this the same person who was so worried about an apostrophe? I only ask.

There seem to be quite a lot of us.