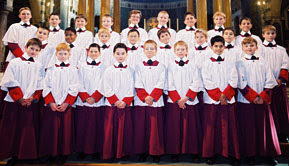 Most of my plans come to nothing but recently I have been thinking about what to do with children at Mass. I hate having flocks of small boys, and girls, around me when I celebrate Mass. I really do think that men should assist at Mass.

So what to do with children?
I want to start a children’s choir.
For years I have been stressing the importance of singing the Mass itself. Partly because I haven’t been able find English settings of the Ordinary (Kyrie, Gloria, Sanctus and Agnus Dei) that either don’t have endless repetitions or are just plain inaccurate translations and because at least half of our congregation have English as a second language, we have been using Missa Simplex and di Angeles. The other reason for preferring Latin is that we are waiting for the "new" translations, and the other other reason is that the Church prefers it.

The Holy Father’s Exhortation stresses the importance of Latin and of the traditional chant of the Church, so we are going to start them young. If it is possible I want to get children singing proper music. I really do think if I were a child and was expected to sing the trivia that many children are expected to sing I would look forward to lapsing as soon as possible. Children and adults need to learn something of the great tradition of Christian music. I have discovered one of our organists, a non-Catholic, is a reasonably competent singing teacher.

I have vague ideas of where to start, Jacque Berthier, the Taize composer has various Kyries, Alleluias in parts, often just simple canons, and even things that can be sung as motets. I want them to learn some chant and to be familiar with basic liturgical Latin (and Greek).
Bleg #1
This is really a “bleg” for any ideas for a simple child friendly repertoire or suggestions for websites or organisations that might be helpful.
Bleg #2
This bleg is for parents in the parish to contact if they have children who might be interested in some serious musical training.
Bleg #3
This bleg is for money to pay for music in this relatively poor parish, our organist has to eat.
This might all come to nothing but it will be an interesting experiment.
at March 28, 2007

What a good idea!
The advantage of a children's choir doing this sought of thing is that adults are far more indulgent of children singing fairly well rather than very well.

Father,
I teach in a boys' school (7 - 13 yrs old). We started a choir for Mass some years go with great sucess. They sing plainsong (Mass XVIII last week) and simple Latin motets. The whole School knows the sung Latin responces for Mass, Benediction hymns etc etc. We stared with little and have built it up gradually. They sing with men for polyphony etc and are actually very good. It all depends on who you get to run it for you! Good luck!

You might not want to publish this comment without (at least) severe pruning but, providentially I saw this at www.farnboroughabbey.org/books.html less than half an hour ago!

The Beginner's Book of Chant
A simple Guide for Parishes, Schools and Communities

Why yet another book on Gregorian Chant? Many books have talked about chant as if it were a dead science. It is a living art form.

The Beginner’s Book of Chant is offered to those parishes, schools and communities who wish to dive head-first into its singing. Using the simplest of the chants in common use it gives practical instruction on reading the traditional notation, methods of interpretation, rehearsal techniques and accompaniment together with a potted history of its development through to the current day.

A "timely" book.
The Catholic Herald

"For plainsong novices, I recommend this book highly."
The Tablet

"For every frustrated choirmaster unable to persuade the choir to look at chant or the chorister who likewise cannot get the choirmaster motivated, The Beginner's Book of Chant may well provide a solution."
AD2000

Mary Berry did a lot of work with children - she found the material in Plainchant for Schools is OK for older juniors upwards so there is no need to look for anything outside the standard Gregorian repertoire to get them started. It is well within children's capability.

I would not want to teach children myself but would be happy to go through some of the points about chant to anyone who did, eg schoolteachers or musicians who did not know about chant. They could come to the Thursday group or I could arrange another time.

Here is a little treasure. It is Sister Mary Antonine Goodchild's Gregorian Chant for Church and School (1941). It's like the fast track to chant, just a few early chapters on the basics and then you plunge right into the repertory, and all the main settings and hymns are here, one by one, in Solesmes-style notation. It has translations. It even has study questions! Fr. Samuel Weber is the one who told me about this. He remembers it fondly. I've thought for a long time that a book like this needs to be written. Well, it's already been done. If I were founding a schola today, or teaching middle school kids chant, this is the book I would use. No question.

Father you can find a link to it on the New Liturgical Movement website ( http://thenewliturgicalmovement.blogspot.com/) along with many other useful resources.

The St. Gregory hymnal is full of latin and English hymns that the children can sing. I've used it myself with childrens groups, and it works very well! Not too expensive either. Make sure you get lots of parents involved, and always have them there as rehearsals as chapparones (or however you spell it!). But don't let them interfere with the musical director. The parents role is to marshall and support, not to become the show. VERY IMPORTANT.