Pope: the Annunciation, Mary’s and the martyrs’ “Yes” 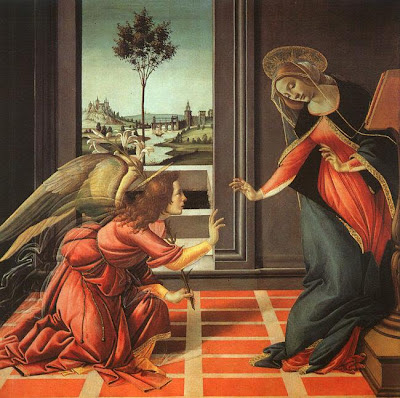 Benedict XVI shows the deep unity between the missionary martyrs giving the gift of life and Christ and the Virgin doing the same, each a supreme act of love to “God and one’s brothers.” Young people are invited to celebrate World Youth Day and join the Pontiff in the penitential liturgy he will preside.
Vatican City (AsiaNews) – Mary’s “Yes” to the Angel’s Annunciation and Christ’s “Yes” to fulfilling His Father’s will find renewal in history in the Saints’ “Yes”, especially that of the Martyrs who are killed because of their faith in the Gospel. In a single glance Benedict XVI joined in this Sunday’s Angelus two celebrations, today’s solemnity of the Annunciation which is observed on March 25, and yesterday’s Day of Prayer for Missionary Martyrs.
Because this year it falls on Lent Sunday, the Annunciation, an ancient festivity celebrated nine months before Christmas, will be observed tomorrow. The Pope decided however to mention “this wonderful mystery of the faith which we contemplate every day during the recitation of the Angelus.”
“The Annunciation is a humble, hidden event that no one saw or knew,” the Pope said, “except for Mary. But at the same time it is a decisive moment in the history of humanity. When the Virgin said ‘Yes’ to the Angel’s Annunciation, Jesus was conceived and with Him began a new era in history, which was eventually sanctioned by the ‘new and eternal covenant.”
“In fact,” the Pontiff said, “Mary’s Yes was the perfect reflection of that by Christ when he came into the world as one can read in the way the Letter to the Hebrews interprets Psalm 39: “Then I said, 'As is written of me in the scroll, Behold, I come to do your will, O God' (Heb 10: 7).”
The Son’s obedience mirrors that of the Mother and thus, thanks to the meeting of these two “Yes”, God was able to take a human form. Since it celebrates a central mystery of Christ, His incarnation, the Annunciation is also a Christological event.”
”Mary’s response to the Angel continues in the Church, which has been called to make Christ present in history, making itself available so that God may continue to visit humanity with His Mercy.”
In order to stress the Saints’ and Martyrs’ “Yes,” the Pope mentioned the Day of Prayer and Fasting for missionary martyrs, which was commemorated yesterday, the anniversary of the murder of Mgr Oscar Romero, archbishop of San Salvador.
Remembering “bishops, priests, men and women religious and laity struck down in their mission of evangelisation and human promotion,” the Pontiff stressed that “the missionary martyrs . . . are the ‘hope of the world,’ because they bear witness that Christ’s love is stronger than violence and hatred. They did not seek martyrdom, but were ready to give their lives in order to remain faithful to the Gospel. Christian martyrdom can be justified only as a supreme act of love towards God and one’s brothers.”
Finally, the Pope noted that “in this time of Lent, more frequently do we contemplate Our Lady who on Calvary seals the “Yes” she pronounced in Nazareth. United with Jesus, Witness of the Father’s love, Mary experienced the martyrdom of the soul. We invoke with confidence her intercession that the Church, faithful in its mission, may bear courageous witness to God’s love before the whole world.”
at March 25, 2007