I am rather keen on the church-home link, people should take things home from Church, St Paul seems to have started it, Acts 19.12 says, "...so that even handkerchiefs or aprons were brought from his body to the sick, and the diseases left them and the evil spirits went out of them." My own theory is that "things" were very important to the early Christians, I am personally convinced the fact that Gospels make explicit mention of the shroud and sudarium, is that they were kept by the early Church. Relics, holy objects, holy places were and are important in a faith that believed "the Word became flesh". The account of the death of Polycarp, the disciple of St John recalls how members of the Church came to mop up his blood with cloths. Again the care of the bodies of dead Christians, especially of the Apostles Peter and Paul, is significant. 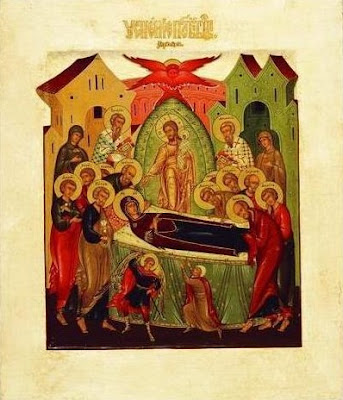 One of the "proofs" of the Assumption is the absence of relics of her, her empty tomb.
Baroque painters loved to picture the Mother of God floating up to Heaven but the classical doctrine of East and West is simply that "she was taken" by Christ, to be with him, where he is. The dogma tells us she was taken up body and soul, which does not necessarily mean this happened at the same time, indeed the legend tells us that she "fell asleep" surrounded by the Apostles and was entombed, and only when her tomb was opened did the Church begin to understand that she had been Assumed into Heaven.

The important thing is that the Assumption takes place in secret and in silence, there were no witnesses, only the devout pondering on the mysteries of sin, death, the Incarnation, the role of Mary and her son's relationship with her, as well as the experience of Mary in the Church's life and the lives of the faithful.

Last night after the traditional Mass we blessed herbs, especially medicinal ones and flowers, according to ancient tradition - we should have had fruit but no-one brought any - the Assumption or Dormition, "the little Easter of summer" is Catholic "harvest festival", the prayers of the old rite lead us to see the Assumption as a presentation to God of the "first fruits" of Christ's harvest, and therefore the coming harvest as being a foretaste of the time when Christ will come and gather the good wheat into his harvest, Mary is the first sheaf cut from the coming harvest. Rather than tins of baked beans the theme is really about health-giving herbs, an image of Mary;  the "Salve", the health of the sick, and an image of the Church too, those healing leaves that grow where the waters of baptism flow.

Bringing to the church and taking home the blessed first fruits of the harvest reminds us of Mary's Assumption and that one day we with her, our hope, we will be "safely gathered in", as the old Protestant hymn says.
at August 16, 2012

Interestingly, the Orthodox tradition is to bless the first fruits of the harvest on the Feast of the Transfiguration, a week earlier.

Yes, there is also the tradition of blessing "first grapes" at Lawrencemas.

Nice item -- in the Eastern Rite, it is the custom to bring flowers to be blessed.