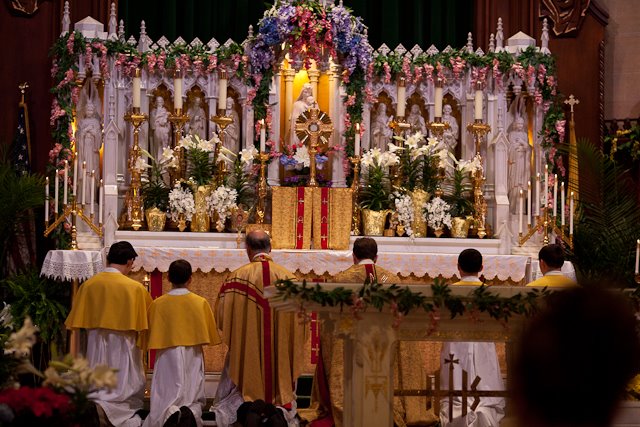 The Assumption Grotto in the US has removed its forward facing altar, so all Masses are now celebrated facing East. The Rector writes:


When I carefully studied the book The Spirit of the Liturgy by then-Cardinal Ratzinger (now Pope Benedict XVI), I realized that we ought to be facing East once again and not towards the people since that position inadvertently created a “closed circle” that did not aim towards heaven, towards God (East), but towards man (symbolically indicating that man and not God was the focal point of the Mass). In the early years of my pastorship here, the low altar was used variously: first, facing the people; then facing East; and then, with a move of the altar farther back some feet towards the main altar, with the priest still facing East. We were getting progressively more in line with an ideal.

Over time I began to think it foolish for us to use the low altar while neglecting the church’s original. In addition, there was a problem having two altars. There ought to be only one altar prominent (main) in a church, not two. Moreover, for the celebration of the Tridentine Mass (now once again available to us), the low altar kept getting in our liturgical way.

Fine, you may say, but what is to be done should a visiting priest want to celebrate Mass facing the people? We have already provided for that in having readily available an altar that can be set in place in a matter of minutes. It too is suitably made, containing an true altar stone and thus worthy of Holy Mass.

It makes sense, there was apparently talk, there is always talk of course, in the CDW of issuing a statement/decree about the unicity of altars, only having one, on a sanctuary or in a side chapel. It was really designed to promote the use of original High Altars and promote eastward or apsidum facing Mass. The idea was dropped because of course it would have meant more destruction and most probably of the old altar rather than its johnny-come-lately sanctuary-mate. However having two altars, one in front of another, on a sanctuary is just a destructive sign of "the altar" which is the sign of Christ, the Rock.

The problem with anyone who has read Ratzinger on the liturgy, and takes him seriously, a has serious problems with not facing East. A few brave souls have actually started to celebrate this way, I have most of the Masses celebrated here face east, people asked for it after we had the sanctuary floor up for a month and it was impossible to say Mass facing the people, but I think most other clergy, those who have not read modern liturgical authors tend to regard it as more than eccentric. Most bishops would regard it as totally bizarre, and be suspicious of priests who celebrate Mass this way, indeed I suspect that Fr Perrone's "wheel on" altar is really for visiting bishops. The truth is that facing either direction is a free choice for any priest, in the Ordinary Form, it is as much an option as the choice of Eucharistic Prayer or Penitential Rite. It isn't like the choice between using the Introit or substituting a hymn where the preference should always be for the appropriate liturgical text.

I have been hunting on the net for the CDW response to an American who wanted to forbid priests in his diocese from celebrating Mass facing "ad apsidum" and was told he could not.

I am greatly privileged in my university chaplaincy to be able to offer all Masses facing East; in fact it's quite a jolt for me if and when I do supply work in parishes. I think if we really believe in the "meaningfulness" of symbolism, ritual, posture and gesture in the Mass, then the great richness and catechetical value of celebrating ad orientem needs serious consideration. I would encourage priests to take the plunge - how about one Sunday Mass once a month as a start, just to introduce it to people?

This was the best we could find for the FIUV Position Paper on Liturgical Orientation, on the current authoritative recommendations:

‘Cases must be considered in which the sanctuary does not allow for the placing of an altar facing the people or in which it would not be possible to maintain the existing altar with its ornamentation intact and at the same time install a forward-facing altar that could be seen as the principal altar. In such cases it is more faithful to the nature of the liturgy to celebrate at the existing altar, back to the people, than to maintain two altars at the same sanctuary. The principle of there being only one altar is theologically more important than the practice of celebrating facing the people.’ Notitiae 29 (1993) 249 (Editorial)

Not really connected with this post but....Solesmes Gregorian Missal now available with new English translation. Now there's no excuse for not using the Gradual in the OF. Sorry if this is old news. My copy just arrived from France.

All Masses have been celebrated ad orientem at Assumption Grotto since I've got there in 2005, with the exception of a few bishops who still used the low altar.

The real news was that after years of this, Fr. Perrone finally found a good home for the table altar that was installed in 1978. He now has a portable for that yearly visit of a bishop who may want to use it (he doesn't want to force any priest or bishop to use the high altar). However, some bishops have been using the high altar, as well (Archbishop Vigneron celebrated his first Assumption Day as archbishop in a Latin Novus Ordo at our high altar in 2009).

My post features an iPhone pic of how it looks now without the low altar.

I know this will not be well received on this website, but what has happened to the noble simplicity of the Roman Rite? This altar looks like something out of an over crowded florist shop. I have offered the EF 'ad orientem' (Low Mass only). I know that the OF has oft times been poorly performed. But there is something about the OF that expresses more clearly the connection of the Mass we are offering with that of the Lord's Last Supper. Hence I try to preside "in persona christi", as reverently as I imagine He did.

Fr Ronan,
I quite agree with you it is over the top. If you Diane's picture the absence of the second altar gives the sanctuary a much more "relaxed" appearance.
One of the problems in my picture is I think, apart from the floristry, an absence of space around the altar, getting rid of the extra altar will presumably those on the sanctuary to spread out a bit.