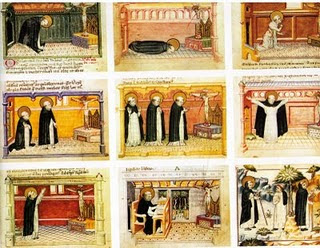 In his catechetical series on prayer Pope Benedict spoke today about St Dominic, the man who was "either speaking to God or speaking about him". I find something stifling about later "methods" of prayer, the Carmelite or Ignatian methods for example. It is interesting that the Carthusians, founded a century before Dominic gave no place for "mental prayer", just the Office and Lectio Divina, thi reflect the ancient practice of   "just get on with it", do it, don't worry how. Dominic seems to be saying everything should be done prayerfully.
It is significant that Pope notes "the importance of external attitudes in our prayers".

Dominic seems merely to want to enthuse the whole of life with prayer.


In the founder of the Dominicans, "we can see an example of harmonious integration of contemplation of the divine mysteries and apostolic activity." It was said of him the he always "spoke with God or of God." "This observation indicates his deep communion with the Lord and at the same time, the continued commitment to lead others to this communion with God."

Although he did not leave writings on prayer, "the Dominican tradition collected and handed down his living experience in a work entitled: the Nine Ways of Prayer". " which "helps us understand something of the inner life of the saint, helps us to learn something about how to pray".

Each of these nine ways of praying is done "always in front of Jesus Crucified," with " a corporal and spiritual attitude, that intimately interpenetrating, favor recollection and fervor. The first seven ways follow an ascending line, like the steps of a journey, towards an intimate communion with God, with the Trinity: St. Dominic prayed standing, bowing to express humility, lying prostrate on the ground to ask forgiveness for his sins, on his knees in penance to participate in the sufferings of the Lord, with his arms open staring at the crucifix to contemplate the Supreme Love, with his gaze directed towards the heavens feeling himself drawn towards the world of God."

The Pope stressed that the last two ways " correspond to two forms of piety that the Saint normally practiced. First, personal meditation, where prayer acquires a more intimate, fervent and soothing dimension." After the Liturgy of the Hours or Mass, " St. Dominic prolonged his conversation with God, without any time limits. He would sit in an attitude of quite recollection and listening, reading a book or staring at the Crucifix. He lived these moments of his relationship with God so intensely that his reactions of joy or tears were outwardly perceptible. " " Witnesses say that at times he would go into a sort of ecstasy, his face transfigured, but immediately afterwards he would humbly resume his daily activities recharged by the power that comes from on High.." Then prayer while travelling between one monastery or another, he would recite Lauds, Sext, Vespers with companions, and, crossing the valleys and hills, contemplate the beauty of creation. At such times a hymn of praise and thanksgiving to God for so many gifts would gush from his heart, especially for the greatest wonder of all: the redemption accomplished by Christ. "
................
This saint reminds us of the importance of external attitudes in our prayers. That to kneel, to stand before the Lord, to fix our gaze on the Crucifix, to pause and gather ourselves in silence, is not a secondary act, but helps to us to place ourselves, our whole person, in relation to God. Once again, I would like draw attention to the need to find moments to pray quietly everyday for our spiritual life"

As Dominicans have ironically said, if one of the novices or students behaved like this, he'd probably be thrown out!

Jokes aside, it is said that the only thing more difficult than being a saint is living with one: good St Dominic not only never had his own cell in any priory, since he spent every night weeping and praying aloud before the altars in the church, occasionally napping on the footpace, but prayed so loud he oft woke his slumbering brethren.

Yes, his older, more authentic because more early Christian form of prayer, bound up with bodily posture, is an excellent example to all. Bow before the Crucifix; bow in honour of the Trinity... don't lounge lazily at Mass and Office.

It reminds me also of a Franciscan tale: two lazy friars were sitting with crossed legs as they read the office, when a devil appeared, gave forth a terrible stench, and vanished, laughing that "This is the incense that suits your prayer!"