Loss of Trust: the fruit of Modernism 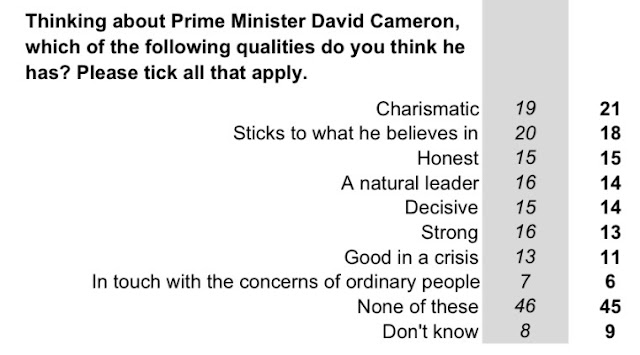 Today is the memoria of St Pius X the great warrior against Modernism.

An interesting poll on Cramer's blog shows only 6% of people believe David Cameron is "in touch with the concerns of ordinary people". There are lies, damned lies and statistics, and polls are obviously rather imprecise gauges of public opinion.
Modern man is sceptical, he has been taught not to believe, he has been educated to discount other people's "orthodoxies", he is essentially a "relativist" it applies to religion, which for the non-religious is fine but actually this relativism applies across the board. One of the meanings of the word "religion" re-ligere is "to bind together", our scepticism breaks down the bonds that should bind us and our society together. One of the great problems with politicians today is that no one is really interested in what they have to say, apart from "equalities legislation" there is no big political idea today, governments today are voted "out" but never voted "in". Politicians are amongst the least trusted members of our society and the world of politics seems to have degenerated into a world of its own, apart from supplying us with soapbox scandals, it as unrelated to everyday life as the most obscure parts of obscure theology.

This Relativism is as really about a breakdown of trust, it is the social dimension of Modernism, it is part of a world view that says it is impossible to "believe in" or to trust any belief system, religious or political. It attacks every part of society that depends on trust from the family and friendship to banking. Pius X's attempts to curb those who denied that God could be trusted, that there is in objective Truth was the first prophetic attempt to defend us from a cancer which has taken hold of modern culture. We have moved from a world in which City bankers would rejoice in "My word is my bond" and where honour and integrity were expected to  a world were lies and double dealing are expected.

The loss of trust within our society, since the time of Pius X has affected how we relate not to just to institutions but to one another.
at August 21, 2012

58. Truth is no more immutable than man himself, since it evolved with him, in him, and through him.

63. The Church shows that she is incapable of effectively maintaining evangelical ethics since she obstinately clings to immutable doctrines which cannot be reconciled with modern progress.

Rejecting these propositions would seem to be the bare minimum required in order for the Church to be more than a political party or a social club. But they haven't gone away, have they?

It has become axiomatic here in the US that one does not vote ‘for’ an acceptable candidate, but rather ‘against’ a worse candidate. We seldom have a candidate that people can really get behind and support. We choose one in order to avoid the alternative because we only have a choice of one or the other.

For some time I have been of the view that there are few, if any, honest people in politics. Yes, many talk a good game (cfr. Obama in 2008) but the reality is that they are in hock to the Party System. Buck the party and you are on your own and - despite the best will in the world – you will not achieve anything.

This is a far cry from our Founding Fathers who felt an obligation to serve a term or two for the public good and then went home to carry on their ‘real lives’. The politicians of today have a sense of entitlement - that they deserve to be re-elected again and again. And their motivation is not the public good, but their private ambition and the perks that attend thereto.

And they will do anything, say anything or support anything that helps to keep them in office – honesty and integrity be damned!

This issue is dealt with in the first few chapters of Plato's Republic. One problem throughout is that the people who become politicians are the ones who are least suitable for the task, due to the process by which they become politicians.

There seems to be slightly more trust in government and politicians in Sweden. There is a different history, the country is smaller and the institutional structures are different.