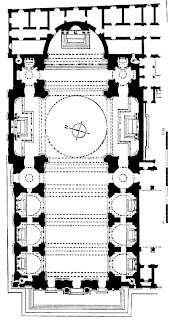 By Elizabeth Lev - Zenit
Benedict XVI's long-awaited apostolic letter "Summorum Pontificum" on the use of the missal promulgated by John XXIII finally came out this month to a myriad of reactions and commentary. Some have been offering Masses of thanksgiving since July 7, the day the letter was released, some have been openly critical, and others think that really not much will change.

In this document, the Holy Father decreed that any Roman Catholic priest is permitted to celebrate Tridentine Mass. Parishioners may request Masses celebrated in the "old" form.

Last week, on the anniversary of the apostolic constitution "Quo Primum," issued July 14, 1570, as a papal bull by Pius V, it struck me how many of Rome's astounding churches were built after the codification of the Tridentine Mass.

In this light, the return of the older form of the liturgy can help to understand and appreciate the grandeur of these churches.

In the wake of the Council of Trent, 50 new churches were built in Rome. But the one that best represents the Tridentine age is the Gesù built from 1568-1584.

Fruit of the collaboration between the newly-formed Jesuit order and Cardinal Alexander Farnese, the Gesù embodies St. Charles Borromeo's prescriptions for sacred edifices to showcase the new spirit of the liturgy.

One of the primary concerns was acoustics, as the solemn Masses were completely sung and the sound of the chants was meant to fill the church. Trent's decision to retain Latin as the sole language of liturgical prayer underscored the universality of the Mass in a world of ever-expanding horizons. The rites in Asia, America, Europe and Africa used the same language as Rome and linked the most far-flung areas to the See of Peter.

Sound also mattered because preaching became more important during this period. The Jesuits were instrumental in introducing greater emphasis on homilies and in the huge nave of the Gesù, there was space for hundreds to gather around the pulpit to hear their stirring preachers. 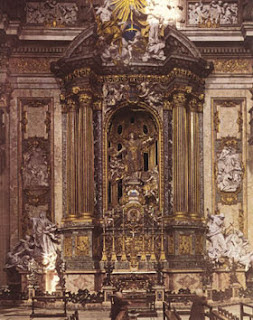 Rood screens, which separated the presbytery from the nave, were removed after Trent, to allow the congregation to see the altar and liturgy more clearly. The altar was raised up on steps and the sanctuary defined by a low rail. The faithful were awed to see the majesty of the Mass; the priest, deacon and sub deacon lined up at the altar, the clouds of incense sweetening the air and the elaborate marble tabernacle nestled in the apse. For the Rome of 1585, the Gesù was a revolutionary structure while still respecting the tradition of the early Christian Church.

The liturgy and the Church worked together to emphasize the re-presentation of the sacrifice of Christ. At the altar, placed against the wall, the celebrant recited the Eucharistic prayer in silence. From the nave, the faithful saw the priest's numerous gestures; 27 signs of the cross, five genuflections and most significantly, the raising of the Host amid incense and ringing bells.

The altar was a block of stone, resembling a tomb or sepulcher, vividly reminding the flock of Christ's death and burial. In the Gesù, Giovanni Battista Gaulli frescoed the initials of the Latin translation of Holy Name of Jesus -- "IHS" -- in a burst of light above the altar. This glorious image helped the people to understand Christ's triumph over sin and death.

You must know the old saw: "There is nothing so lost as a Jesuit at Solemn High Mass". Besides, most of the preachers before and after Trent were from the Mendiant Orders: ofm, op, ocarm, augustinians, etc. For this work the Jesuits were late comers. However they were the backbone of the Counter Reformation style/effort in the Church.

"In the wake of the Council of Trent, 50 new churches were built in Rome".
And very lovely they are.
But just look at the rubbish built in the wake of Vatican II ...

This is a nice article, though. It's tone as much as its subject matter speaks volumes about the beautiful spirit of re-connection blowing through the Church. Our past has been restored to us as the greater part of the present, and we can speak of it naturally, openly and familiarly without embarrassment, bitterness or qualification. A kind of artificiality and awkwardness has suddenly been dispersed.

What has this post to do with the General Instruction on the Roman Missal? Isn't that the most authoritative source of reference on th planning of churches emanating from the Holy See?

This can be said of nearly all Catholic churches built before 1970.

And as I understand it, it was never the intention of Vatican 2 that the priest should say Mass with his back to the Lord, it is just something that happened because seemed a good idea at the time.

Hopefully, there will be a move for re-ordering, but what a waste of money to have to put right the damage done in the last forty years.

Fr. Paul,
Well, none at all, I would have thought.
After the Reformation, all churches belonged to the state.
And Henry VIII was not a man who reacted well to criticism.
Look what happened to the Pilgrimage of Grace in 1536 ...