Filoque and Hunwicke: bits of the Patrimony 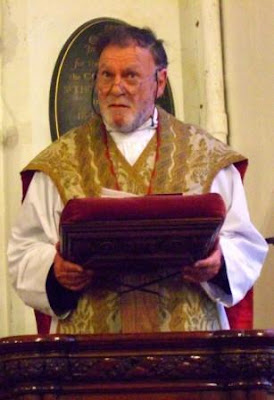 Someone in the comments of the previous post suggested looking at Fr Hunwicke's blog as an example of Anglican Patrimony. I enjoy his blog; slightly curmudgeonly, often mischievously anti-establishment, always scholarly and invariably informative. I look forward to the day when I can welcome him, and many like him, here to St Mary Magdalen as a brother Catholic priest.


Today he quotes Edward Siecienski's new book on the Filioque writing on the Council of Hatfield which spoke of  'the Holy Spirit, ineffably proceeding from the Father and the Son, as proclaimed by all whom we have mentioned above, holy apostles, and prophets, and doctors.'
Like the Feast of the Holy Trinity there is the suggestion the Filioque clause of the creed had an English origin.

"The two questions raised by this confession of faith were how Theodore would have interpreted this teaching, and how long the filioque had been part of the creed in England. While it is possible that Augustine of Canterbury (d609) might have taught the filioque during his mission to England (given his connection with Pope Gregory I), there is also a chance that it was introduced by Theodore's companion Hadrian, an African by birth whose study of Augustine and Fulgentius would likely have included their teaching on the procession. As for Theodore himself, it is possible that he understood the filioque in accordance with the principles Maximus had enunciated years earlier in the Letter to Marinus, especially if (as is likely) the two knew each other in Rome. What is clear is that Pope Agatho, although busy preparing his own statement of faith for the Constantinopolitans (without the filioque), happily received the proceedings of Hatfield, including its confession in the procession of the Holy Spirit from both the Father and the Son."

In typical Hunwickian style he ends by saying:


I wonder how those 'English Orthodox' and 'British Orthodox' who tell us that the Anglo-Saxon Church was "Orthodox", deal with the little matter of Hatfield.

Fr Hunwicke's blog is far superior to most Roman ones...

As for the orthodoxy of the Saxon Church, the Orthodox often accuse the Normans of bringing heterodoxy with them - which makes me wonder why so many have a thing for the Sarum Use, which the Normans also brought with them. I think this is a stinking red herring though - you only have to read St Bede's Ecclesiastical History to dash the very idea of a supposed Saxon orthodoxy curtailed by the Normans. The general thrust of that great work is the conflict between the Roman Church and the Celtic church over the date of Easter - so methinks that the Church of Anglo-Saxon England was not so cut off from Roman influence as some Orthodox like to think...

So the 'English Orthodox' reckon that the Anglo-Saxon church was Orthodox? Here in Scotland the Calvinists would have us believe that Celtic Christians were some species of proto-Presbyterian. Preposterous, I know, but it just goes to show that some people, despite any evidence to the contrary, will twist history to suit their particular world-view.

A touch of realism can be found at this link. Do not get excited about any of these gymnastics.

I did hear that the original "Roman" church in Britain (ie the Church during the period of Roman occupation) was fairly coptic in character - which might account for the arguments about dating Easter at Whitby.

So if the saxons had not invaded when the Romans left we might all be Coptic or uniate Coptic?

Or is this nonsense.

What a lot of nonsense!

Acolyte4236's modest observations are among the few sensible comments I've read, there or here.

Crux (sigh)... of course the Anglo Saxon Church was Orthodox. It was evangelised by an Orthodox missionary dispatched by an Orthodox Pope of Orthodox Rome. What this has to do with Presbyterian fantasies, I have no idea. Presbyterians, like all Protestants, are the wayward children of non-Orthodox Rome; perhaps in their starved imaginations they're favourably disposed towards the "Celtic Church" because whatever else it might have been, it certainly wasn't "Roman Catholic".

Patricius - the Synod of Whitby precedes the Frankish ascendancy in the Western Church, and its subsequent dogmatisation of the "double procession", by a century and a half - so what's your point? No Orthodox I have met, read or spoken with has ever proposed that England, re-evangelised by Roman missionaries and established as two provinces of the Western Patriarchate, was ever therafter, until the sixteenth century, "cut off" from "Roman influence". Neither have I ever met an Orthodox remotely interested in the Sarum rite. I'll bet that no more than a handful of converts in my parish have even heard of it. I have never been party to a conversation about the Sarum rite anywhere other than on your blog.

I'm not going to rehearse the theological debate. It's way above my pay grade. I'd simply observe that, even within the Latin understanding of "development" and its criteria for distinguishing the authentic from the corrupt (pace Newman), the filioque falls at the first hurdle.

I cannot see what events in the Church during the sixth century or thereabouts have to do with "Anglican patrimony" since they clearly predated Anglicanism by a millenium.

The filioque discussion that has gone on for the last millenium or so is quite fascinating.

It still amazes me how disagreement on what seems to me the religious equivalent of the leg before wicket rule could lead to schism.

Well, Patricius the Second - since the Protestants are "the wayward children of Rome", inevitably "the Patrimony" is a common one; particularly insofar as Protestantism in its various forms involves grasping the solecisms of Blessed Augustine and running off a cliff with them.

It always astonishes me that any "Orthodox" can have the hide to claim that they ever came near Britain before the previous century.
As I understand it, the Celtic church largely sat on their hands until Augustine came from Rome and set about evangelising England and then the Celts came out of the woodwork and discovered that their date for Easter didn't match the Pope's date. So, they had to fall in line!

JA Ray: The Celtic church sat on their hands? What on earth are you on about? So Columba, Eunan, Aidan, Cuthbert et al were all doing nothing until Augustine came along. As we say in this part of the world: Aye, right.

@Moretben: trust you to get a "Catholics are really Protestants" dig in!

Dear Father: a bit late, but you may be interested in what Eamon Duffy has to say about the Anglican patrimony link inside a comment:here.