Statement on the Implementation of the Apostolic Constitution Anglicanorum Coetibus: The Establishment of a Personal Ordinariate in England and Wales 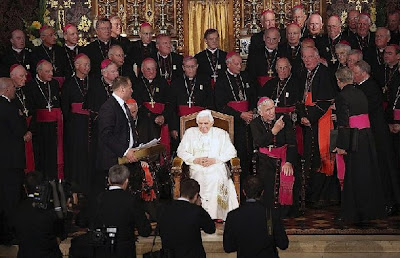 From the Bishops' Conference of England and Wales
Much has been achieved over many years as a result of the dialogue and the fruitful ecumenical relations which have developed between the Catholic Church and the Anglican Communion. Obedient to the prayer of the Lord Jesus Christ to His Heavenly Father, the unity of the Church remains a constant desire in the vision and life of Anglicans and Catholics. The prayer for Christian Unity is the prayer for the gift of full communion with each other. We must never tire of praying and working for this goal.

During his visit to the United Kingdom in September, His Holiness Pope Benedict XVI was therefore keen to stress that the Apostolic Constitution Anglicanorum Coetibus: “…should be seen as a prophetic gesture that can contribute positively to the developing relations between Anglicans and Catholics. It helps us to set our sights on the ultimate goal of all ecumenical activity: the restoration of full ecclesial communion in the context of which the mutual exchange of gifts from our respective spiritual patrimonies serves as an enrichment to us all.”

It is now just over one year since the Apostolic Constitution was published. The Pope’s initiative provided for the establishment of personal Ordinariates as one of the ways in which members of the Anglican tradition may seek to enter into full communion with the Catholic Church. As the Holy Father stated at that time, he was responding to petitions received “repeatedly and insistently”ii by him from groups of Anglicans wishing “to be received into full communion individually as well as corporately.”iii Since then, it has become clear that a number of Anglican clergy and their faithful do indeed wish to bring their desire for full ecclesial communion with the Catholic Church to realisation within an Ordinariate structure.

In collaboration with the Congregation for the Doctrine of the Faith (CDF) in Rome, the Bishops of England and Wales have been preparing for the establishment of an Ordinariate early in January 2011. Although there may be practical difficulties in the months ahead, the Bishops are working to address these at a national and local level.

Five Anglican Bishops who currently intend to enter the Ordinariate have already announced their decision to resign from pastoral ministry in the Church of England with effect from 31 December 2010. They will enter into full communion with the Catholic Church early in January 2011. During the same month, it is expected that the Decree establishing the Ordinariate will be issued and the name of the Ordinary to be appointed announced. Soon afterwards, those non-retired former Anglican Bishops whose petitions to be ordained are accepted by the CDF, will be ordained to the Catholic Diaconate and Priesthood for service in the Ordinariate.

Before the beginning of Lent, those Anglican clergy with groups of faithful who have decided to enter the Ordinariate will then begin a period of intense formation for ordination as Catholic priests.

At the beginning of Lent, the groups of faithful together with their pastors will be enrolled as candidates for the Ordinariate. Then, at a date to be agreed between the Ordinary and the local diocesan Bishop, they will be received into the Catholic Church and confirmed. This will probably take place either during Holy Week, at the Mass of the Lord’s Supper on Holy Thursday or during the Easter Vigil. The period of formation for the faithful and their pastors will continue to Pentecost. Until then, these communities will be cared for sacramentally by local clergy as arranged by the diocesan Bishop and the Ordinary.

Around Pentecost, those former Anglican priests whose petitions for ordination have been accepted by the CDF will be ordained to the Catholic Priesthood. Ordination to the Diaconate will precede this at some point during Eastertide. Formation in Catholic theology and pastoral practice will continue for an appropriate amount of time after ordination.

In responding generously and offering a warm welcome to those seeking full ecclesial communion with the Catholic Church within the Ordinariate, the Bishops know that the clergy and faithful who are on that journey of faith will bring their own spiritual treasures which will further enrich the spiritual life of the Catholic Church in England and Wales. The Bishops will do all they can to ensure that there is effective and close collaboration with the Ordinariate both at diocesan and parish levels.

Finally, with the blessings and encouragement they have received from Pope Benedict’s recent Visit, the Catholic Bishops of England and Wales are resolved to continue their dialogue with other Christian Churches and Ecclesial Communities on that journey towards the communion in faith and the fullness of unity for which Christ prayed.
at November 19, 2010