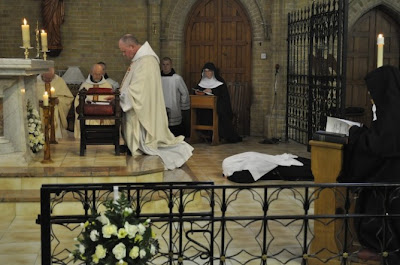 St Cecilia's on the Isle of Wight have just had another Solemn Profession, ﻿Sister Margaret Ross.
Congratulations! According to the Catholic Herald there are a few more on their way.

Sister Elizabeth Burgess, who looks forward to her Solemn Profession next year, Sister Mary Thomas Brown who made her First Profession on October 18 this year, Clara Beards, who entered the Abbey as a postulant in September, and Sister Marie-Therese Dempsey, who received the habit earlier in the year on July 9.

I understand the monks of Ramsgate are still negotiating to take over the Franciscan Friary at Chilworth.
at November 26, 2010

Thank you for this good news, and also about the interesting news about Ramsgate. Chilworth Friary is beautiful.

It is also good to see the abbot of Farnborough at Ryde.