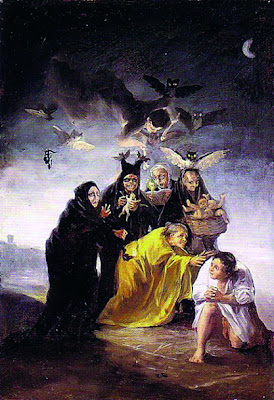 There are various reports about the poor priest who was beaten up in Italy for celebrating Mass in the Extra-ordinary Form. Fr Z reports that he received a message saying, “You have been tough, but we will smash your head. Signed, Your friend Satan”.

Apparently one of the consequences of Summorum Pontificum in parts of Europe is that Pope Benedict has divided the Satanist community into Usus Antiquior and Usus Recentior Satanists. According to priest friend in Bologna, "the Old Riters are much more dangerous".

Poor priest! He deserves our prayers for a speedy recovery. Hopefully he will never stop saying the EF of the Mass. It just goes to show how powerful the EF is!

Pope Pius XII used to say that his favourite of all the prayers in the rituale romanum was exorcism, and if you ever get the chance to see his rituale you will notice just how used the exorcism page was!

In answer to your question, I think we can all guess what is the more hellish of the two. The image of a black mass celebrated with guitars, a happy clappy gloria and jesus loves you all is actually quite comical!

This is a shocking story and I pray that the community will rally to support their priest. God bless and keep him. However, there is another issue which is disturbing.

Fr. Zuhlsdorf’s reporting was fine until he wrote “But this is how liberals work. They use violence, either by words or by actions.” Such a statement, which he made without any elucidation, is an egregious generalisation.

Although violent action is not limited to either side, it very much tends to come from those of a more conservative leaning e.g. the Oklahoma bomber, the Branch Davidians, the Jonestown massacre, the Cambodian genocide and the recent tragedy in Oslo, to name but a few. Even the heinous al Qaeda are as far right as one can possibly imagine. None may be even remotely described as ‘liberal’.

As for violent words; good grief, one has only to read (orthodox) Catholic blogs to be horrified at the degree of vitriol hurled around. Just within the last couple of weeks 2 of the bloggers I follow have expressed great sadness at the lack of charity in some comments. Deacon Kandra of the ‘Deacon’s Bench’ felt it necessary to suspend comments temporarily and Monsignor Pope (who runs the blog for the Archdiocese of Washington DC) just recently lamented not only about comments he called ‘plain rude’ but about increased profanity. Your own, very enjoyable, blog has not been exempt from those who excoriate others or reduce their comments to a highly personal level. God alone knows how many you have refused to publish because of what was written.

Those of us who profess to be more orthodox in our Catholicity need to be very careful of the tendency to become pharisaical.

Prayers for this poor priest. It seems that our common enemy hates the Church's traditions, and especially the Latin Mass in the EF.

I remember reading how Fr Gabriele Amorth, the Roman exorcist, had once said that the older Rite of Exorcism in Latin was far more powerful than the modern (revised) Rite, as "the Devil hates Latin." At the time someone asked on some forum, "why does the Devil hate Latin as opposed to, let's say, Aramaic?" Someone wrote in reply, "Have you ever tried to conjugate a Latin verb? No wonder the Devil hates it!" lol.

Another reason for Bishops to kick the Freemasons out of their Diocese Offices and parishes; they keep strong Catholic men from being Sacristans.

Men that would protect the Priests with their blood and with their souls.

Bishops need to be forced (Including my Bishop here in Phoenix, Arizona, USA) to throw the bums out.

We need to go back to the traditional ways; Sacristans that are tough guys.

Men that live with the Padres and are their drivers, errand boys, and so on.

Clearly this excludes men that suffer from skirt burn, or are led around by the noses by their wives.

The only thing stopping this are weak Bishops that will not rid their Diocese of Freemasons in position of authority in their Dioceses.

Once a Freemason tried to sucker punch my Priest and Confessor; I was on him like white on rice.

He and his pals backed down when they realized how high the stakes were..

Anyone that would harm a woman's child in front of her deserves Death.

Fr. Zuhlsdorf’s reporting was fine until he wrote “But this is how liberals work. They use violence, either by words or by actions.” Such a statement, which he made without any elucidation, is an egregious generalisation.

Although violent action is not limited to either side, it very much tends to come from those of a more conservative leaning

First paragraph - I was also rather saddened to see that silly comment.

Not sure why the later comment below wasn't sent to the recycle bin.

"Clearly this excludes men that suffer from skirt burn, or are led around by the noses by their wives."

Father Ray, you have a number of loyal and interesting female commenters. I hope they smile at the above.
I have never suffered from "skirt burn". It must be painful.
I hope my wife does not read this(away on business) as her laptop is likely to burn and explode with indignation.
St. Michael Come To Our Defence watch out for Pat (though she is likely to use a pseudonym!)

It is refreshing to a Priest to shoo the women out of the Sacristy and send them home to have babies, be obedient and submissive to their husbands.(I don't care to compose a litany to placate Liberals).

Men should not live in fear of their wives.

Our current condition can be placed squarely on the disobedience of women.

Father Hernan has only brought back some of the Church’s former traditions, such as banning guitars from the Liturgy and replacing them with Gregorian chant.

The final straw that broke the camel's back, was when he canned the Women from serving Mass; Eucharistic Ministers/Lectors/Priestettes.

I'm personally glad that the devil probably doesn't like Latin. I was fortunate enough to learn Latin at school and it's a language that manages to be concise and yet melodic; I find it beautiful.
What an awful story from Italy; poor priest.
@ St Michael Come To Our Defence: I greatly enjoy your posts, which are always so fervent and vivid; and informative. I share your distrust of Freemasonry in the Catholic Church, or any such allegiances actually. I'm right beside you on "tough sacristans". But: "Clearly this excludes men that suffer from skirt burn, or are led around by the noses by their wives". Come now SMCTOD!
Men should cherish and respect their wives, and vice versa, rather than either party being led by the anything other than the hand or heart. As for skirt-burn: I've only ever encountered this in a summer frock plus rusty iron situation.
Christian / Catholic women are not all of the fallen-but-saved variety. Some have families, some have partners, some of us are celibate. The church needs women in it's congregation and indeed it's family. There's been much talk on this blog of late of "bad" men. Of course there are also women who are immoral, but this shouldn't be seen as an attribution of gender.

"... "Clearly this excludes men that suffer from skirt burn, or are led around by the noses by their wives". Come now SMCTOD!..."

I apologize to you for having offended your womanhood.

The people I intended those statements for know of what and to whom I speak.

"We have to build, while the others are demolishing. The crumbled citadels have to be rebuilt, the bastions of Faith have to be reconstructed; firstly the holy sacrifice of the Mass of all times, which forms saints; then our chapels, our monasteries, our large families, our enterprises faithful to the social politics of the Church, our politicians determined to make the politics of Jesus Christ – this is a whole tissue of Christian social life, Christian customs, Christian reflexes, which we have to restore."

We men cannot do this if our manhoods reside in our women’s purses.

Padres cannot exercise their full authority if men have to check with their wives first.

God be with you, Madam, and may He bless the work you are doing in His Kingdom, and in our Mother's garden, which is the Holy Rosary.

Thank you kindly for your eloquence, as ever, SMCTOD. I realise that some men of the cloth and other devout men traditionally place distance between themselves and women to safeguard chastity and possibly strength of purpose. I'm aware of the reasoning behind this.
I simply wanted to say that through the history of Christianity and throughout the Catholic Church in this age, there are women who are also staunch defenders of sacredness and the Christian social life, customs and reflexes you so rightly refer to.
Women are naturally ocurring in this world, like flowers, as God's creation. Like flowers, some may well be pleasing to the senses, but for all of us, any perceived fragilities are our strength. And like flowers, I do not believe that God created women as a diversion.
A women's faith, integrity and courage can be equal to that of a man.
I admire the fervour with which you proclaim your faith SMCTOD! Bless you for it.
Personally, I would be alarmed to find any manhood in a purse. Having checked, I'm reassured that there is simply the change to buy milk and soda bread there. :)
To get back to Father Ray's original post: I now understand this poor priest has withstood a catalogue of threats and abuse. Where has the support of the church hierachy and the protection of the usual authorities been in this case? I realise this is a relatively small community in Italy; surely Italian reportage seeps into the Vatican quickly? The notion of a Catholic priest being beaten up and taunted with the devil for saying the mass in Extraordinary Form has a medieval chill to it.

Only if a woman chooses to lower her standards.

We must continue to offer our prayers on behalf of all Priests, good or bad.

Pray for the Holy Father.

All great men have been raised by women.

No man ever raised a great son.