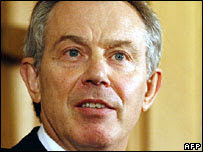 Dealing with problem families is not a question of "marriage versus lone parents", Tony Blair has said.
The prime minister said he believed that marriage was "a good thing", but he said anti-social problems were not limited to single parent families.
He said specific intervention was needed to target dysfunctional families whose "kids have gone off the rails".
Tory leader David Cameron has said that absent fathers and a lack of role models was fuelling gang culture.
Following the deaths of three teenagers in south London, within weeks of each other, Mr Cameron said he backed tax breaks to help families stay together and supported promoting a "culture of responsibility and respecting authority".
'Shut out'

At his monthly press conference Mr Blair said, when it came to the most dysfunctional families who were "shut out" of mainstream society, specific intervention was needed at an early stage.
"In my view, the debate is not about marriage versus lone parents. The debate is about how you target measures specifically on those families some of whom happen to be lone parents - but some of whom are couples."

He said it was important to support lone parents who wanted to get back into work and said Labour policies such as Sure Start and tax credits had benefited all types of families.

"Of course it is the case it is better to have kids in a stable relationship. Of course marriage is a good thing."
But he added that with the most severely dysfunctional families, their problems went "far far deeper" and required "tough measures with support at a very early stage".
'Bias free'
Mr Blair's comments came ahead of a speech later on Tuesday in which Education Secretary Alan Johnson will say family policy must not be biased in favour of marriage - saying taxation and law does not create strong families.
"Our family policy must be bias free... it's not who or what the parents are, it's what they do," he will tell a Relate conference.

"Bias free", well in the UK the tax policy actually advantages the seperated or co-habiting couples and single parents. Giving some tax advatange to married couples would give the impression that the Government actually thinks that marriage is worth supporting.

Mr Blair goes on about dysfunctional families.They are dysfunctional because of the Education system that has for two generations continually excluded slow performers from school instead of persevering and doing the job they are paid for.It seems that the League Tables have a lot to answer for,they should be done away immmediately.They like to blame the Parents but the Parents have had the same treatment.People are being shot for not showing respect,what respect have they ever had?

Having been brought up in a single parent household due to governments consistently and persistently pursuing a family-unfriendly policy (getting involved in wars), I would firmly assert that they are a BAD THING. Sorry Tony.

As for taxation, people's labour shouldn't be taxed anyway so the question of whether taxation should favour single people or households should not arise in the first place.

This misplaced taxation has a knock-on effect on things like the availability of work and housing, which have a profound impact on families.

Worrying it is the EDUCATION SECRETARY who is saying, presumably this is why schools are valuefree.