The tomb of Jesus 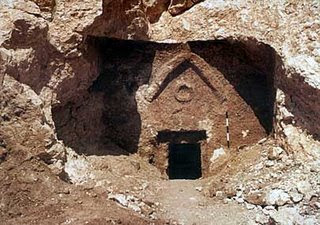 It is coming up to Easter therefore it is time for every loon to...
I really can't be bothered with this nonsense but read Ben Witherington
at February 27, 2007

I guess it is true that a prophet has no honor in his own country.

On his blog, Witherington fired a final salvo by referring to the Titanic and saying Cameron “has now jumped on board another sinking ship full of holes, presumably in order to make a lot of money before the theory sinks into an early watery grave. Man the lifeboats and get out now.”

In 2003, Witherington and co-author Hershel Shanks, editor of the Biblical Archaeology Review, wrote in The Brother of Jesus that they believed an ossuary bearing the inscription “James, son of Joseph, brother of Jesus,” was authentic.

A few months after The Brother of Jesus was published, Israel’s Antiquities Authority decided that the ossuary was a fake. It charged the ossuary’s owner, Oded Golan, with fraud and illegally selling archaeological artifacts outside of Israel. His trial continues, 21/2 years after it began.

Witherington said that he and Shanks stand by their conclusion that the ossuary is authentic and are not likely to change their minds, regardless of the trial’s outcome.
—-

“This is probably going to be the biggest New Testament find in my lifetime, as big as the Dead Sea scrolls,” said Ben Witherington, a New Testament professor at Asbury Theological Seminary in Wilmore, Kentucky.
National Geographic News
http://news.nationalgeographic.com/news/2002/10/1021_021021_christianrelicbox.html

If Witherington can be such a zealot about HIS OWN wacky claims about HIS OWN phony ossuary, it would only be sporting of him to cut Simcha Jacobovici (Witherington’s former partner in crime. He was the man who helped Witherington hype his own phony “James Ossuary” about 4 years ago.) and James Cameron some slack.

Here is one example of Witherington using his own phony ossuary to attack the Ever Virginity of the Mother of God:

It is possible the inscription on the ossuary—”James, son of Joseph, brother of Jesus”—provides us with a challenge in regard to some basic Christian assumptions about James. The Roman Catholic tradition is that Jesus’ brothers and sisters actually were cousins; Orthodox Christians believe they were Joseph’s children by a previous marriage. The inscription conflicts with both of those Christian traditions, in fact, for there certainly was an Aramaic word for “cousin” that could have been used in this inscription but was not. If Jesus was the son of only Mary, and James was the son of only Joseph, then Jesus and James would not literally have been brothers, as this inscription states.”