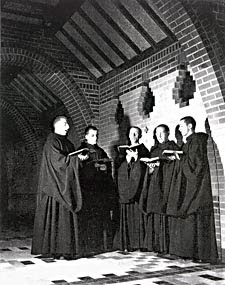 I have just been listening to the Sunday Service, on Radio 4, from Aberystwyth, whilst I was reading through the Blogosphere. There was a rather good sermon by a Canon Bell but it was punctuated by absolutely horrid music, even old classics like Immortal Invisible and Stand up, Stand up for Jesus, were accompanied by crash, crash, bang, bang, with hideous percussion, a slightly out of tune brass instrument.

I felt like one of those snakes that the odd American fundamentalist, charismatic church uses to testify to the text, “You shall pick up deadly serpents in your hands and remain unharmed”. They are left near the loudspeaker, whilst devotees dance, stomp near them, so the poor things are so traumatised, they have forgotten they are snakes, and are danced with by their handlers, who do indeed remain unharmed.
Catholic music is something different, I was reading a brief obituary of Dom Jean Hesbert-Desrocquettes, a monk of Quarr, there were these two sentences:
“He was a musician of genius; but for him the chant was the heart of the life of prayer; it would be a thing of beauty in the measure in which it expressed and nourished prayer, and it would express and nourish prayer in proportion to the loving care given to its execution.
And the same deep spirituality was both expressed and concealed by his utter simplicity; it was expressed especially in his love of 'the brethren, and it is for this, as well as for his influence for and through the chant, that he will be most remembered at Quarr and his loss most regretted.”
It is not just the words that are prayer but the music too, chant leads us into a deeper understanding of the text, that is important, but the sound, the actual melody leads us into prayer. There is a perspective in traditional chant with a vanishing point that draws us beyond ourselves to God. I don't know if one can compare it to the Buddhist chanting of "Ohm", but there seems to be something which unites, the great tradition of Catholic, Orthodox and non-Christian chant.
The crash, crash, bang, bang type of music leads us nowhere, just to ourselves, and indeed it leads us to a spiritual trauma.
I am not sure that Victorian hymns are much better, I admit I do not understand the correlation of chant prayer, I would be grateful for your thoughts on this subject.
at October 28, 2007

Interestingly a similar debate as you envisage is being conducted on Shawn Tribe's Blog The New Liturgical Movement.
http://thenewliturgicalmovement.blogspot.com/
You may well be interested in the comments there. I feel that I do not have sufficient musicla backgound in me to give anything other than an amateur opinion. Michael Lawrence, further down on that blog gives a You Tube excerpt of a Mass by Bruckner which moved me greatly.
You can access that at :-
www.youtube.com/watch?v=fDYc2eM9ZCk
That's MY kind of music!

John,
The Bruckner, I find very beautiful, and its beauty moves one to prayer, but I am suggesting there is a different quality in ancient liturgical music, that goes beyond beauty. I think it is something about how the sound moves, certainly something about breathing, and phrasing, possibly about modalism.
Thank you for pointing me to NLM.

I find that only Chant is not distracting when I'm at Mass.

Every other sort of music is enjoyable, to be sung with gusto or annoying, or done well or badly, or awful,...

Only chant is totally fixed on the texts and the prayer. No named composers, no egos involved. It's not metered either which is unusual for Western Music and that lends it a great flexibility.

It would be very interesting to know what a religious who sings all the Offices in it thinks.

The other important development we need to have as a constant bench mark is the sense that the hymn tradition that has developed both in the protestant church and in our own in recent years [and I am not talking about the Office Hymns as that is a rather different matter] comes out of the devotional life and has no place in the Sacred Liturgy.

‘O happy flowers, O happy Flowers, that stand around for hours and hours’ as Fr Fader writes as expression of his love and faith in the Blessed Sacrament is wonderful but he would not be happy to see this sung at Holy Mass.

When the reformers went off and did there own thing they used this devotional and poetic language to make the ‘new liturgy’ more popular. After Vatican II we dropped the chant and put in its place the devotional hymns [which don’t get me wrong I do love and have a very important part to play in the life prayer and devotion] into the Holy Mass thus making the ‘New Liturgy’ more popular so all could sing. This still has life in modern church music and I am sure I would upset the apple cart to many a modern composers or choir: but this music is basically devotional.

We need to ask are selves do hymns have a place in the Mass, and I am not quite sure what the answer is?