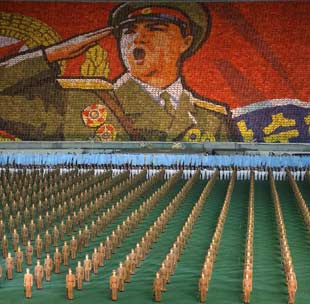 Msgr. John Chang, is part of Roh’s presidential delegation marking the second visit in 60 years to North Korea. The bishop of Daejon speaks to AsiaNews: religious freedom is not on the agenda, but a Catholic presence in the group is important.
Seoul (AsiaNews) – The president of the Korean Bishops Conference, Msgr. John Chang, is in North Korea with President Roh’s delegation. Msgr. Lazzaro You Heung-sik, bishop of Daejon and president of Caritas Korea confirmed the bishops participation in the visit speaking to AsiaNews, adding: “Even if religious freedom will not be discussed by the two leaders, the presence of our President among the Seoul delegation is very important”.

The prelate expressed “great joy” at the visit which began today, the second such trip in 60 years, because “this invitation shows that even North Korea is beginning to understand the importance of dialogue. Moreover this trip opens new and different paths of opportunity compared to 2000 [the first visit by a delegation from the South to Pyongyang ndr], because it forces the two protagonists to face the problems afflicting the two nations”.

These “are very different problems, but without doubt the most urgent remains the humanitarian crises in the North, in the wake of the devastating floods this summer. I believe that this is the real reason behind Kim Jong-il’s shoft in attitude to President Roh, but also in the group of 6 talks which are discussing nuclear disarmament”.

In fact the regime “knows that without international aid it risks witnessing another travesty among its people and that this time it would mark the end. As president of the national Caritas, I can say that these people are really in dire need of almost everything, from medicines to food: the path to healing for that nation however, is a path of dialogue. The only alternative is complete destruction”.
at October 03, 2007