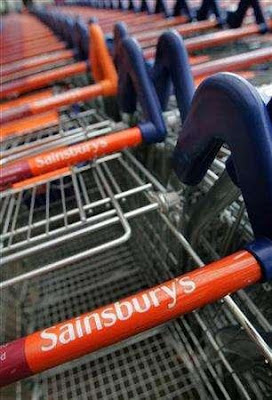 from The Times online
MUSLIM supermarket checkout staff who refuse to sell alcohol are being allowed to opt out of handling customers’ bottles and cans of drink.
Islamic workers at Sainsbury’s who object to alcohol on religious grounds are told to raise their hands when encountering any drink at their till so that a colleague can temporarily take their place or scan items for them.
Other staff have refused to work stacking shelves with wine, beer and spirits and have been found alternative roles in the company.
Sainsbury’s said this weekend it was keen to accommodate the religious beliefs of all staff but some Islamic scholars condemned the practice, saying Muslims who refused to sell alcohol were reneging on their agreements with the store.
Islam states that Muslims should not consume alcohol, but opinion is divided on whether it is permissible to be involved in the sale of it.
Mustapha, a Muslim checkout worker at the company’s store in Swiss Cottage, northwest London, interrupts his work to ensure that he does not have to sell or handle alcohol.
Each time a bottle or can of alcohol comes along the conveyor belt in front of him, Mustapha either swaps places discreetly with a neighbouring attendant or raises his hand so that another member of staff can come over and pass the offending items in front of the scanner before he resumes work.
Some of the staff delegated to handle the drink for Mustapha are themselves obviously Muslim, including women in hijab head coverings. However, a staff member at the store told a reporter that two other employees had asked to be given alternative duties after objecting to stacking drinks shelves.
Mustapha told one customer: “I can’t sell the alcohol because of my religion. It is Ramadan at the moment.”
His customers did not appear to have any objection to his polite refusal to work with alcohol. One said: “I have no issues with it at all, it really doesn’t bother me.”
....

“Sainsbury’s is being very good, they are trying to accommodate the wishes of their employees and we commend that. The fault lies with the employee who is exploiting and misusing their goodwill. It makes no difference if it is only happening over Ramadan.”
Ibrahim Mogra, chairman of the inter-faith committee of the Muslim Council of Britain (MCB), said: “Muslim employees should look at the allowances within Muslim law to enable them to be better operating employees and not be seen as rather difficult to cater for.”
A spokeswoman for Sainsbury’s, confirming Mustapha’s stance, said: “At the application stage we ask the relevant questions regarding any issues about handling different products and where we can we will try and accommodate any requirements people have, but it depends on the needs of the particular store.”

And what about Catholics and contraceptives or pornography?
at October 07, 2007

This of course could be be another Googly.

Where will this end? Will orthodox Muslims (and Jews) for that matter also refuse to handle pork or shellfish, sherry trifle or wine gums...? I don't want to see the following scenario becoming legitimate in this country. My grandmother, who lives in a Muslim land far away, but is a Christian, was seriously ill in hospital and in great pain. She was ignored by the Muslim doctors and nurses who refused to touch her and had to wait some time for a non-Muslim consultant to see to her needs.

I am not convinced that everyone appreciates the subtle difference between a can of Stella and a pork chop, and a human being. The trouble chemists with religious convictions have got themselves into for refusing to sell the morning after pill, speaks volumes.

I'm a grad student in the U.S., and I am writing my thesis on paintings of saints. I had to ask my dean and advisor for help with finding a professor who didn't use Marxist methods of scholarship, such as New Historicism, a method that is quite insiduous. Thankfully, they are helping me, but it's been time-consuming and costly, and I haven't even started writing yet.

The problem with contemporary art historians is that almost all are feminists, so they use their lectures to attack the Catholic Church (and the paintings) with Marxist feminist theory and anti-Semitology -- all of it, of course, is lacking any evidence, but this is the current state of education. Scary.

Catholics who refuse to dispenseor handle contraceptives are of course a bigoted obscurantist minority whose consciences can safely be overridden.

My last comment (anonymous) was written quickly because I had to get to Mass, but it needs some qualifying. Here goes:

My point is that Catholics can opt-out of Marxist secularism, especially blasphemy of sacred images, because of the Code of Canon Law (Title IV,cc. 1188-1189). One of my professors tried to force the use of B.C.E./C.E. instead of B.C./A.D., and I withdrew from the course -- kind of like the Muslims raising their hands when alcohol comes passing through the check-out line -- because using BCE/CE would be denying Christ.

well since I heard about Innocent smoothies from Mac 'Mulier Fortis'; I have refused to put them out on the shop floor shelves on grounds of being a catholic who cannot conspire in any way with a company who pays directly for the funding of abortions. Nobody has said anything in response so far...

A propos of the use of "BCE" as a replacement for "BC" and "CE" for "AD" -- I have unilaterally decreed that "BCE" means "before the Christian Era" and "CE" means "Christian Era." The Catholic Church should do likewise in order to checkmate the secularists. If they want to re-invent language for their own purposes, why can't we play them at their own game?

This whole issue is a minefield. There is one point: alcohol in and of itself isn't evil. And you've got a Muslim culture foisting their values on a non-Muslim country. You can argue "it's their country too" but one has to ask why did they leave their home country to begin with. (By and large.) The shouldn't make Britain the same hell-hole they left. There have been Muslims in the UK and the US for quite a number of years now, but only recently have they suddenly "discovered" their need for sharia law.

Here in the US there are a lot of Muslims in the Detroit area - there have been many cases of Muslim cab drivers refusing to give lifts to people with guide dogs, because dogs are "unclean" in their culture. This clashes with all sorts of local laws protecting people with disabilities - guide and assistance dogs are to be given public accommodation.

they've also tried to pull the "I work in a liquor store, but I shouldn't have to dispense alcohol" stuff. If it's that important, they need to make their own stores which don't stock alcohol. No one is forcing them to work there.

My feeling is that they are pushing these buttons now trying to get us to bend to sharia law eventual. In many radical groups this is the stated goal. They are trying to wear people down with fear of lawsuits. I do not know if you are aware of the "flying imams" case here in the US - but there were a number of prominent so-called imams that were acting deliberately provocative trying to upset airline passengers. Apparently, "we" are supposed to "tolerate" a bunch of Arabs screaming "allah Akhbar" at flight time, all wanting airline seat extensions (when none were overweight enough to warrant them) and a lot of other provocative details I've forgotten. (Just google "flying imams" and the story won't be hard to find.

I'm not saying the west is perfect, by any means - but it seems these people have reached a critical enough mass as a percentage of western populations and the radicals are trying to break us all.

Now let's see a Christian stand up for the right not to work on Sundays.

Contraceptives and pornography indeed! Sad thing is that so many 'catholics' see nothing wrong with either. Poor formation.

What upsets me is when good Catholic doctors and nurses with properly informed consciences dare to object on religious and moral grounds to involvement with abortions, prescribing the abortifacient pill and contraceptives and are FORCED to do this or resign from the NHS.

Booze and pork - oh please! What was that about 'it's not what goes into the mouths of men, but what comes out..... etc'.

Yes it certainly got the xenophobes worked up.Why can we not live together in harmony and respect each others beliefs,this sort of publicity does nothing at all for PEACE.

Nickbris - you are right of course exept for the simple fact that all the 'living in harmony' bit is rather one sided don't you think!

Mosques in the UK = thousands
Catholic churches in the Muslim Middle East = zilch!