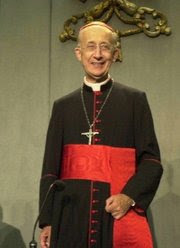 ROME, OCT. 28, 2007 (Zenit.org).- Benedict XVI's vicar for the Diocese of Rome expressed his hopes that religious men and women increase their use of information technology, and thus take advantage of what he called a new form of apostolate.

Cardianl Camillo Ruini spoke to the religious at the Pontifical Urbanian University during the diocesan gathering of the Union of Major Superiors of Italy, which represents 1,287 communities and 22,000 religious in Rome.

According to the Roman diocesan weekly RomaSette, Cardinal Ruini said: "A priest from Novara told me that the theme of 'Jesus' is very much discussed by youth in blogs. The focus, though, comes from destructive books that are widespread today, and not from Benedict XVI’s book ‘Jesus of Nazareth.'

"What will the idea of Christ be in 10 years if these ideas triumph?"

The 76-year-old prelate admitted, "I don’t understand the Internet, but especially young religious ought to enter blogs and correct the opinions of the youth, showing them the true Jesus.”

“The teaching emergency is central in Benedict XVI's concerns," the cardinal said. "For him, education in the faith coincides with service to society, because to form someone in the faith means to form the human person.

"Simply giving motivations for living defeats nihilism and gives value to the human person, a value that is based on Christ himself, the fact that God became a man."

The cardinal asserted that an educator’s testimony and content can matter more than pedagogical techniques.

He called for catechists to be creative in finding occasions for promoting Benedict XVI’s book, saying it shows the solidity of faith in the historical Jesus of the Gospels, and bases the identity of the Christian in a personal encounter with Jesus Christ.

Cardinal Ruini said that in Catholic schools, "the religious can witness to Christ in all their lessons, in the sciences, in history and even in Italian literature, in an inseparable union of faith and culture. Your creativity ought to find new techniques for the vocational challenge, which ought to develop in step with society."
h/t Nova et Vetera
at October 29, 2007

I think this is a good idea. Parishes could reach out to their local lapsed and others through a blog or website that carries free tracts or information.
I have learned so much from sites like EWTN and Catholic Answers.

I only discovered the EWTN site a few days ago and have enjoyed reading the questions and answers available there. I have found the answers to several questions, too minor to bother a priest with. however I now find there is another site telling us to be wary of the contents as it has become too 'modernist.' I am very confused! Can anyone please advise me? I suppose what we need is a surfing equivalent of the old 'imprimatur' especially as there do seem to be many sites which are definitely anti-catholic.

I couldn't agree more with what Cardinal Ruini said in encouragement of Catholic blogs.

I have seen for myself the technology of the internet develop.

Forty years ago, we lived largely in ingnorance of what was going on in the Church

And that was not a good thing.

Nowadays, we know almost instantly what is going on, and who said what to whom, and why, and can share this information with others of like mind in a public forum.

On the whole, this is a good thing.

When printing was invented in the fifteenth century, the Church (in common with several nation states, who saw printing as a subversive activity,) was perhaps slow off the mark to make use of the new technology.

That must not happen this time.

Oh, it has never been easier to spread lies, pornography, etc., than it is today via the internet.

But it has never been easier to disseminate the Truth.

As a reasonably young religious (39) I agree entirely with the cardinal's thoughts. Reaching out to young people is at the essence of my vocation as a teaching Brother, so it seemed just a natural extension of that ministry to set up a MySpace page and more recently a Facebook page where I communicate with former pupils, 6th formers, staff colleagues... as well as family and friends. I also have my own web site to advertise my congregation and put news about school chaplaincy activities. All of these have given me opportunities to evangelise and have brought me into contact with people I otherwise would never have known and with whom I have become good friends.

Our Superior General in Rome is likewise convinced of the importance of using new technology for the benefit of the Church. Recently he asked me to help him set up a blog which we hope will soon become a forum (in French... but more and more messages are getting translated into English + Spanish) for Brothers and lay people to discuss issues and share practice.

Blogging gives obscurantist wishful thinkers a public that otherwise would not exist. It is largely a self-serving enterprise and draws attention to people who otherwise would be passed by on the other side.

ANON, I am sure you are right, but why do you read them then?

The public I seek is not for myself but for Christ, to "make him better known and better loved", as the founder of our order of religious Brothers devoted to working with young people, Fr. Jean-Marie De La Mennais (Breton priest, 1780-1820) said.

You are doing that.