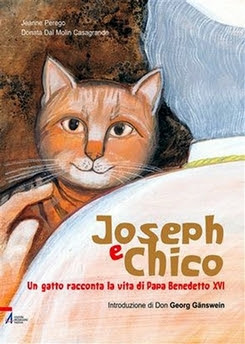 A 9-year-old ginger Siamese cat Chico will narrate the biography of his master, Pope Benedict XVI, in a book, an Italian publishing house spokeswoman said Wednesday.

“The book will be released next week,” she said.

The book’s author, Jeanne Perego, said the book, “Joseph and Chico,” was intended as a children’s book, which describes the pontiff’s life, from his birth until his election as leader of the Roman Catholic Church.

Perego said she has never met Benedict XVI, but always wanted to write a book about him, as, in her opinion, he is an example of diligence, tenacity and sobriety.

In the foreword, Father Georg, the pontiff’s secretary, says: “Here, dear children, you will find a biography very different to others because telling the story is a cat – and it’s not every day that a cat can call the Holy Father his friend and write his story.”

“They have known each other for years and the things Chico has to say are truly interesting – obviously bearing in mind that his point of view is that of a cat,” he adds.

Books, written by pets, are nothing new in literature. “Connie’s Stories,” published in 2005, is the tale of Russian President Vladimir Putin’s dog, a black Labrador retriever named Connie. The 60-page brochure in English was printed by Detskaya Literatura, a publisher of Soviet children’s tales about Granddad Lenin’s kindly deeds. 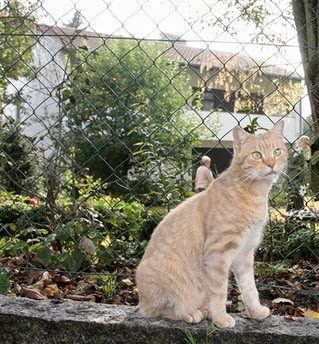 Chico, an eight-years-old cat sits in front of the former house of Pope Benedict XVI. in Pentling near Regensburg, southern Germany on Friday, Oct. 5, 2007.
at October 05, 2007