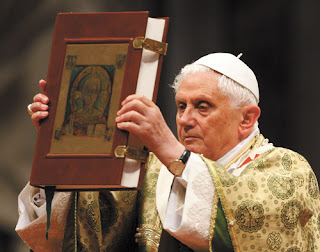 After two years after the Synod on the Word of God the Holy Father has produced Verbum Domini.
The relationship of the Word of God and Tradition to the Church has long been at the forefront of the Pope's mind, he has been credited with being the principle author of the Vatican Council's Dogmatic Constitution Dei Verbum.

FULLTEXT in pdf is here
Below is the Vatican Information Service of the press conference:


VATICAN CITY, 11 NOV 2010 (VIS) - At midday today in the Holy See Press Office, the presentation took place of the Post-Synodal Apostolic Exhortation "Verbum Domini" of Benedict XVI, on the Word of God in the life and mission of the Church.

Today's press conference was presented by Cardinal Marc Ouellet P.S.S., prefect of the Congregation for Bishops; Archbishop Gianfranco Ravasi, president of the Pontifical Council for Culture, and Archbishop Nikola Eterovic and Msgr. Fortunato Frizza, respectively secretary general and under secretary of the Synod of Bishops.

The Apostolic Exhortation, which is dated 30 September, Memorial of St. Jerome, is the fruit of the Twelfth Ordinary General Assembly of the Synod of Bishops, which was held in Rome from 5 to 26 October 2008. The document, which has been published in Latin, Italian, English, French., Spanish, German, Portuguese and Polish, is made up of an introduction, three parts and a conclusion.

Archbishop Eterovic explained how in part one, entitled "Verbum Dei", the Pope highlights both "the fundamental role of God the Father, source and origin of the Word", and "the Trinitarian dimension of revelation". Chapter one - "The God Who Speaks" - underscores "God's will to open and maintain a dialogue with man, in which God takes the initiative and reveals Himself in various ways". It also dwells on "the Christological aspect of the Word, while at the same time underlining the pneumatological dimension". This section of the document also focuses on the relationship between the Eucharist and Tradition, and on the theme of the inspiration and truth of the Bible.

"Our Response to the God Who Speaks" is the title of chapter two of part one. "Man is called to enter into the Alliance with his God, Who listens to him and responds to his questions. To God Who speaks, man responds with the faith. The most suitable prayer is that made using the words which were revealed by God and are conserved and written in the Bible", said Archbishop Eterovic.

Chapter three has as its title "The Interpretation of Sacred Scripture in the Church". The secretary general of the Synod of Bishops explained how "Sacred Scripture should be, as the Dogmatic Constitution 'Dei Verbum' says, 'the soul of sacred theology'. ... The biblical hermeneutics of Vatican Council II must be rediscovered, also in order to avoid a certain dualism evident in secularised interpretations which could give rise to a fundamentalist and spiritualist interpretation of Holy Scripture. Correct interpretation requires complementarity in a literal and spiritual sense, a harmony between faith and reason". This chapter also examines relations between Christians and Jews, noting that they enjoy "a very special relationship ... because they share a large part of the Scriptures".

"The Liturgy, Privileged Setting for the Word of God" is the title of chapter two, in which the focus turns to "the vital link between Sacred Scripture and the Sacraments, especially the Eucharist". The importance of the Lectionary is mentioned, as is that of the proclamation of the Word and the ministry of reader, with particular emphasis being laid on the preparation of the homily, a theme of great importance in this Post-Synodal Apostolic Exhortation.

Chapter three of part two concerns "The Word of God in the Life of the Church" and highlights "the importance of biblical inspiration for pastoral activity, the biblical dimension of catechesis, the biblical formation of Christians, the use of Sacred Scripture in great ecclesial gahterings, and the Word of God in relation to vocations". Attention is also given to "lectio divina and Marian prayer", said the archbishop.

Part three of the document published today has as its title "Verbum Mundo". It draws attention to "the duty of Christians to announce the Word of God in the world in which they live and work". Chapter one - "The Church's Mission to Proclaim the Word of God to the World" - explains how the Church "is oriented towards the announcement 'ad gentes', to people who do not yet know the Word, ... but also to those who have already been baptised ... but need new evangelisation in order to rediscover the Word of God".

"The Word of God and Commitment to the World" is the title of chapter two, which recalls how "Christians are called to serve the Word of God in their most needy brothers and sisters and, hence, to commit themselves in society for reconciliation, justice and peace among peoples".

Chapter three of part three is dedicated to "The Word of God and Culture". It expresses the hope "that the Bible may become better known in schools and universities and that better use may be made of the social communications media, exploiting all the modern possibilities of technology. The theme of the inculturation of Sacred Scripture is also linked to the translation and diffusion of the Bible, which must be increased", said Archbishop Eterovic.

"The Word of God and Inter-religious Dialogue" is the title of chapter four. "Having established the value and topicality of inter-religious dialogue, 'Verbum Domini' ... supplies some important guidelines concerning dialogue between Christians and Muslims, and with members of other non-Christian religions, within the framework of a religious liberty which involves not only the freedom to profess one's faith in private and in public, but also freedom of conscience; in other words, of choosing one's religion".

In the conclusion, Archbishop Eterovic concluded his explanations, the Holy Father reiterates his exhortation to all Christians "to become increasingly familiar with Sacred Scripture".

Shamefully late in life, I discovered the desire to pray and offer works for the remission of the suffering of the Holy Souls. I found that under the usual conditions, it was possible to offer a 30-minute reading from the Bible, either for a partial indulgence or, if linked to a Holy Communion, for a plenary indulgence.

I have been in the habit, for many decades, of reading from the New Testament every day, and so I have concentrated on the Old Testament for this special work; in each case, of course, submitting my own understanding of what I read to the Church's interpretation.

Amazingly, I have managed to achieve something I would never have had the drive to do otherwise: I have now read the entire Old Testament twice, and am nearly halfway through the third reading.

The Holy Scriptures are a spring of wisdom and truth that wells up into one's consciousness in all circumstances of life. I thank God for the impulse that caused me to embark on this wonderful adventure.

Seriously - have you read what it says ?