The Blessed Silence: Christ the Angel 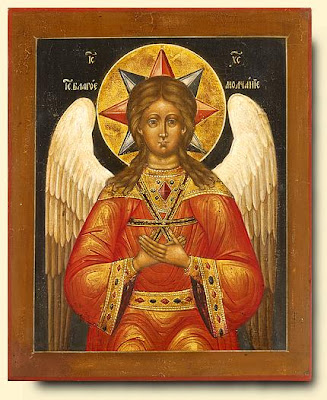 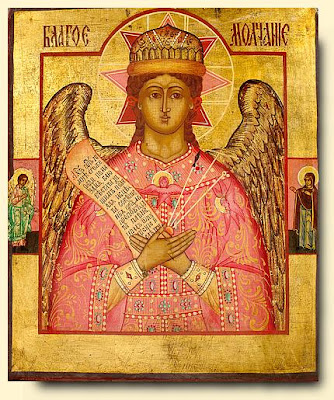 The Temple Gallery, that delightful little icon gallery in Holland Park sent me their catalogue for their Christmas exhibition. I am fascinated by these two icons of "The Blessed Silence". Although this seems to be a particularly Russian devotion, there is in the ancient Roman Canon the reference to the Angel who takes "this offering to Your Altar in Heaven". Presumably the same scripture references support both the icon and the reference in the Canon.
The second icon interestingly shows Christ's heart pierced with instruments of the Passion.

Christ depicted as an angel is based on Isaiah 9:5 who refers to “The Messenger (‘Angelos’) of Great Counsel”. He is the ‘Word in Eternity’ and, according to Coomber in The Icon Handbook, (Springfield Illinois, 1995), the iconography is ‘associated with the Creation and the Plan of Salvation, ordained from Eternity’. Other references from Isaiah are relevant: 42:2 “He shall not...cause his voice to be heard in the streets”; 53:7 “He was afflicted yet opened not his mouth...as a sheep before her shearers is dumb, so he opens not his mouth”. Two four pointed stars, one superimposed on the other, are seen within Christ’s halo; their eight points are said to symbolise Eternity and the whole of Creation. (The Octave is the symbol of completion). Christ is clothed as a bishop (cf Hebrews 4:14 “...we have a great high priest that is passed into the heavens, Jesus Christ, Son of God...”. Seraphim, six-winged, bodiless and traditionally red, adorn the upper part of his chest and arms. The Seraphim, according to Dionysios the Areopagite, are the highest order of Angels and stand at the entrance into Paradise. At Christ’s chest is a Cherub, also bodiless and regarded as second in the angelic order. Christ holds the symbols of the Passion and an inscribed scroll: “Come unto me all ye that labour and are heavy laden, and I will give you rest” (Matthew 11:28). On the borders are the Guardian Angel and a female saint.

The subject was introduced into the iconographical canon in Russia in the 16th century. At that time Moscow, which had recently declared itself the Third Rome, was a milieu of intense theological and iconographical activity. (See N.P. Kondakov,The Russian Icon, OUP 1928, Chapter Mystical and Didactic Subjects).

These icons are indeed artistically magnificent but I do find them unsettling. We believe Christ was 'True God and True Man' and angels are etherial beings so depicting Christ as an angel seems to be contradictory to our beliefs.

Another way of looking at it that Pelerin may find helpful (not that I disagree with Fr Blake's comment) is that just as not all apostoloi are "apostles" (pace those enthusiasts for the "Apostle Junia"), so not all angeloi are "angels".

It is in the normal, general sense of the word that Christ is an angelos, not the technical sense of a spiritual being. He is a messenger, not an angel.

One might feel that translating angelos/angelus as "angel" in this context is a little unhelpful.

In America the Jehovahs Witness's also believe Christ to have been an angel.

Saint Michael came, got crucified, and returned to Heaven, no problem.

For as many ways as the sun can shine upon you, Satan and his pals will have just as many ways to deny Christ.

I think we need to be careful about this icon and the idea that it is Orthodox to portray Christ as an Angel in Icons. I found this discussion - link below:

"The heretics in Novgorod claimed that it is not permissible to paint the Trinity on icons because Abraham did not see the Trinity but only God and two angels. Other heretics rejected the idea of the three hypostases of God altogether. The church fought the heresies with all the means it had -- usually with polemical treaties, but also with force, if necessary. Russian icon painters before Rublev subscribed to the same point of view that Abraham was visited by God (in Christ's image) and two angels. Hence, Christ was represented in icons of the Trinity as the middle angel and was symbolically set apart either by a halo with a cross, by a considerable enlargement of his figure, by widely spread wings or by a scroll in His hand."

I always understood the angel in the Canon Missae was the Archangel Michael. How could Christ be an angel "in conspectu divinae Majestatis tuae"? The simple reading (Angel is Angel and not Christ) makes more sense.

Pablo - no Orthodox believes Jesus, the Incarnate Logos, is an "angel" in the sense of a created, bodiless power. That's not what this icon represents. "Angelos" simply means "messenger", as Fr Ray correctly states. It doesn't, in every context, refer to the bodiless powers. John the Baptist is also shown "winged" in traditional iconography, and so, I think, does St Mary of Egypt, the "angel in the flesh".

"Jesus, angel of great counsel, have mercy on us"

That's from the (Latin) Litany of the Holy Name, which most Catholics calling themselves "Traditional" used to be familiar with (I used to be able to recite it by heart).

Anognotis,
I think you forget the antiquity of the Roman Canon.

Today most scholars seem to suggest the Supplices predates the Councils more refined understanding of the Trinity, and indeed see the Angel as Christ.

I think you forget the antiquity of the Roman Canon

Not me, Father - my remarks are addressed to Pablo, who is under the mistaken impression that it's a deception of the Evil One, foreign to Catholic tradition! The Roman Canon certainly exceeds in antiquity the Litany of the Holy Name, but the title "Angel of Great Counsel" is as ancient as anything. I'm surprised Pablo's never heard it before.

If anyone wonders, while I found this icon odd and strange the first time I saw it, Christ "Holy Silence" is an icon of the pre-Nikonian use of the Russian Church, and is cherished by both Old Believers and Old Ritualists, some of whom are in communion with the Catholic Church.

Therefore it is quite traditional, even if unfamiliar to many people

There is also an icon of an 'angelic Christ" with the Three Holy Youths of Daniel 3. He has the Christological halo with the inscription "Angel of Great Counsel."

No Arianism is expressed or implied by either icon.

I'm glad someone mentioned the icon of John the Baptist (aka John the Forerunner). The one I have, he's depicted w/ wings, and holding a plate upon which rests his decapitated head. So besides wings, you get two heads: one on John, one on the plate.

Western Christians should understand that iconography has it's own unique symbolic language, and that it's not representational art. Go look at icons of the Nativity, or of the Assumption (Dormition) of Mary. All kinds of stuff going on in those.

And we've all seen Western images of Christ as a lamb or the Holy Spirit as a dove.

For those who like more reality in their art, how 'bout a Nursing Madonna altar piece?

If I am not mistaken, these "angelic Christs" were the ikons that Soloviev, Bulgakov and other Sophiologists presented as ikons of Sophia (Holy Wisdom).

I'm coming very late to this discussion, but I was wondering if you know which council the ancient Roman canon you cited comes from.
Thanks.

Roman Canon = the Canon of the Mass, often called "Eucharistic Prayer 1". It is a "Canon" because it is a "list" of petitionary prayers.